This is the world’s largest cotton defoliation operation that involves the use of fully autonomous drones to ensure a cost-effective, eco-friendly machine harvest. Up to mid-September, one million hectares of cotton fields have been defoliated with XAG’s crop spraying drones. It is estimated that the accumulated service record of this year’s operation will exceed 1.3 million hectares, a 200% increase compared to 2018 when XAG served approximately 0.45 million hectares.

Defoliation is the harvest-aid operation which applies chemical to accelerate cotton boll opening and encourage cotton leaves to drop from plants within a specific short period time. It is a necessary process to ensure timely, intensive mechanical harvesting and reduce impurities in cotton fibre.

Traditionally, cotton was mostly handpicked, but this has no longer been a viable solution due to the rising labour cost and the shortage of agricultural labour. Cotton harvesting machines have been widely adopted to improve cost-efficiency while eliminating a great deal of tedious physical labour. In China, for example, Xinjiang constitutes 85% of the nation’s total cotton production forecast at 6.16 million metrics tons this year. According to Xinjiang Agricultural Machinery Bureau, the mechanisation of cotton harvesting has steadily risen from 21% in 2016 to 30% in 2018.

However, cotton defoliation prior to the machine harvest used to heavily rely on manual or tractor spraying, both of which have deficiency that either increases the costs of production or results in certain level of yield loss. When people walk into the densely planted cotton fields for spraying, they might accidentally knock the cotton bolls onto the ground, easily get skin injury by thorns or expose themselves to chemical substances. People are reluctant to undertake such overwhelmingly labour-intensive work.

Spraying defoliant through large ground-based machinery is highly efficient especially when it comes to scale farming. Yet, it would cause crop damage and soil compaction when the tractor crosses over the cotton fields. For instance, in China’s Xinjiang, the economic loss resulted from tractor spraying could range from 16000 to 19200 RMB on a 65-hectare cotton field. In addition, the failure to achieve precision spraying on the appropriate timing might further enlarge the yield gap. 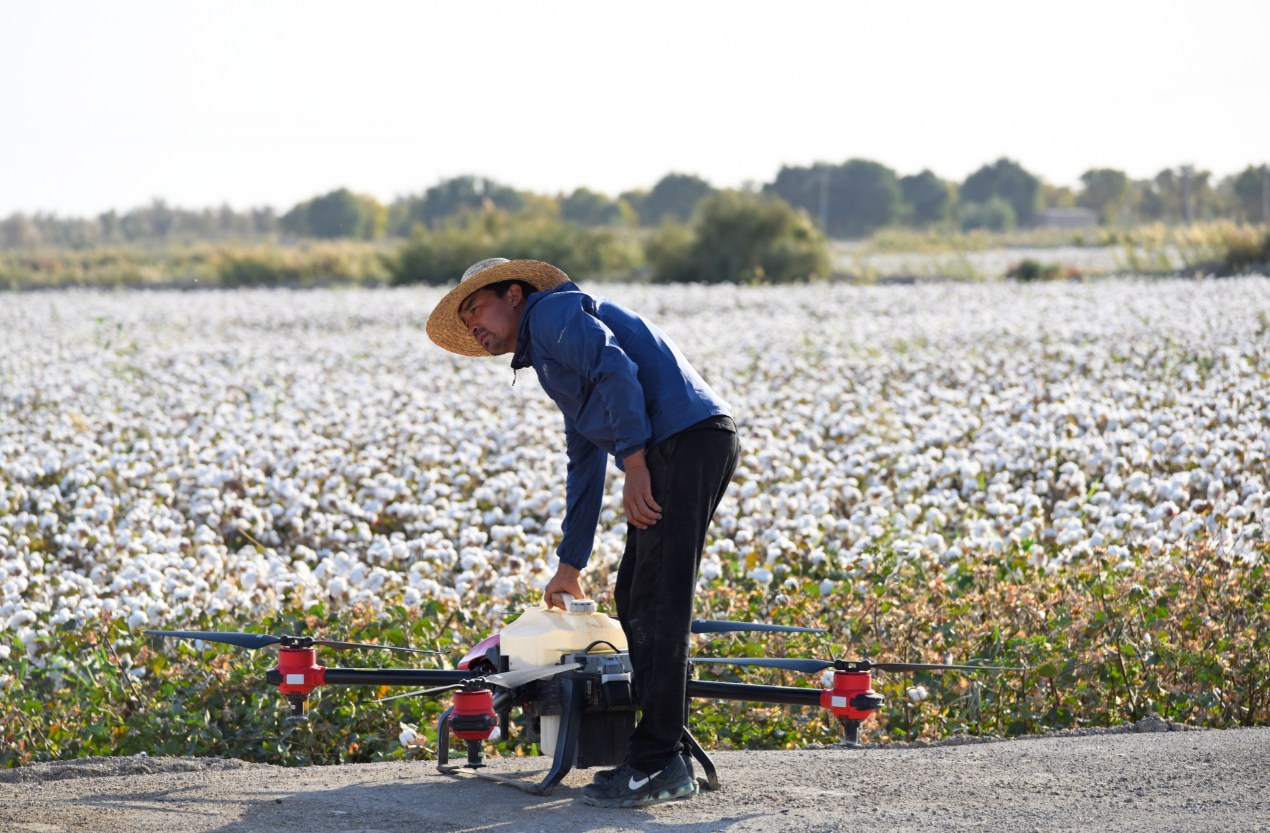 XAG had identified such problem back in 2013 and self-developed a fully autonomous agriculture drone specifically designed for efficient, precise crop spraying operation. One XAG P Series Plant Protection UAS can reach the spraying efficiency of 10 hectares per hour, which usually takes 60 workers to complete.

Real-time Kinematic (RTK) navigation and Intelligent Rotary Atomisation Spraying system are two core technologies that enable XAG’s drone to precisely deliver pesticides and fertilisers. As a centimetre-level positioning technique, RTK is used to correct meter-level errors and enhance the accuracy of position data in the Global Positioning System (GPS). Equipped with RTK, drones can conduct operation on the pre-set flight paths to prevent overlaps or misses while automatically avoid any surrounding obstacles within the croplands to ensure flight safety.

The atomisation spraying system is engineered to atomise liquids into micro-level droplets. The drone propellers can generate powerful downdraft to reduce drifting and ensure that the atomised defoliant evenly adhere to the plant surface. This has proved to conserve 90% agricultural water and save 30% defoliant, compared to the traditional approaches. XAG is the first drone maker to introduce UAS precision spraying technology into the rural area of Xinjiang. To cope with local farmers’ increasing demands for UAS cotton defoliation, XAG deployed over 1000 plant protection drones from all across China and initiated the operation ‘Take Off for Harvest Time’ for the first time in 2017. With the widespread adoption of agriculture drones, the cotton industry has been taking a giant leap forward in sustainability and intelligence.

Since tapping into the smart agriculture sector in 2013, XAG has transformed crop protection approach on a wide variety of crops, ranging from cotton, rice, wheat, corn to fruit trees, with its precision agriculture devices operated under high-accuracy navigation network. Artificial intelligence and Internet-of-Things are also developed to help farmers manage their fields more scientifically as well as creating a transparent, traceable food value chain. Up to mid-September, XAG has offered UAS crop spraying services on 20 million hectares of farmlands, which helped conserve 4.29 million tons of agricultural water while reducing 18600 tons of pesticides and fertilisers.