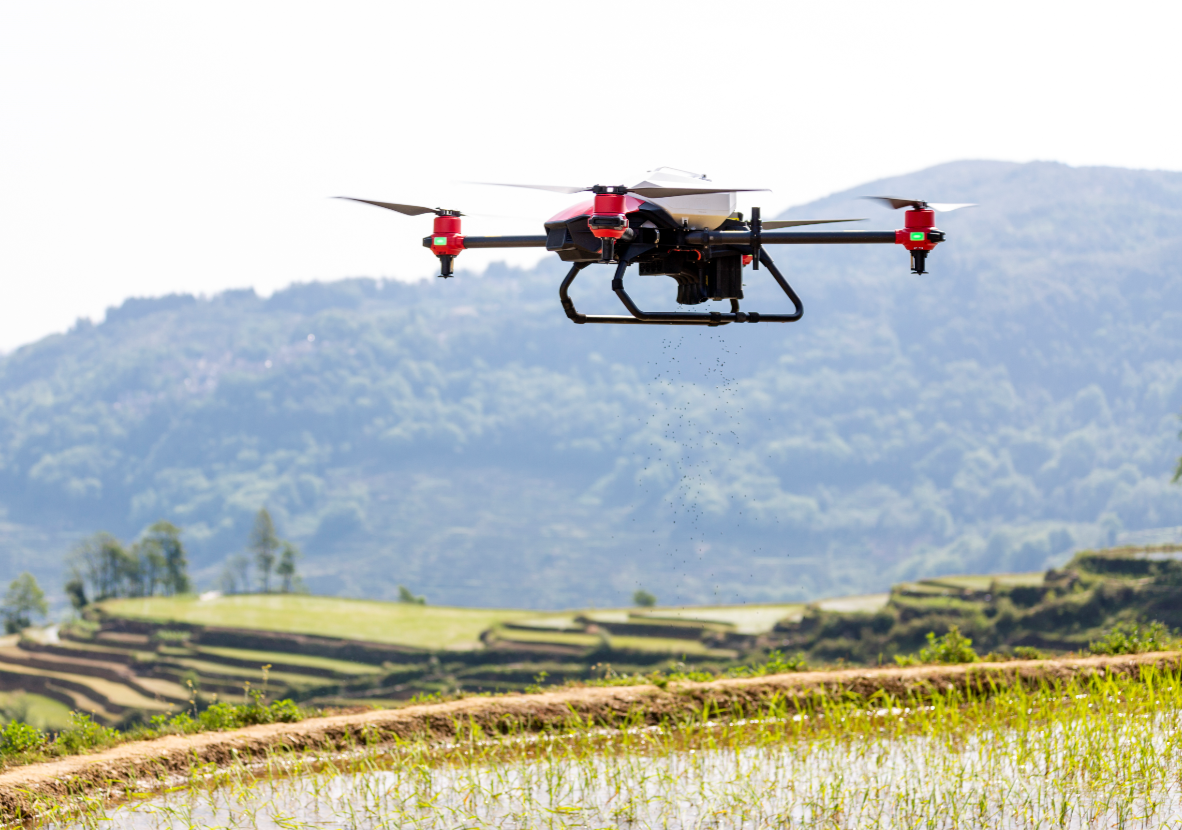 A set of drones in red and white fashion first appeared over the linked pieces of rice terraces in Southern Yunnan of China, waking up the sleepy villages where elderly people form the backbone of rice production. Li Zhenglin, a Hani rice grower in his 60s, gazed down into the hillsides from distance and watched the ‘flying spreader’ release the seeds of hope for the rice planting season. With the advent of drone, he can finally bid farewell to the days of climbing up and down the slopes to care for the paddy fields grown on one of the most beautiful World Heritage Site. 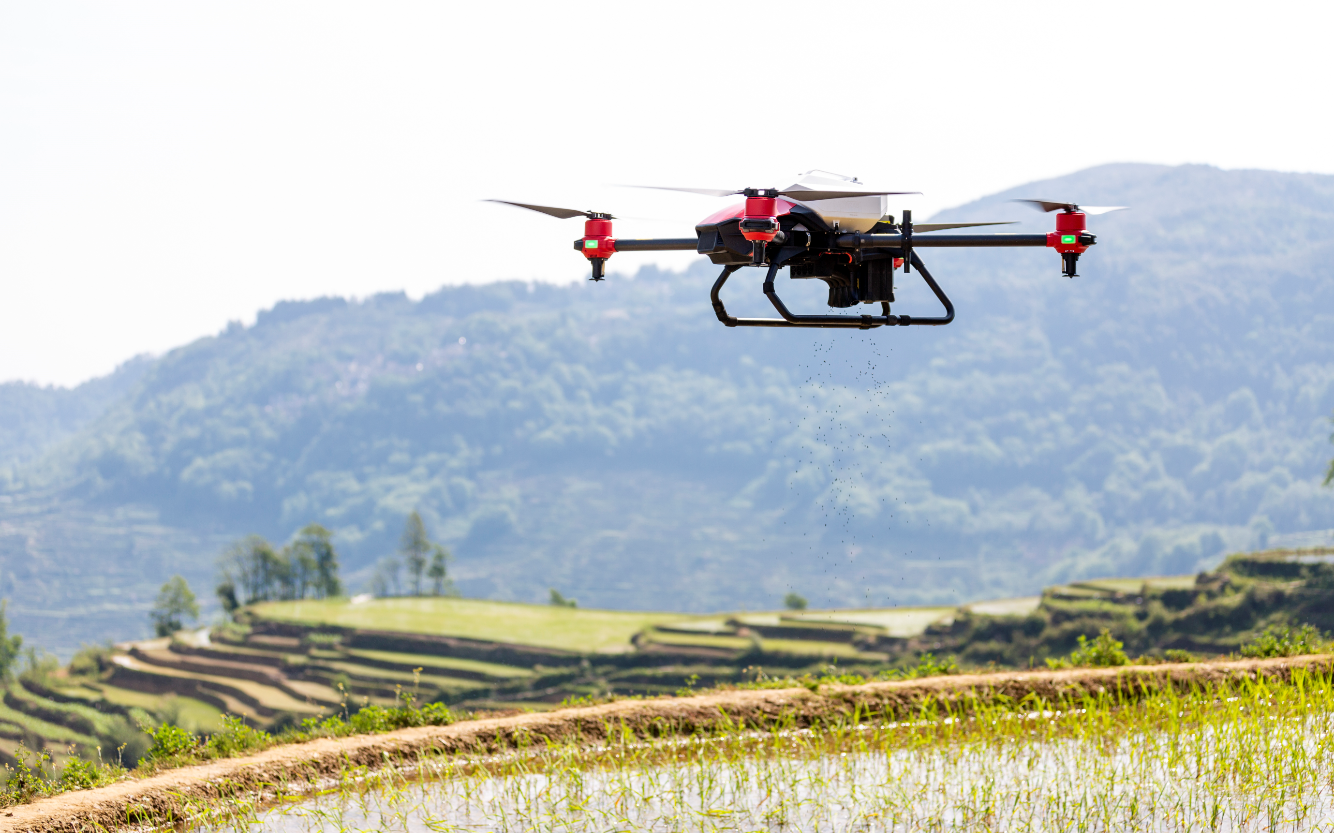 As a product of thousand years of agricultural civilisation, the Honghe Hani Rice Terraces cover an immense area of over 16,600 hectares. It was carved out of a wilderness over the past 1300 years by the Hani people, who have developed an integrated four-essential farming system of forests, water supply, mushroom houses, and terraces, cascading down the slopes of the towering Ailao Mountains. In 2013, it was inscribed as the prestigious UNESCO World Heritage Site.

Red rice is the main crop of this area, sown in spring for autumn bounty once a year and grown in the irrigated terraces bred by buffalos, cattle, ducks, fish, and eels. Though facing the harsh environment of high mountains, the Hani people for centuries have been dedicated to cultivating red rice with heavy manual labour.

But as the decreasing workforce poses both challenges and opportunities, the Hani Rice Terraces is now witnessing a change in the way red rice is farmed. The most cutting-edge technologies, such as drone and AI, are brought here to help the Hani people stand their ground in agriculture.

Crisis: lack of successor to farm

From the first day it was created, the Honghe Hani rice terraces had to be managed with much more efforts due to the complex terrains. The steepest slopes could reach up to 75 degrees, while in some places there are as many as 3000 terraced fields along the hillsides, which at its narrowest point is less than one metre wide. Therefore, large, mechanised ground equipment could not apply to these hilly, mountainous areas. Li Zhenglin, who lives in Jingkou village of Yuanyang County, the core area of Hani rice terraces, started to grow red rice since he was 12 years old. Just like most Hani people, he has safeguarded these terraced fields using primitive farming tools, solely devoted his entire life to the provision of food.

Without the help of modern agricultural machines, Li can only rely on manpower to seed, spread fertilisers, and spray pesticides, which is laborious, tedious, and lacked efficiency. As he grew older in his 60s, he felt physically losing his grip on farm, and a lack of caution might ruin the yield.

The inscription on the World Heritage List has boosted the local tourism economy, driving a rapidly increasing number of tourists to the Hani terraces. However, in the meantime, more and more Hani young people have turned away from the gruelling farm works and chose to abandon the terraces that nourished them. While they seek better jobs for higher income in the city, those left behind in the village to farm were already aged 50 to 70. 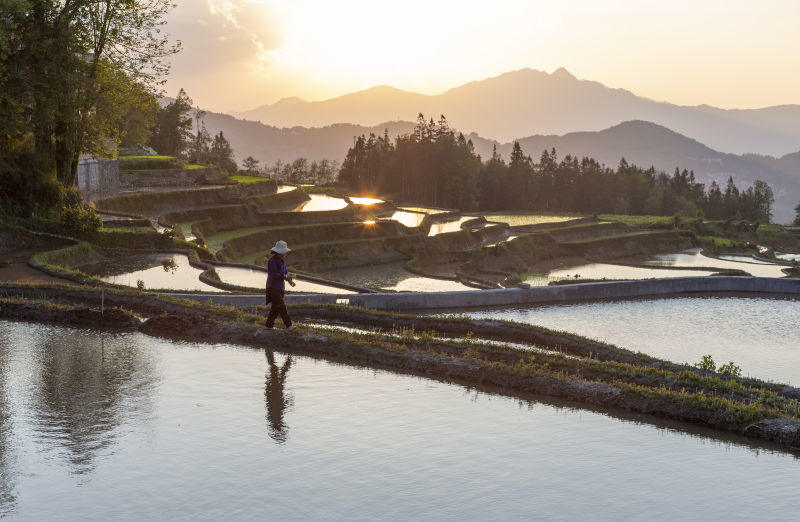 Hani farmer toiled on the terraced fields until sunset

The Hani rice terraces is one of China’s many rural areas which suffer from an ageing population. The long-standing rice cultivation system might be threatened if no one to inherit, risking the loss of both the cultural heritage and the livelihood of the Hani people.

Since this March, the Chinese-based agri-tech firm XAG has been breathing a new lease of life to wake up the “hollow villages” around the Hani terraces.

A group of tech-savvy young people has brought a set of XAG drones to help farmers like Li Zhenglin improve their agricultural productivity. Simply through several clicks on the phone, the drone automatically took off and navigated itself above the terraces, dropping rice seeds precisely into the target areas. This was the first-ever drone seeding operation in Yunnan’s rice terraces, where drones could ride over the steep slopes to grow red rice amid labour shortage.

According to Honghe Agricultural Machinery Research Institute, traditional rice seeding involves a series of procedures, in which the paddy seeds are first sown in nurseries and raised into young seedlings before manually transplanted to the levelled fields. The use of drones in direct seeding of rice requires less labour and time to produce high-quality crops, which can help farmers grow more with less to improve their profits. One drone is estimated to be 10 times more effective than manual seeding. 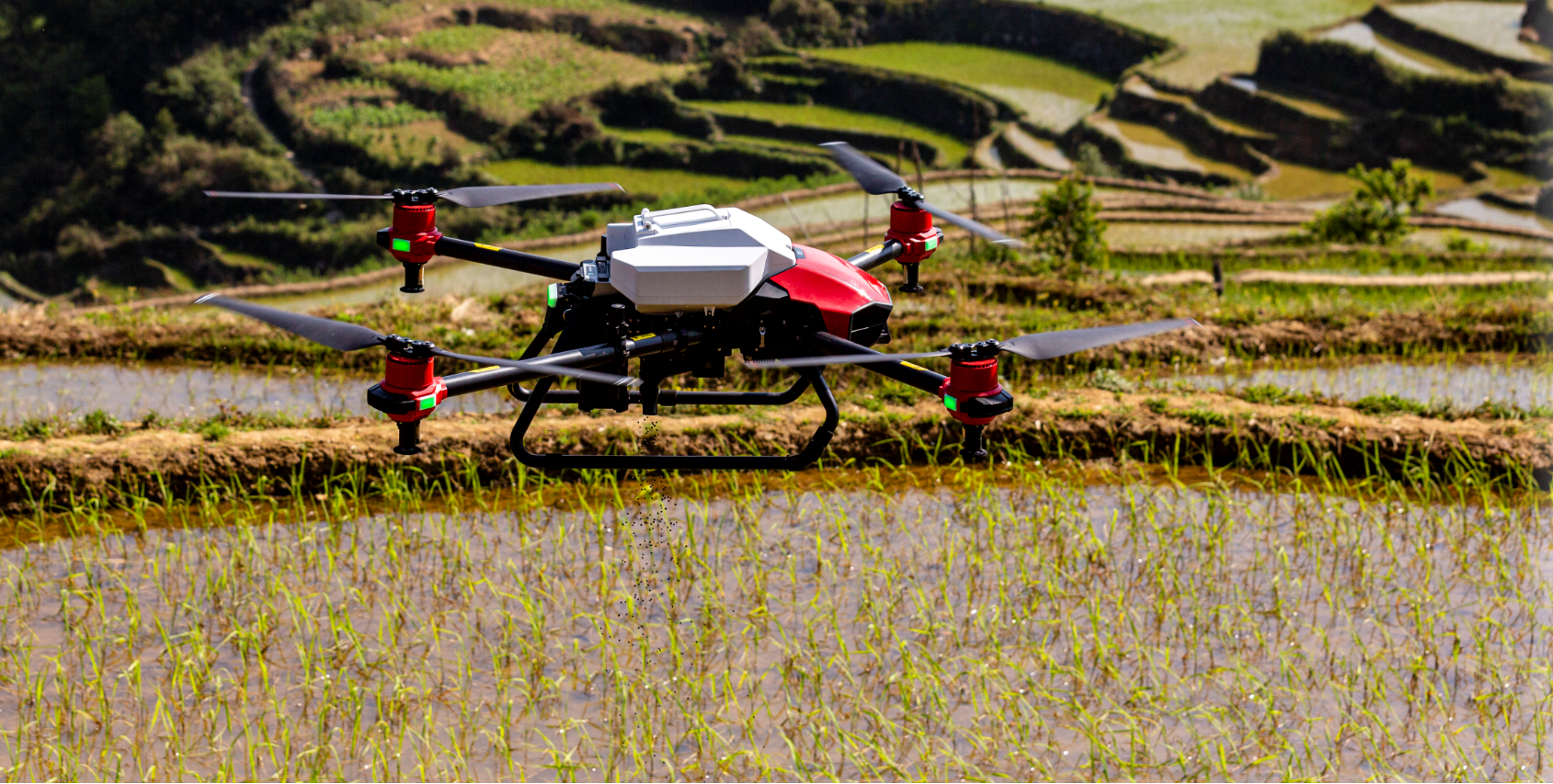 Drone sprayed over the Hani rice terraces against pests and diseases

By flying 2 to 3 metres above the crops, the drone can flexibly adapt to smallholder farms which are featured by smaller land size and scattered, irregular plots. With the imaging radars and AI prediction technology, it can perceive the surrounding terrains and avoid any incoming obstacles to ensure flight safety even on mountainous areas.

Other applications of drone also include spraying pesticides and fertilisation. These farm essentials were once conducted by farmers painstakingly climbing up and down with a knapsack sprayer or bucket of fertilisers.

“In the past, it took up to one day for us to manually sprinkle organic fertilisers on only 0.3 hectare of rice terrace. But now the same amount of work could be completed by one drone in 5 minutes. What a huge transformation that we are tapping into,” Li said. This can also reduce the use of pesticides and fertilisers to protect biodiversity of the terraces, because the drones can only target on where it is needed.

When drones and robots take over the repetitive, exhausting fieldworks, staying on the land would no longer be a tough mission for farmers. The Hani people can free from the constraints of the traditional farming pattern which is labour-intensive and time-consuming. “Most rural young people have left their hometown. If it had not been the help of our new friend XAG, the red rice would be slashed this year,” Li said.