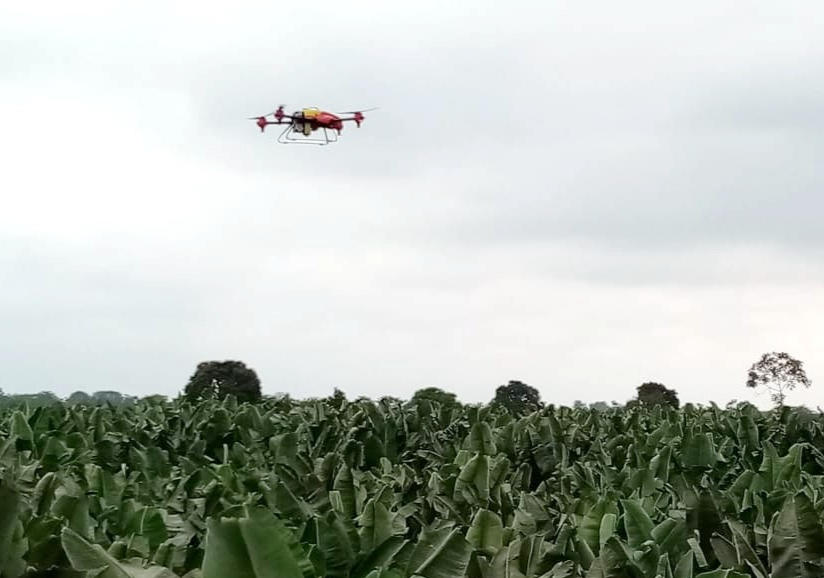 High in fibre and heart-healthy fat, banana is one of the most common superfoods served on our table. However, the stories behind the banana planting industry, littered with bumps and bruises, is hardly known by public. Low profit margin, the difficulty to handle varied terrain, and the overdose of pesticides have plagued the industry for years. People in Asia and Latin America are hence starting to seek for drones as the new farming practice. 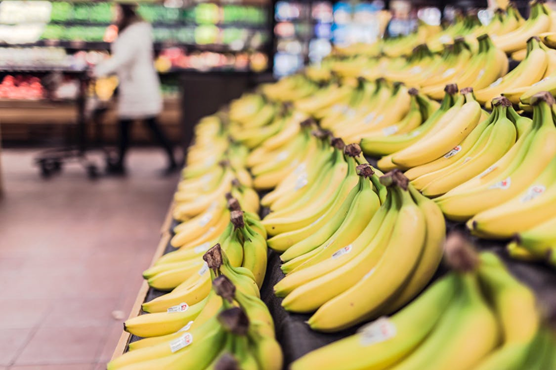 In management of specialty crops, there is a critical yet troublesome issue easily neglected even by sophisticated farmers - Things change with their context: same crop species in two regions would behave quite differently either in their growth pattern or the way they are managed.

As the most commercially traded fruit and the 4th most popular agricultural product in the world, banana is one of the main application areas that XAG taps into globally apart from field crops. However, the sore points of banana tree management in Latin America would not be the same as those from Southeast Asia, so in many cases, our partners have to explore the most suitable solution in their business region and try hard to make it work. 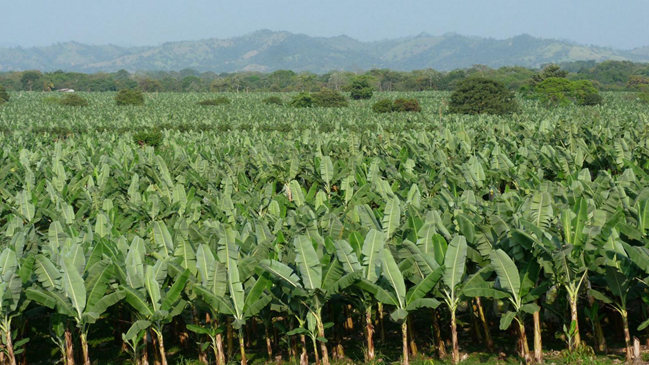 One of the Dole Banana Plantation in Tosagua, Ecuador (Source: Facebook@doleorganic)

Banana industry takes a large proportion of the foreign trade export business of The Republic of Ecuador. In this country, bananas are usually planted in mega scale plantation covering an area over thousands of hectares. Dole, one of the world's largest producers and distributors of high-quality fresh fruit, has its own banana basement in Ecuador. In Dole’s basement, the biggest concern in conducting agricultural chemical spraying might not be how to do this job in the central area of the plantation, but in the edge places of the whole garden.

Ecuador has strict regulations in chemical usage when coming to the boundary of large scale plantations: these places usually stick very close to forests, streams, or village places. Random use of chemicals would cause contamination to the air, water and soil included in the scope of residential areas. Meanwhile, boundary places occupied nearly 20-30% area of the whole plantation from which contributes a considerable production quantity of fruits. Therefore, a high-precision solution to control the dosage of pesticide spraying is highly demanded in this region. Dole adopted aviation crop protection with fixed-wing aircrafts and single-rotor helicopters to conduct pesticide spraying in a long period. But when they get to know the way agricultural drones work, they make their choice swiftly. After getting contact with several drone producers, they finally convinced by the capacity of smart and precision spraying which XAG drones showcased to them. Their business partners were assigned to work with Megadrone, XAG’s local partner in Ecuador to adopt drones for boundary spraying in their banana plantations.

Comparing to the traditional aerial spraying, agricultural drone carries a delicate technology to accurately control droplet size, flow rate and spray width. By powerful downdraft, micron-level droplets spread evenly on the surfaces of crop leaves, reducing chemical drifting to safely minimise contamination on the environment. This is the secret behind Dole’s decision to adopt XAG drones as one of the ideal agricultural machines in their field administration. 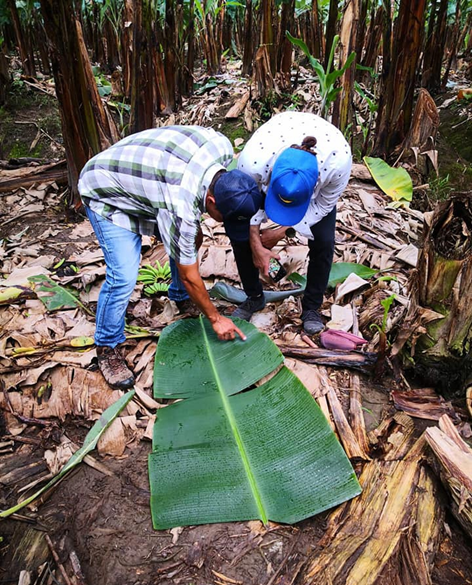 The Republic of Guatemala, located in Central America, is facing other difficulties when it comes to scaling up drone applications. Banana trees are densely grown in the plantation area, and they need weekly tending on pesticide, fungicide spraying. Agricultural service providers here can easily offer a fairly low price on aviation protection measures to local farmers in recent years.

However, this momentum built up a threshold when agricultural drones joined in the market. As the new entrant in this game, agricultural drone faced with two drag forces: farmers’ willingness to purchase the machine and the floor price of drone spraying services. The first issue was related to the lack of government subsidy and market education on new types of farming equipment.

The second problem linked with the local consumption habit in electing crop protection services. Most local farmers were accustomed to adopting crop protection services provided by agricultural business partners in most conditions rather than to purchase a machine for themselves. In banana cases, each one of the plantations has their preferred pesticide options, that would decide which kind of tools they are going to utilise in plantation spraying.

In Guatemala, the lowest crop spraying price is offered by tractor operators which costs $5-7/ha commonly, then comes to fixed-wing aircraft and single-rotor helicopter, which cost $6-10/ha and $12-17/ha respectively. Drone operation gains the highest price among all other measures and charges $16-26/ha, judging from difference in spraying dosage, the continuance of terrain and the land scale of operation. The situation here in some Latin American countries is totally different from many other places like China, Australia and Southeast Asia where drone spraying is more cost-effective than other aerial methods in crop protection. The price of drone service has been too high to scale up among local farmers in Guatemala, therefore an efficient mechanism must carry out to put down the price and persuade local planters to accept the offer.

In order to do that, Aerobots Inc., the global partner of XAG in Guatemala is working on a new form of business collaboration with local farmers. With specialised expertise in banana and sugarcane management, Aerobots has dived down deep in studying each kind of crops’ growth habit and now started to demonstrate drone-based crop protection services at lower costs or free of charge. “I don’t think the floor prices of drone services would drop to the level as affordable as other machines in a short period, we still have a long way to go. We’re now running our business in ‘non-commercial’ or ‘semi-commercial’ pattern, which means we’re doing strategic cooperation styled demonstration more often than actually selling services”, explained by Aerobots Inc CEO Jorge Jaar.

“We must show to them (farmers) how thoroughly we understand about the capacity of the products we’re selling, even the short boards of XAG drones. Seeing is believing, when they learn to know they can indeed gain significant effect by using our drones, even the price might set higher than their expectation, they’ll certainly accept the price we offer to them,” Jorge shows a positive attitude in expecting the future of local business.

Low price is not the only attraction to users forever, and it is the good result which impress them eventually. The way Aerobots serve for farmers has gained trusts from more local clients who eager to seek for better ways in improving their production mechanism.

Through open communication mechanism between service provider and farmers, the positive closed-loop is helping both sides in a sustainable manner: farmers benefit from customised crop protection project made by service supplier with profession, which impel them feel comfortable to share more first-hand field data . And customer feedbacks, Aerobots can go deeper in improving the analysis model to make more precise decision for clients. 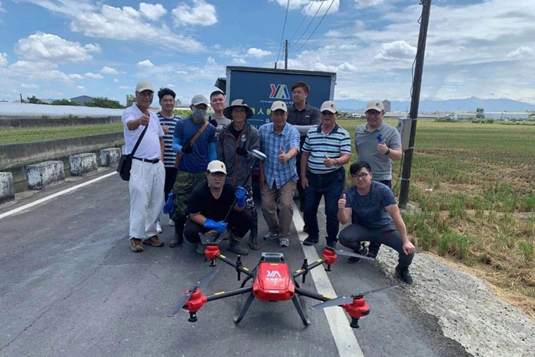 Meanwhile in Taiwan, China, a team of young drone pilots from the Yilan County is tackling a totally different problem in local banana plantation. The team leader, Lin Tzu Chin, is considering the solution to a long-term project: how to maintain the balance between safe operation and ultimate effect.

Banana plantations under the maintenance of Lin are unlike those in Latin America. In Yilan County, the fields spread relatively scattered with irregular shapes and small scales, sometimes mingled with many kinds of obstacles such as telephone pole, tall trees, or cabins. Operations above these areas could be very challenging for unskilful pilots. Also, local regulations hold strict and conservative attitude towards pesticide choices and agricultural machine utilisation. 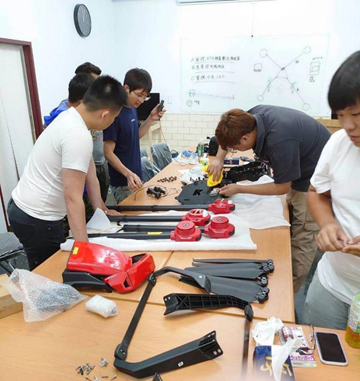 Therefore, Lin has designed a series of drone piloting tutorials best fit for farmers in his hometown after he received training courses from XAG Academy in mainland China. This has been building up trainers’ understanding of the specialisation of XAG agricultural drones, as well as empowering them with the ability to safely operate drones that can smoothly avoid obstacles. Lin has also customised his training curriculums based on the different crop applications in participants' area as well as their personalised needs.

“In most conditions, your clients would understand there might be some places in your spraying scope that pesticides can’t reach to. But you clearly understand if your spraying operation cannot cover certain area, the obstacles you avoided would be the blind spot from where diseases and pests are brought back, and those deadly negligence would destroy all effort you’ve done before. ” said Lin, “So we have to keep our jobs done perfectly especially when facing complicated terrains, because we would like to pursue the ultimate effect of our work and let our clients satisfied.”

Why High Value Crops Important to Us All?

A huge number of people living on this planet are surprisingly haunted by the shadow of an invisible threat: the hidden hunger. From a report made by International Food Policy Research Institute (IFPRI), 26% of the world population, over 2 billion people worldwide suffer from hidden hunger, and poor diet is one of the most common sources of this issue.

In Latin America and Caribbean region, people’s diet relies less on single staples, facilitated by measures like nutrition education and basic health services, the threats from hidden hunger correspondingly become weaker in these areas. Varied topography and rich biodiversity are mutual features in tropical and subtropical regions. Gifted by natural advantages, Latin America and Caribbean, East and Southeast Asia offered the largest proportion of business production in global agricultural transaction. Among which, products from economic crops with high value are the most representing case in the whole trading system.

High value specialty crops and its products are particularly significant to humankind. As an important part of the human diet, they provide most part of the nutrition, trace element and vitamin that human body needed in every day's life. However, compared to open field crops, they are more difficult to manage and persist highly demanding in targeted operations and sophisticated management to secure their production quality.

It is predictable that smart agtech would be the most anticipated measure to bridge the gap between crop applications of different countries, and to facilitate agricultural productivity reach to the unified level as much as possible. As a company which treat “Trace Perfection” as one of its core values, XAG will surely keep thinking about how to fit its products and service into the diversifying global requirements, especially in management of high value specialty crops like banana. 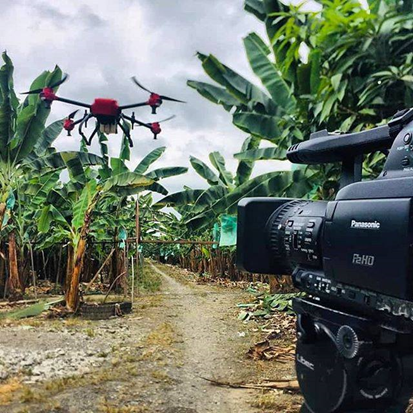