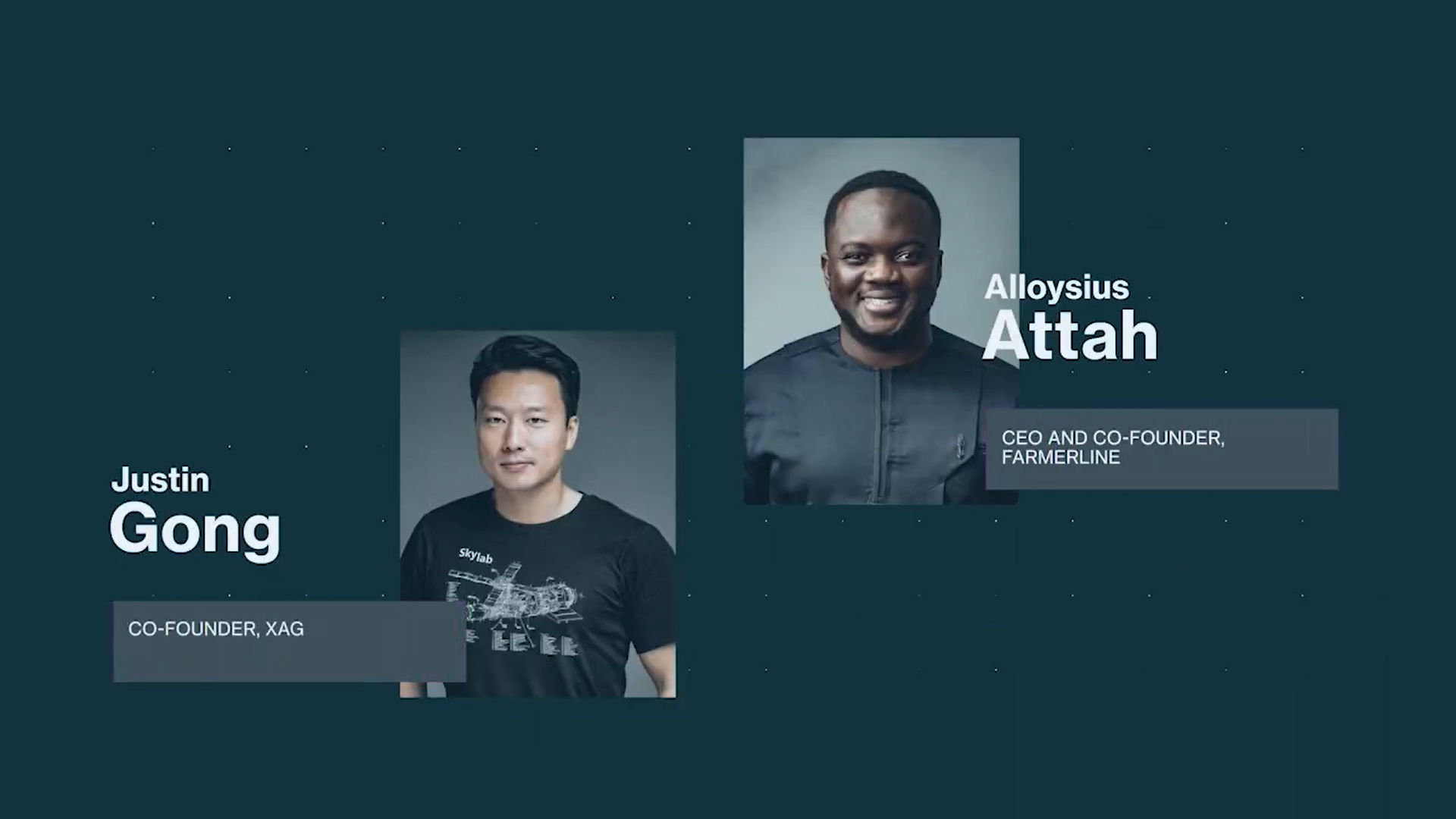 At the Bloomberg New Economy Catalyst event kicking off on June 30, Justin Gong, Co-founder of XAG was invited to share his work on deploying robots and AI in the developing world, with the aim to make smallholder farming more productive, competitive, and sustainable. The inaugural Catalyst cohort is composed of 31 leaders from 18 countries to discuss what’s next in the fields of climate, agriculture, bio-tech, e-commerce, space and digital money.

As Founder of Bloomberg L.P. Michael R. Bloomberg introduced in the opening remark, the Bloomberg New Economics Catalyst was founded in 2021 to showcase a new global leader community—across 6 continents—who are creating true impact at the cutting edge of technology and policy. Justin Gong, Co-founder of XAG was selected by the Bloomberg New Economy to be part of the Catalysts for leveraging agri-tech to transform the future of farming.

In the dialogue of Climate and Agriculture, Justin Gong and Farmerline CEO Alloysius Attah talked about the agricultural best practices to turn smallholder farmers into tech entrepreneurs. Following is the highlight about how these two catalysts are bringing to farms in smallholder economies. 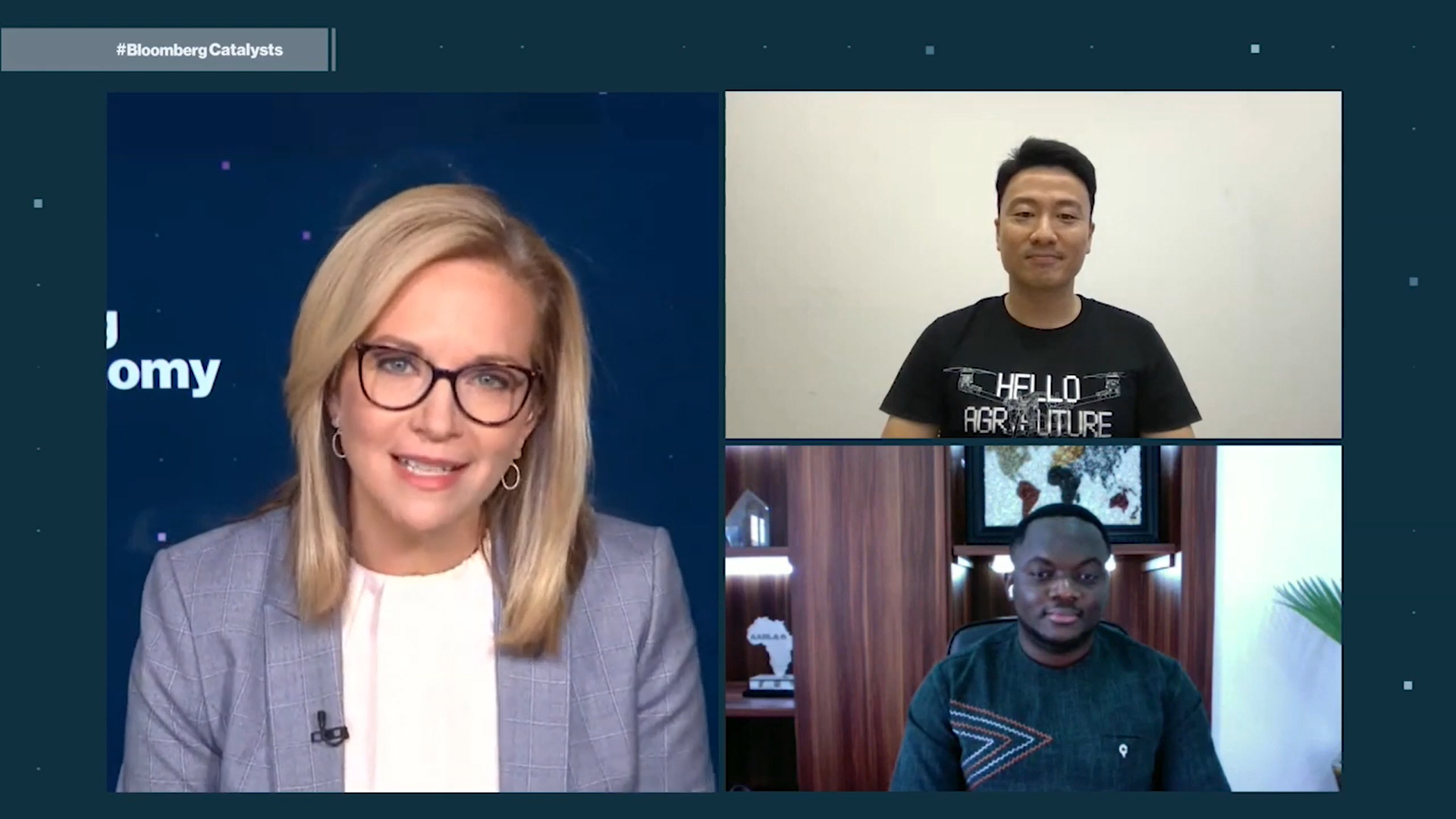 Q1: How did you get into the business in agri-tech? And what is the most exciting part of technology at this point?

Gong: About 7 years ago, our team visited the cotton farms in Northwest China and surprisingly saw farmers were holding the handheld devices to spray chemical. It came to us that technology could help farmers connect to the digital world and therefore we start to design drones and robots that are able to broadcast, spray crops, and spread fertilisers. Autonomous technology can also help protect the environment, reduce chemical use, and fill the urban-rural gaps.

In the future, connecting the farmland, farmers and the rural economy will be a paradigm shift that is comparable to the industrial revolution. Once you get all the farmers who are producing food into urbanisation and digitalisation, a huge power will release to drive the next growth for the global economy.

Attah: Our mission is to create lasting profits for farmers everywhere. Farmers in Africa are currently feeding one third of the global population and will feed the world’s 9 billion people by 2050, with prodigious consumption of fertilisers and seeds. Agritech can play a significant role in supporting farmers to feed the future. It can reduce cost of farming in general and enable governments and companies like Farmerline across the continent to provide information service to farmers via SMS and voice messages.

Q2: Are you able to have the impact that technology can deliver among the smallholder farmers?

Gong: Compared with other countries such as Australia and America, the sizes of Chinese farmlands are quite small where large agricultural machinery is not suited. Instead of directly selling farmer the devices, we trained lots of young people who went back to the countryside and became drone pilots and robot operators. They could deliver crop spraying services to smallholders, who could not afford but were able to benefit from drones and robots. In 2016, we set up XAG Academy to teach farmers on skills to operate our drones and embrace the concept of sustainable farming.

Attah: To help African smallholders maximise their production efficiency and crop yields, Farmerline has developed a mobile information network platform specialised in agriculture. It connects farmers with field agents and agricultural experts who can provide a wide range of agricultural information and training courses, such as weather forecast, market prices and new farming techniques.

Q3: What are the main barriers to scale up agri-tech in emerging markets?

Gong: Since the piece of farmland is the only income source farmers have, it was hard to make farmers trust your technology to spray pesticides. So, at the very beginning, we had to set up a drone service company. Then with the increasing product sales growth, another problem revealed in agricultural service supply chain, such as training and maintenance. To meet the needs of local users, XAG has built up a complete supply chain that integrates all the existing distributors, like chemical resellers and agricultural machinery dealers, to make sure they are on the same pace.

Attah: Language barrier is the major challenge in African countries. Thus, to gain the trust of smallholders there, we send out field officers to conduct weekly community-based workshops in local language to train farmers on improved farming practices and better business practices. All training sessions are reinforced with agronomic and business tips through digital mediums such as voice calls and talking books.

Q4: Do you see younger generation keen to stay in rural areas and get involved in a more technical-looking farming, or they still want to flow into cities?

Gong: Despite the development of urbanisation, I think young people tends to move back and farming will become a professional job. First, drones and robots would replace manpower for labour-intensive, tedious farm work, which means the individual young farmers can manage bigger farmlands and gain much higher income than the older farmers. The use of less chemical, less seeds, and less fertilisers also means the cost for farming is also reduced.

Q5: What do you think is the most significant change to dietary habits in China? A shift from protein-based dietary towards plant-based foods, or remaining high consumption of animal protein?

Gong: I can see both trends are happening in China. In the cities, people tend to live a healthier lifestyle, so they tend to eat more fruits and vegetables. But we do have 12 million people moving from rural area to cities every year, and they switch to higher-priced nutrients as their incomes increase. From our perspective, the applications of robots in the farmland are making the produce much better quality and higher quantity. At the beginning for the next decade, the consumption of animal protein will slightly increase, yet later on very soon people will get to into a more balanced diets.