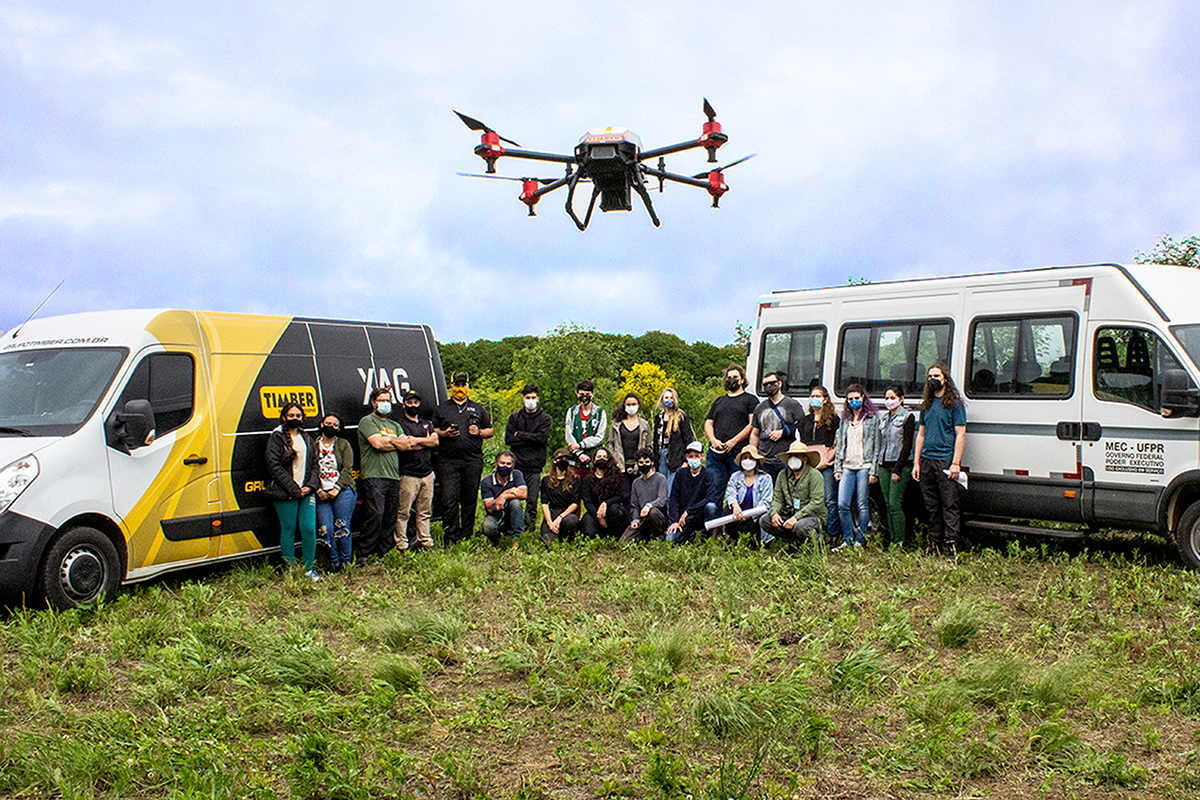 A forest restoration project using XAG Agricultural Drones has been initiated in Brazil, which is a pioneer in experimenting the scope of planting seeds of native tree species by drone. The trial will help demonstrate the effectiveness of drones to boost forest growth, paving the way for the autonomous technology to be used in large-scale planting of Brazilian forests.

This drone seeding application is part of the Arboreto Project, carried out by the Federal University of Paraná (UFPR), Brazil's oldest university, in collaboration with Timber, XAG's local partner and a supplier of autonomous agricultural machinery. It aims to help speed up the process of forest restoration through planting tree species with commercial interest and environmental adaptation.

Students from UFPR listening technical explanations from engineer of Timber.

During the field experiment, different amounts of seeds were weighed and sorted into the smart container onboard the drone. After the pilot entered all the operation parameters into the mobile APP, such as waypoints, flight speed, and spray volume, the XAG Agricultural Drone with a spreading attachment was planned to run along target lines, evenly distributing seeds from different forest species native to the region.

Compared to planting trees by manual labor, drone with full automation can improve the productivity of the restoration work, especially in terrains that are difficult to access. It is expected that agricultural drone can serve as a cost-effective tool to facilitate the replanting of native trees by governments and companies.

As a leading agri-tech company, XAG develops drones for various agricultural uses that have been introduced to 42 countries and regions. Its agricultural drones are widely used for sowing seeds, spreading fertilizers, spraying pesticides, and digital field mapping.

As deforestation has become a global crisis that can undermine the climate target and threaten food security, the autonomous farming drone could be explored for a new territory to make forest replanting easier and faster. Brazil, with the world's second largest forest area, is among one of the countries which pledged to end and reverse deforestation by 2030 at the COP26 climate summit.

Now with the seeds of hope planted, germination rate and tree growth per row will be carefully evaluated for this innovative project, in addition to understanding the most suitable seed mixture for drone application.

Taking advantage of the versatility of XAG's agricultural drone, UFPR also conducted another experiment with an eye on fertilization and pest control for plantations of commercial tree species. At UFPR's Experimental Farm near Rio Negro, the XAG drone automatically dispersed solid fertilizer and liquid pesticide into an area with 1.5-year-old slash pine planting.

"We know how difficult it is to carry out work like this one to plant native trees. So, when we can count on a technology that has control and that we can manage to define rigor, this is welcomed", concluded by Professor Alessandro Camargo Angelo.