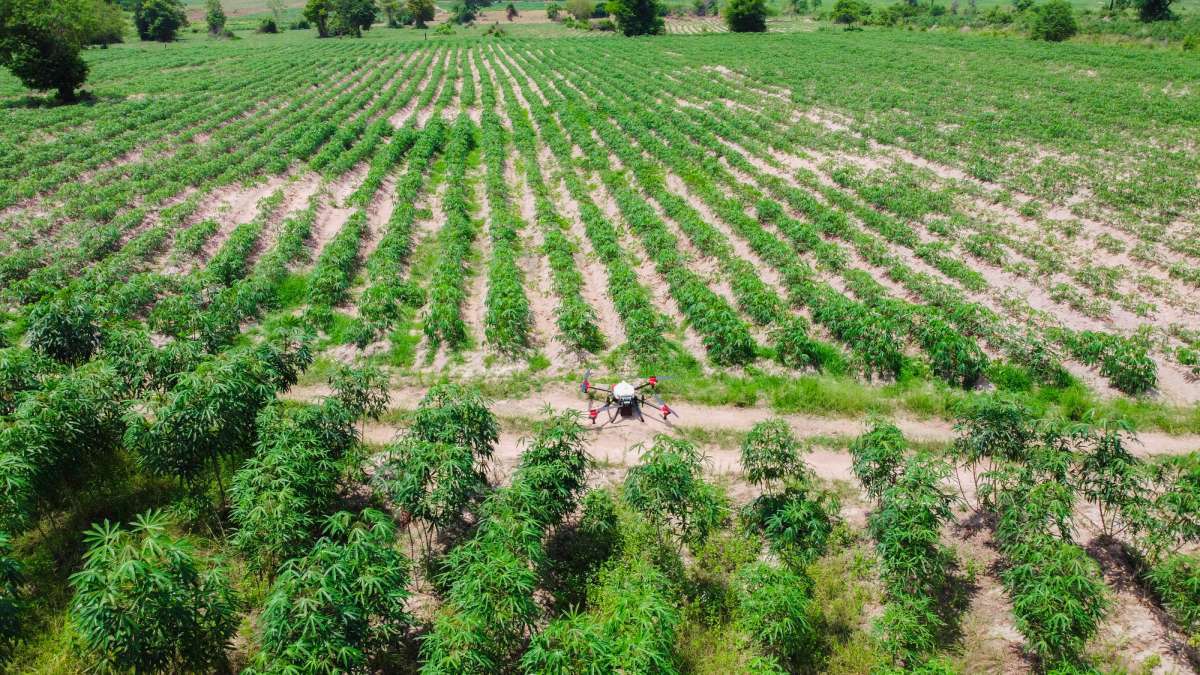 7 June 2022, Siem Reap, Cambodia – Drone technology has been recently introduced in Cambodia's cassava cultivations to help small-scale farmers earn better yield while bringing down the costs of farm input. Cassava is the most important agro-industrial crop in Cambodia that provides employment and livelihood to thousands of rural workers. Supporting the national cassava policy, XAG delivers new energy to this sector with its agricultural drones that can use less water and chemical and ease the workload on farm.

A big leap forward in productivity

Broadly grown on over 600 thousand hectares of farmland in Cambodia, Cassava covers the second largest planting area after the rice paddy and contributes to 4% of GDP growth. However, the tradition of cassava farming involves intensive labour and time-consuming process. To meet the growing demand of cassava-based products including food, flour, paper and alcohol, Cambodian farmers have rapidly expanded their planting areas and started applying XAG's agricultural drones for productivity boom.

Chhay Thi is an early adopter of spray drone who owns 20 hectares of land in Varin District, Siem Reap Province of Cambodia. This May, he ordered services from XAG local partner Red Sparrow Cambodia and had the XAG Agricultural Drone to demonstrate autonomous weeding on his 10-hectare cassava field. 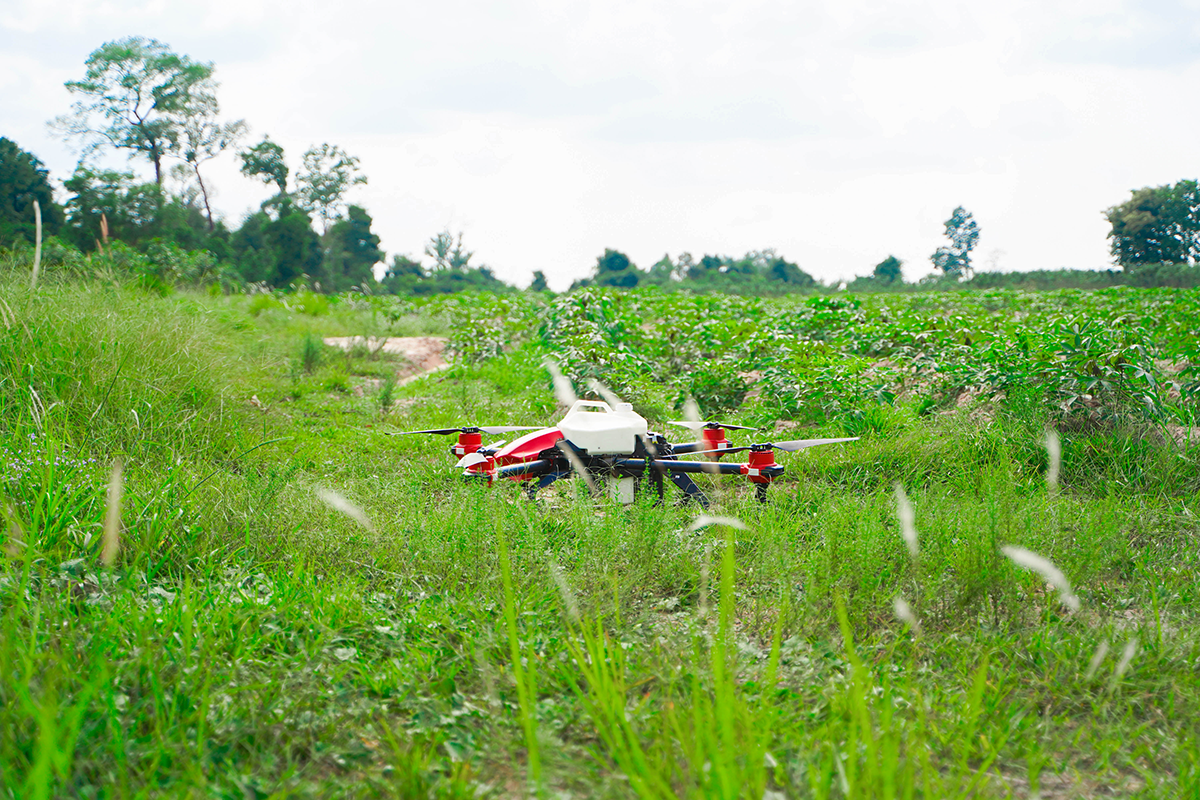 Unlike the large agricultural machinery, drones can be transported conveniently and deployed to the field much easier. After the liquid tank was filled with herbicide, the XAG agricultural drone automatically took off as the drone operator played simple clicks on mobile app.

The drone flew over ridges of cassava plants, sprayed precisely along the pre-set route, and finished 8 hectares of herbicide spraying via unmanned control. In the past, the same amount of work usually takes farm workers more than a week to complete manually, but now, it can be done within one hour by only one agricultural drone.

Despite the agriculture sector maintains an adequate workforce, farm owners are also faced with a rising cost up to $18-25 per hectare when they hire workers for pesticide spraying. A group of farm workers can only spray 1 hectare per day, which would struggle to catch up with the busy season of cassava growth.

Besides the increased efficiency, drones are helping farmers like Chhay Thi to reduce overall planting costs. "If I have an XAG drone in busy seasons to help me with crop protection, I can save $8-10 per hectare that is formerly spent on manual spraying. Drone operation also reduces the use of chemical by 10-30%, so the resources and money saved can be reallocated to the other crop cultivation," said Chhay Thi who witnessed the whole process of drone spraying demonstration. 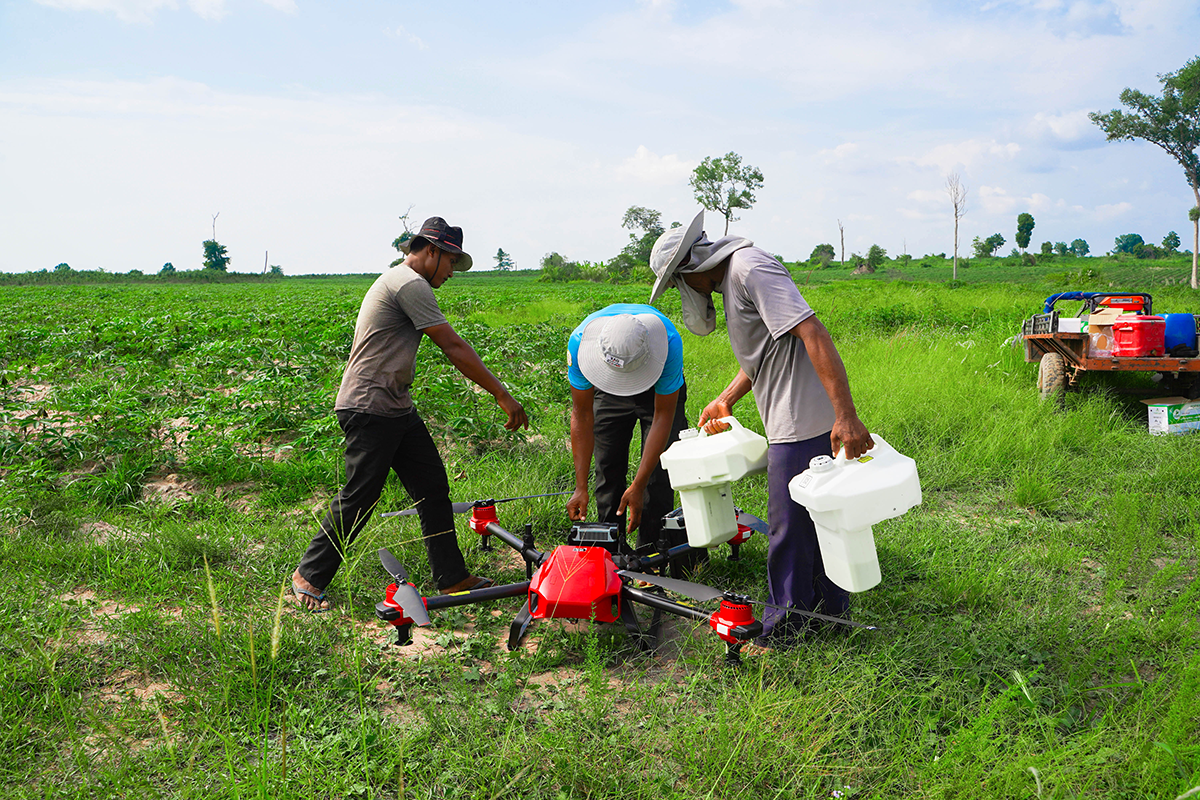 The agricultural drone has other benefits of closing the yield gap and protecting farmers from chemical exposure. The way drone sprays top down from the air successfully prevents direct contact of large ground machinery on cassava crops, ensuring that pesticides or fertilisers can penetrate the plants with precision and avoid crop damage.

Cassava crop can grow higher than one meter and sometimes even over the height of human, but traditional spraying requires farmers to either carry backpack sprayers or drive tractors to enter the field. Instead of putting farmers into ground operation, drones can eliminate the health risks of inhaling chemicals and getting poisoned.

An XAG drone demonstrated its capacity of spraying autonomously

In Chhay Thi's hometown, many villagers cultivate cassava as their main source of income. "I believe the high efficiency and affordable price will accelerate the scaleup of drone operation among more farmers. XAG's agricultural drone can not only help me reap more harvest, but also serve other farmers with the same demand for cassava boom," Chhay Thi said.

Drone technology has showed its various advantages on farm management, from improving crop yield, using less pesticides to safeguarding the well-being of rural workers. As Cambodia is the world's tenth largest producer of cassava with plans for steps forward, XAG anticipates having more cassava farmers to adopt agricultural drone and get better profit in a sustainable way.