February 28, GUANGZHOU - Since the emergence of new COVID-19 coronavirus outbreak in China, XAG has leveraged its world-leading agriculture technology and pledged 5-million-yuan special fund for epidemic containment. XPlanet drones and R80 robots have been deployed by XAG to disinfect affected areas in a series of demonstrations, which helps provide solutions for improving public hygiene and reducing the risk of virus transmission via contaminated surface contact.

According to XCloud, the only crop protection UAS cloud system authorised by Civil Aviation Administration of China, up to February 28, 2020, a total of 370 professional teams with over 2,600 XAG agricultural drones have voluntarily joined the disinfection operation, covering an area of 902 million square metres in China’s 20 provinces.

Intelligence and Automation to Fight Against COVID-19

While global scientists are devoted to accelerating diagnostics, vaccines and therapeutics of this highly contagious virus, automation technologies also contribute at the frontline. For example, drones and robots are replacing hand sprayers to release disinfectant in public places. Infected zones, densely populated areas, epidemic prevention vehicles and waste collection points are the main targets that require site-specific disinfection to kill the virus.

Based on advanced technologies such as robotic control, automated driving and high-precision operation, XAG’s agricultural drone and robot can be easily adapted to address the urgent need for fast, accurate disinfection. Compared with manual spraying, these intelligent devices can protect operators from unnecessary exposure to virus and disinfectants. They can automatically disinfect a wider region safer, as well as targeting a specific area to embark on spot spraying and deep clean. 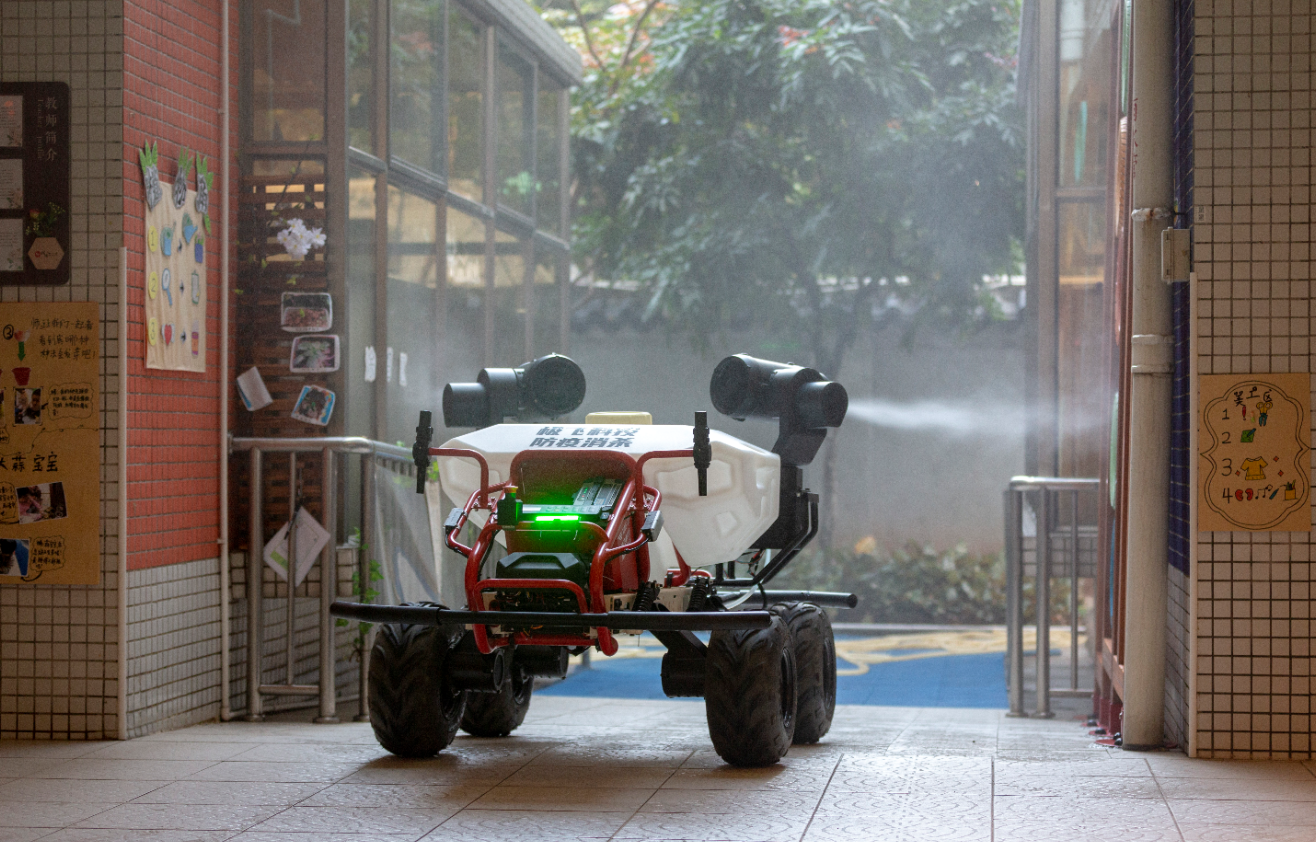 Instead of operating independently, drone and robot can combine together to reap the benefits of ground air disinfection against novel coronavirus. Covering a much wider area from the air with variable flying speed, one XAG drone in a day can disinfect 600,000-700,000 square metres to maximum, a task would normally take 100 workers to complete. Also, with the ability to precisely control output, it consumes one fifth less disinfectant than traditional approach such as handheld spraying.

However, drone has its limitations, unable to handle complex environment with high-rise blocks or corridors where small robots can easily fit in. XAG has launched the R80 agricultural utility vehicle for precision crop spraying, monitoring and transportation. Though originally designed as a farm robot, R80 can also be applied in various scenarios such as disinfection, using its 360° high-speed intelligent JetSprayer. With an 80 litres capacity and centimetre-level navigation system, such nimble unmanned device can traverse narrow spaces, automatically avoid obstacles and disinfect targeted areas from different angles, without dead ends. 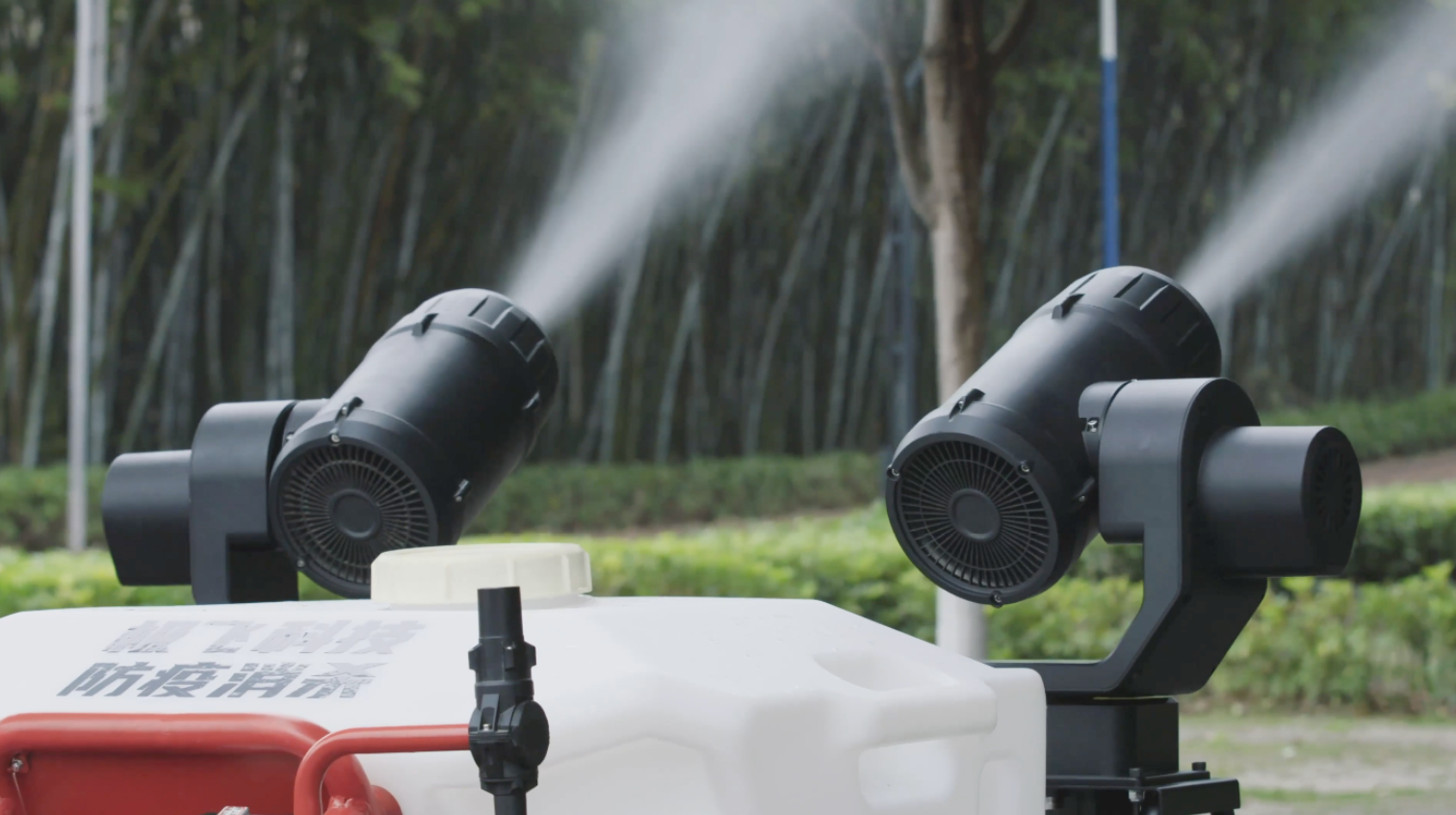 After rounds of research and field testing, XAG has been collaborating with government to carry out a series of ground air disinfecting demonstration at potentially coronavirus-hit areas, such as hospitals, industrial parks and schools. According to the standard operation procedure for aerial and terrestrial disinfection, high concentrated disinfectants are more effective on drone and robot spraying. When flung out from the drone nozzles or projected by the robot jet sprayers, disinfectant would be diluted with moisture in the air over time until it falls on the surface to create a virus-free environment.

Drones can follow police forces and medical staff on duty to disinfect epidemic prevention vehicles moving between affected and unaffected areas. For example, on February 5, XAG worked with Tianhe Public Security Bureau in Guangzhou, China on testing of high-accuracy disinfection for police car. Simply marking out the boundary of the parking zone as well as the position of the vehicle on a high-definition map via mobile app, the operator remotely directed the drone to take off. The drone then automatically flied to the designated area, hovered over the car and sprayed disinfectant 3-5 metres above the roof. Result shows that 99.8% of the car surface area was covered in disinfectant agent. 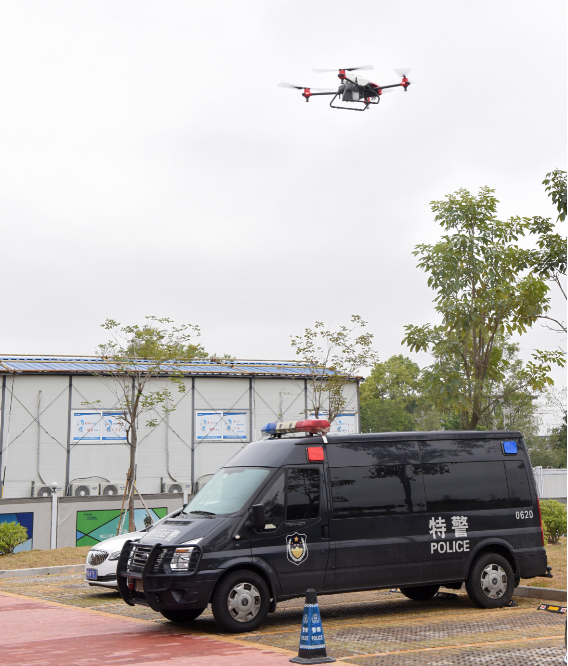 At the Third Affiliated Hospital of Sun Yat-sen University (Lingnan Hospital), the first-ever ground air disinfection exercise took place a week later to empower frontline medical staff. XAG introduced its R80 robot, in collaboration with drones, to disinfect ambulance, quarantine area, and crowded passages. R80 could atomise the disinfectants into micron particles as small as 50μm, and spray as wide as 12 metres, which enabled better adherence and therefore improved the effect of disinfectants on hospital surfaces. 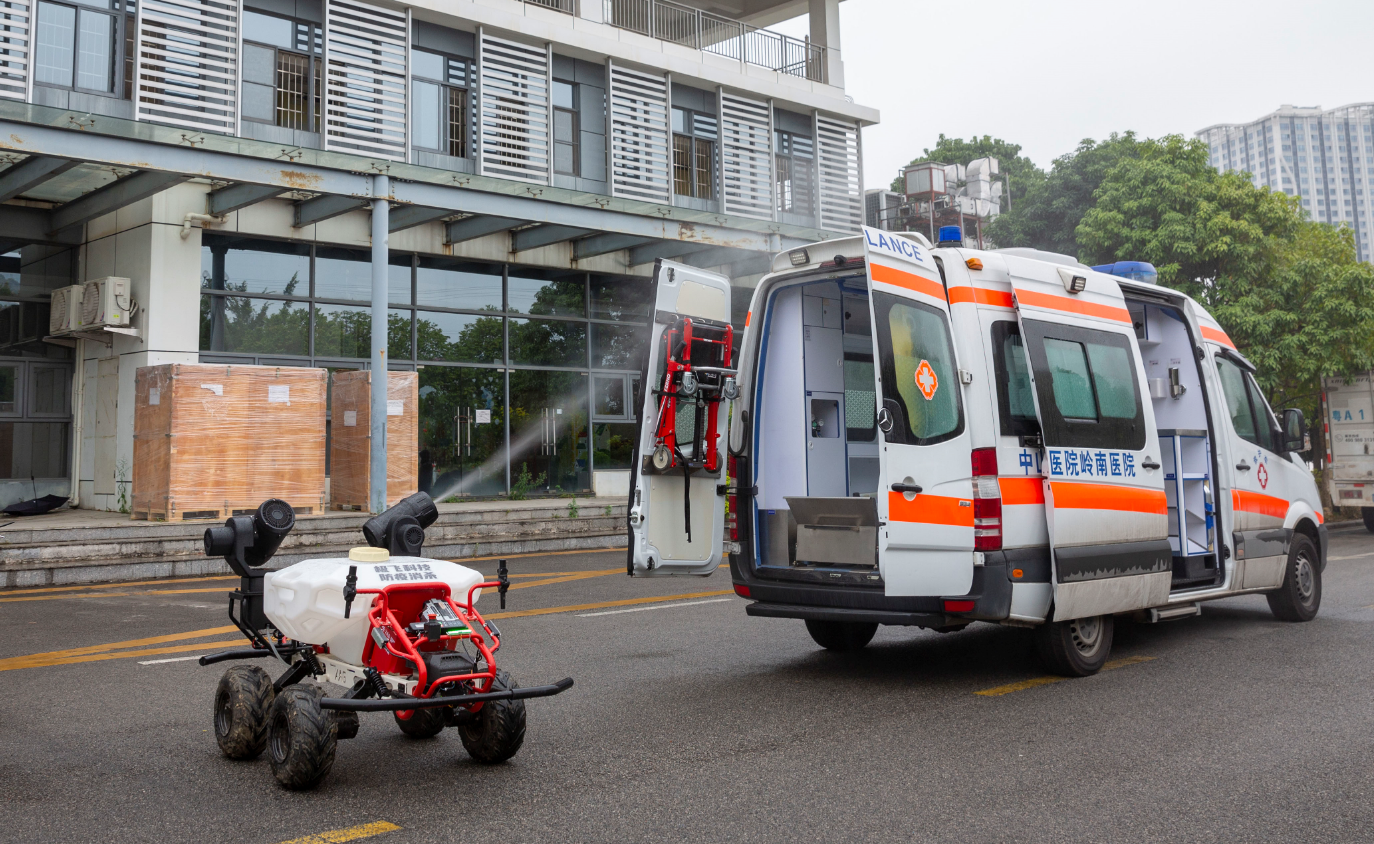 Schools are also among one of the critical scenarios that might have a higher risk of coronavirus infection once the students return. With the help of local Emergency Management Bureau, XAG has conducted another disinfection demonstration using unmanned devices at Guangzhou LieDe Kindergarten on February 12. The R80 robot precisely executed the self-driving route that was pre-programmed on smartphone. First activated at the school gate and passing through playgrounds, halls and other public areas unobstructed, it constantly switched the directions of JetSprayer to implement three-dimensional disinfecting even on blind spots. Meantime, the drone was operating in open spaces to cover a wider outdoor area, including the garden and rooftop playground. 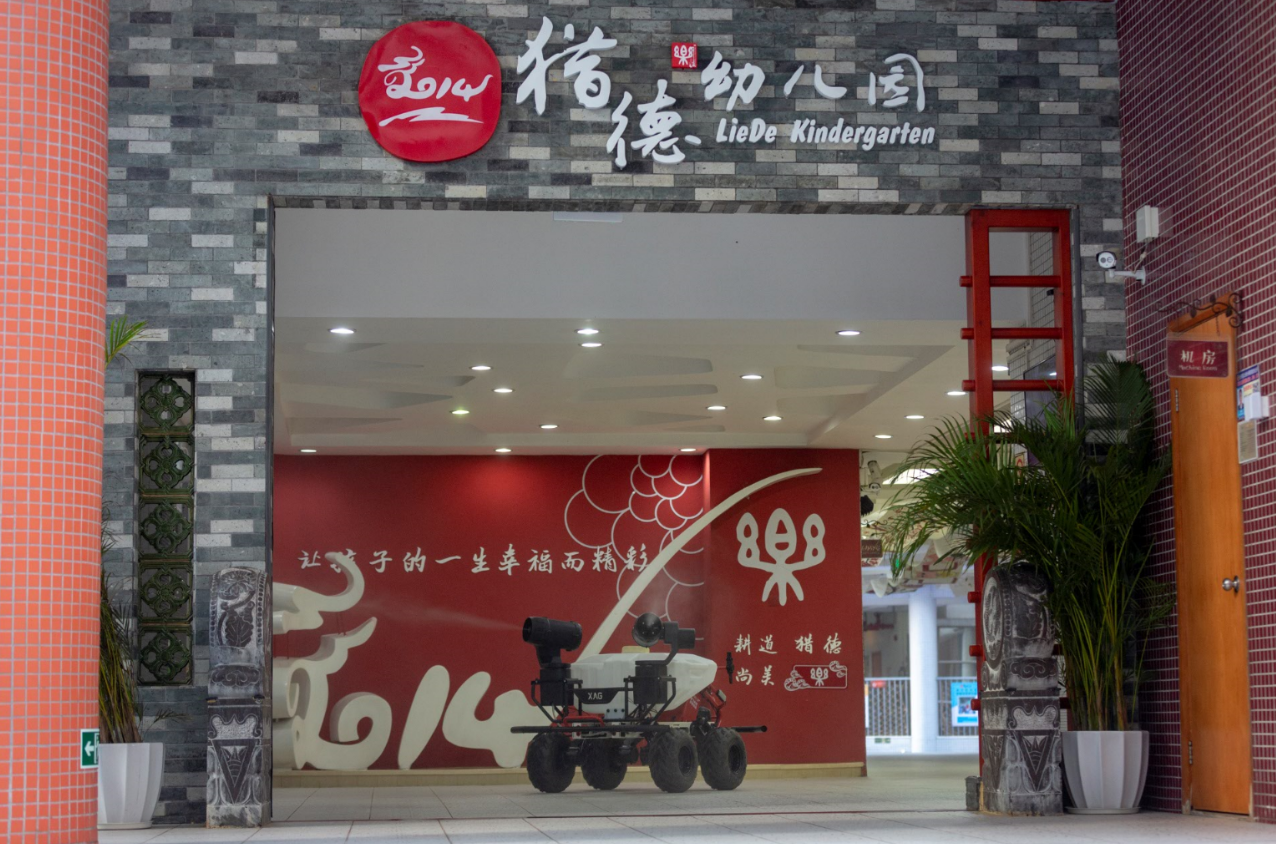 In such places where lorry cannot access, the previous solution was to hire 4 to 5 workers to disinfect the entire kindergarten, which took hours to complete. But now with drones and robots working in synergy, disinfecting a total area of 7,836 square metres was done in only 5 minutes.

The new coronavirus, officially named COVID-19, was first reported in Wuhan, China in late December 2019 and has now escalated as a global threat, with 50 countries worldwide reporting 83,310 confirmed cases and 2,858 deaths so far. At such critical stage, high tech companies should step out with their innovative solutions to address public fear and protect emergence responders at large.