Most crops and flowering plants rely on bee pollination to grow and reproduce. Bees, the tiny miracle workers with over 20,000 distinct species [1], create substantial economic and environmental values that are far beyond our expectation. However, the bee colony has been subject to a destructive blow at the 21st century. Decline in bee population and extinction of some bee species, attributed to neglect and reckless human activities, have caused a pollination crisis that might push the global food supply chain and ecosystem biodiversity into the brink of collapse.

As a leading agri-tech company, XAG has been trying to develop intelligent agriculture solutions to remedy the pollination demand gap and save the bee colony. In Australia, XAG collaborates with South Australian Agriculture Research Centre to incorporate drone technology into the almond pollination process, a bold and successful attempt to achieve cross-pollination while increasing almond production. In China, XAG and its operation team have used drones to pollinate fragrant pear trees, which proves to curb fungal disease and improve fruit yields through even, precise spraying. 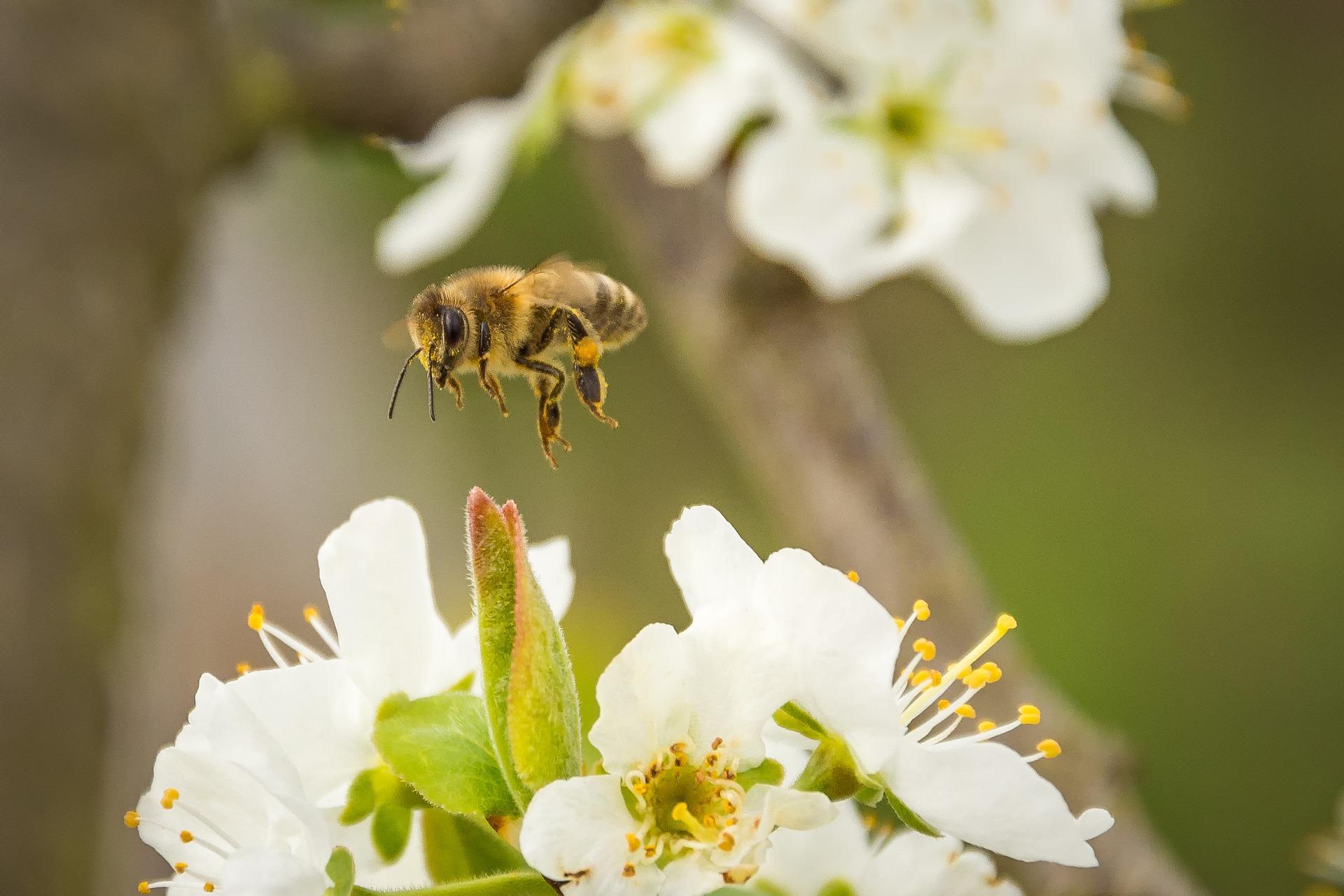 Although the exact level of bee losses on a global basis is still unclear because of the inadequate monitoring system, the bee colony does experience a horrifying death rate across different countries. For instance, population of managed honeybees decreased by 25% in Europe over the past 20 years and 59% in North America over 50 years [2], whilst many bumble bee species have shown an estimated 50% decline [3]. This might be associated with Colony Collapse Disorder (CCD), a mysterious phenomenon in which worker bees disappear unexpectedly, leaving a malfunctioning hive eventually unable to survive.

The complex causes of bee loss have not yet been deciphered among scientists, but many studies have pointed to multiple interacting stressors including pesticide exposure, contagious diseases brought by parasites and pathogens, erratic weather patterns due to climate change and inadequate floral resources due to habitat loss [4]. Most of these factors are associated with modern intensive agriculture, the main perpetrator. 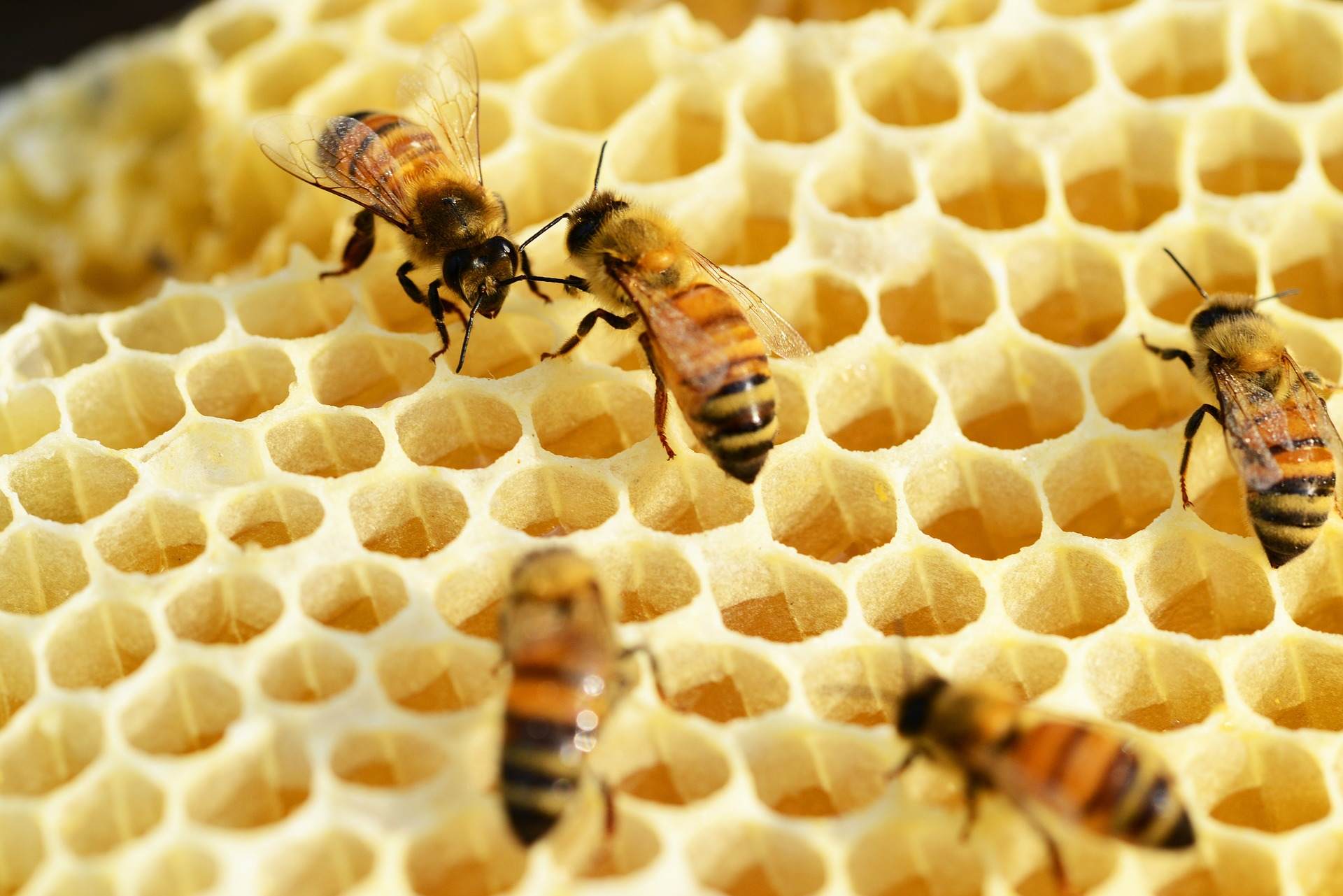 Decline of bees undoubtedly results in biodiversity loss, but it also directly poses threats to world food supply. According to a widely acknowledged study on the Royal Society Journal, bees and other pollinators contribute to the growth of 75% of the global leading crop species and 90% of wild flowering plants while pollination-dependent crops account for 35% of the global crop production [5]. In addition, demand for pollination-dependent crops has approximately tripled over the past five decades. Since most crop-dependent crops, such as fruits, vegetables and nuts, contain micronutrients (e.g., vitamins and minerals) necessary for human diets, decline of bee pollination service would also affect nutritional security [6].

A world without bees is unimaginable. If urgent actions have not been taken to reverse the trend, pollination crisis would strike with grave consequences, ranging from falling crop yields, food market disruption to the outbreaks of health issues related to micronutrient deficiencies.

Protecting the bee colony is a complicated, multilateral project that lies in building an ecological agriculture system. XAG has been playing a part in this long-term battle. Through combining drone, AI and IoT technology, XAG has provided farmers with plant protection services that minimise the use of pesticides and avoid pesticide drift.

Besides, XAG has initiated a series of experiments and applications on using drones to pollinate different cash crops. Pollens are first collected and blended with a special solvent to produce pollen liquid, which would then be uniformly sprayed over the fruit trees by drones. Particularly, XAG P Series Plant Protection UAS can transform the pollen liquid into micron-level atomised droplets, and the intense downdraft from the drone propellers can significantly reduce drifting. This ensures that the pollen liquid is precisely sprayed into the flowers to increase pollination rate. 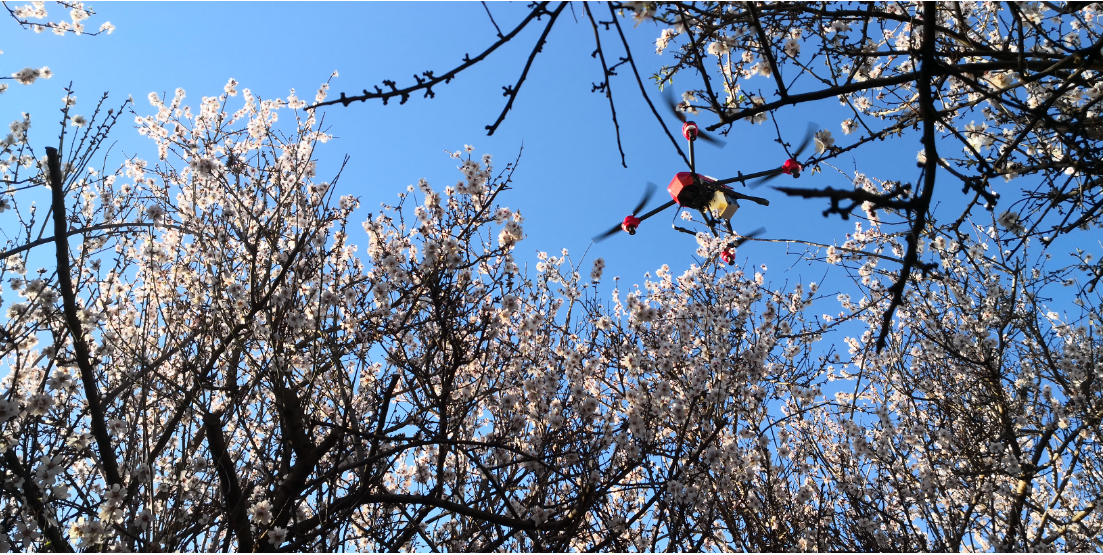 Case 1: Cooperation between Drones and Bees to Achieve Almond Cross-Pollination

Australia is the second largest almond exporter, boasting an export volume of $429 million during 2017-2018. Almond trees [7], a cash crop with very high economic value, are not self-fertile and nearly 100% rely on bees to render cross-pollination, therefore their fruit set and yield are greatly impacted by the falling pollination rate resulted from bee loss.

Take Nonpareil, the most popular almond variety, as an example. To achieve cross-pollination, plantings of Nonpareil must include other almond varieties to serve as pollinizers. This means that when planting two to three rows of Nonpareil, the next one to two rows should be exclusively planted with the pollinizer trees, so that bees can collect and transfer pollens between different almond varieties. However, under such circumstance, natural pollination is ineffective, and the health of bees is compromised. 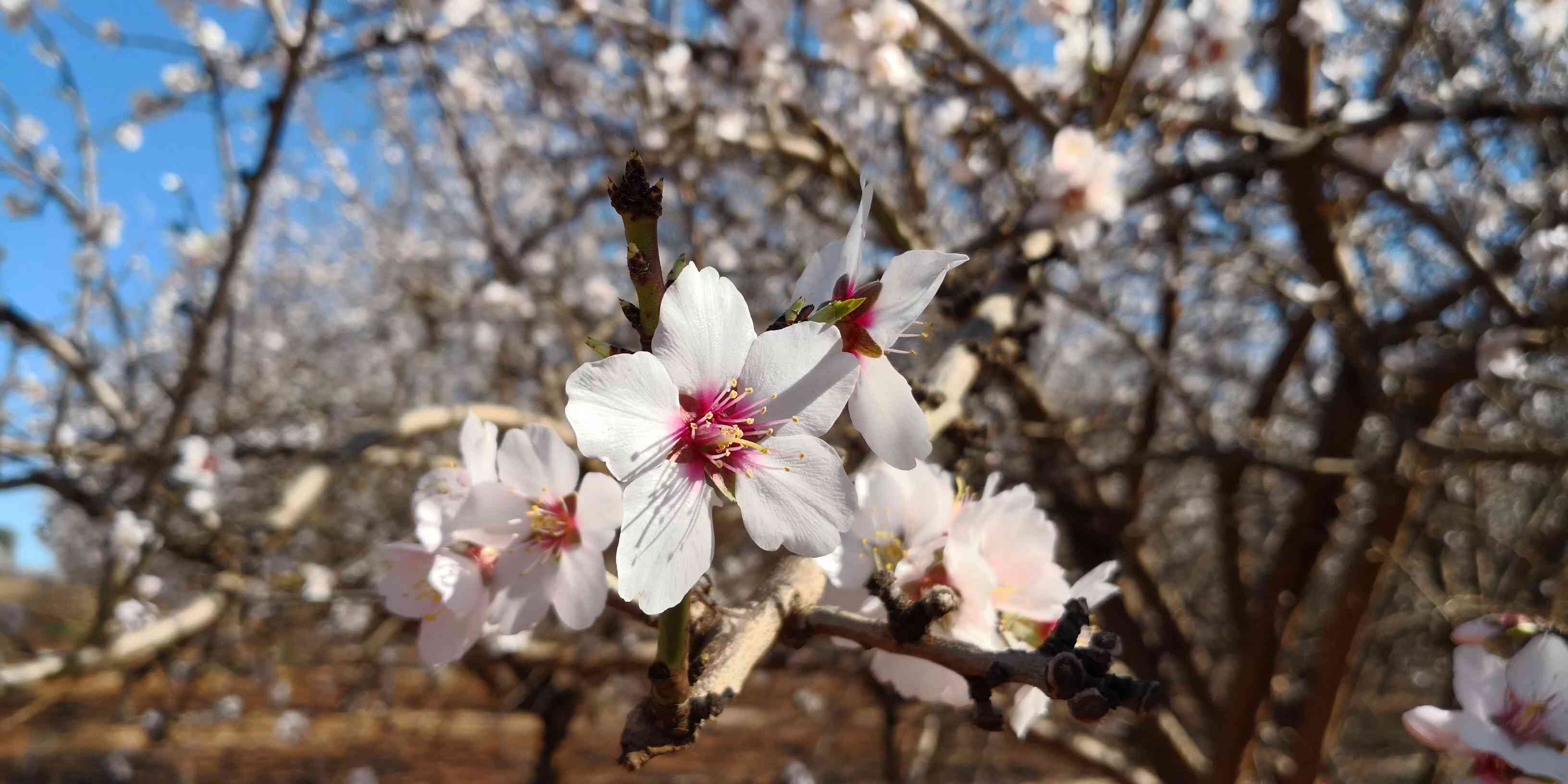 Almond blossom in need of pollination

First, the pollination behaviour of bees is uncontrollable in the mixed planting area. Instead of evenly transferring pollens in the Nonpareil area, some worker bees may immediately return to the hives after collecting sufficient pollens in the pollinizer area. Secondly, almond trees generally bloom in early spring when frequent rains and cold waves cause difficulties for bees to harvest. Thirdly, beehives are transported from a long distance to the almond orchards located in relatively remote desert areas with excessive wind speed. Such management practice as well as environment is likely to impair bees’ immunity and cause CCD.

Aimed at developing a new pollination method to protect the bee colony and resolve the lack of pollination service, Mickey Wang from South Australian Agricultural Research Center has led his research team to conduct a series of comparative experiments using XAG P Series Plant Protection UAS. In the experiment involved drones, after the bees collected almond pollens from the pollinizer varieties, the team used drones to evenly spray pollen liquid to pollinate the main almond variety. 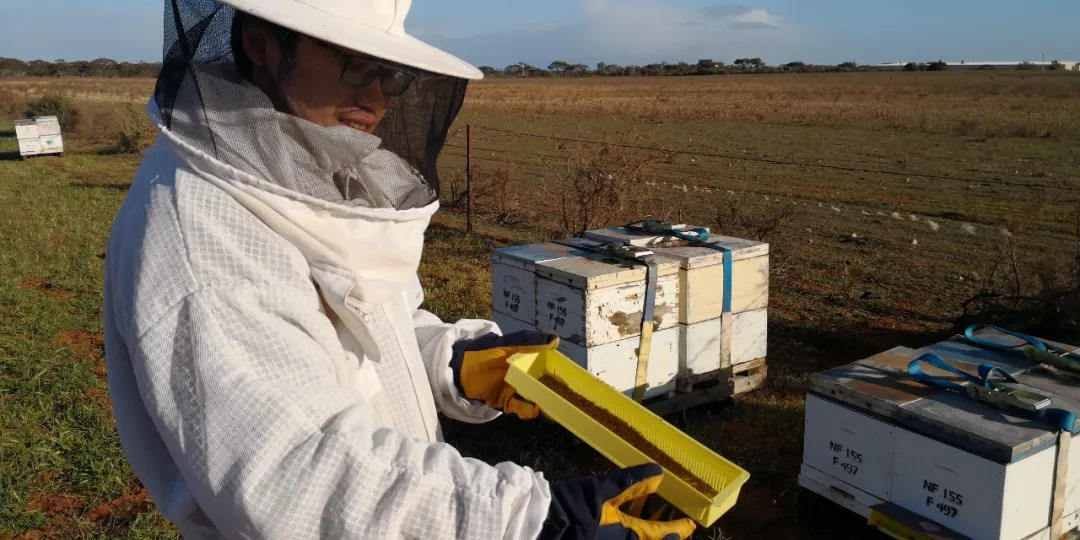 According to the previous experiment result, drone pollination has increased almond yields by 15% compared to counting on bees alone. The Thurla Farm in Victoria and the Clark Taylor Farm in the Riverside Area of Nanao later collaborated with XAG to conduct large-scale pollination over 250 hectares of almond trees using the P Series UAS, which helped to improve efficiency of cross-pollination while reducing the costs.

When drones serve as “electronic bees”, different varieties of almond trees could be intensively planted in separate areas instead of mixed planting. On one hand, the bees could concentrate on collecting as much pollens as possible in the pollinizer area to replenish food resources and maintain their protein level. Meanwhile, the pollination process is replaced by drones, minimizing the impacts of weather and making large-scale artificial pollination viable.

Korla fragrant pear is one of the most characteristic pollination-dependent cash crops in Xinjiang Uygur Autonomous Region, China. Improving the production volume of high-quality fragrant pears, however, has become a big challenge in recent years. Previously, the annual demand for bee colonies to pollinate Korla pears reached 150,000, whereas the actual number of participations was only less than 35,000. The spread of canker disease and pesticide misuse have further exacerbated the decline of bee population.

In order to protect the bee colony and curb contagious plant diseases, the local government has banned bee pollination over fragrant pears and therefore fruit growers can only resort to hand pollination. As the least effective and most labour-intensive approach, hand pollination usually involves the use of paintbrushes to transfer pollens to the pistil of each flower. Particularly in short blooming period, an overwhelming amount of physical work is required to support a tremendous peak in pollination, substantially increasing the labour costs. 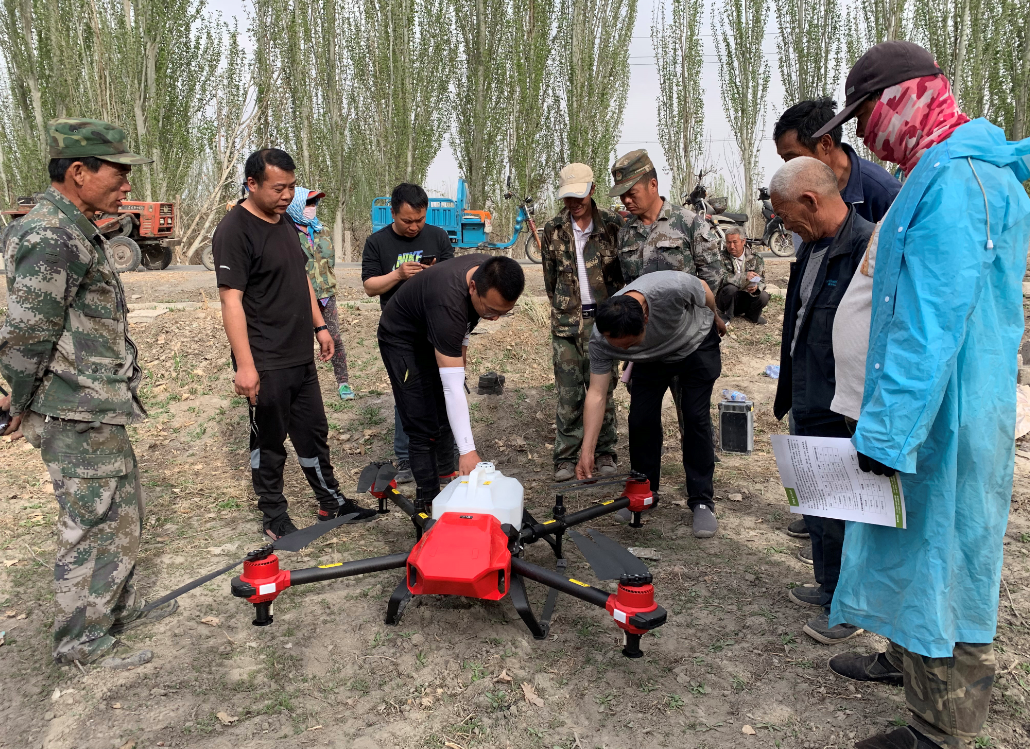 This April, XAG has participated in a large-scale drone pollination over 1,300 hectares of pear orchards located in Bazhou, Xinjiang. XAG P Series Plant Protection UAS was used to spray the atomised pollen liquid precisely into every pear blossom. The specialised pollen liquid was formulated by Korla Fragrant Pear Research Centre with a nutrient solution (e.g., includes elements such as calcium and boron) that could extend the blossom period and increase pear pollination rate.

Based on the operation results, each worker can only pollinate approximately 0.1 hectares of pear trees by hand every day, whereas its labour cost reaches 2,700 RMB per hectare. And the traditional hand sprayer is unable to achieve uniform spraying, resulting in unacceptably low fruit set. Instead, drone pollination can reach an efficiency of 13 hectares per set every day, 100 times faster than manual labour, and it only costs 375 RMB per hectare. The application of drones also proves to guarantee a relatively high pollination rate without inducing crop diseases, which greatly reduces the use of pesticides and improves the quantity and quality of fragrant pears. 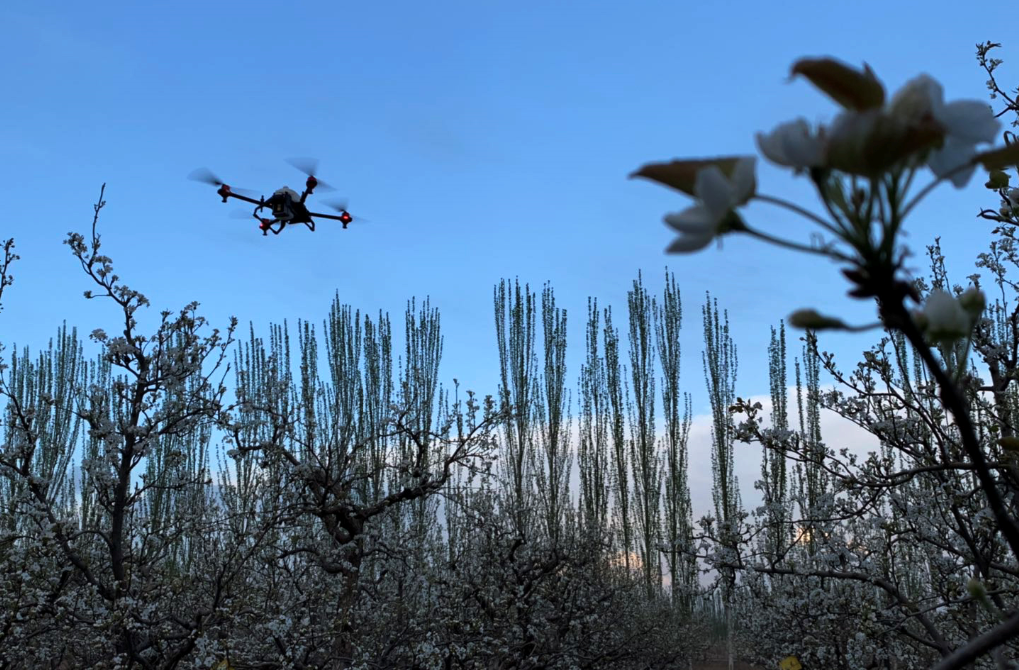 Drone technology is transforming the traditional animal pollination approach. It may be a successful attempt to reduce stress on bees while relieving the pollination crisis and sustaining a stable crop production to feed the world’s rising population. However, it should be acknowledged that pollinating drones cannot replace bees, since bee pollination is a natural mechanism too complex for drones to fully imitate. All parties around the globe should develop practical initiatives and take urgent actions to restore a vibrant bee community. 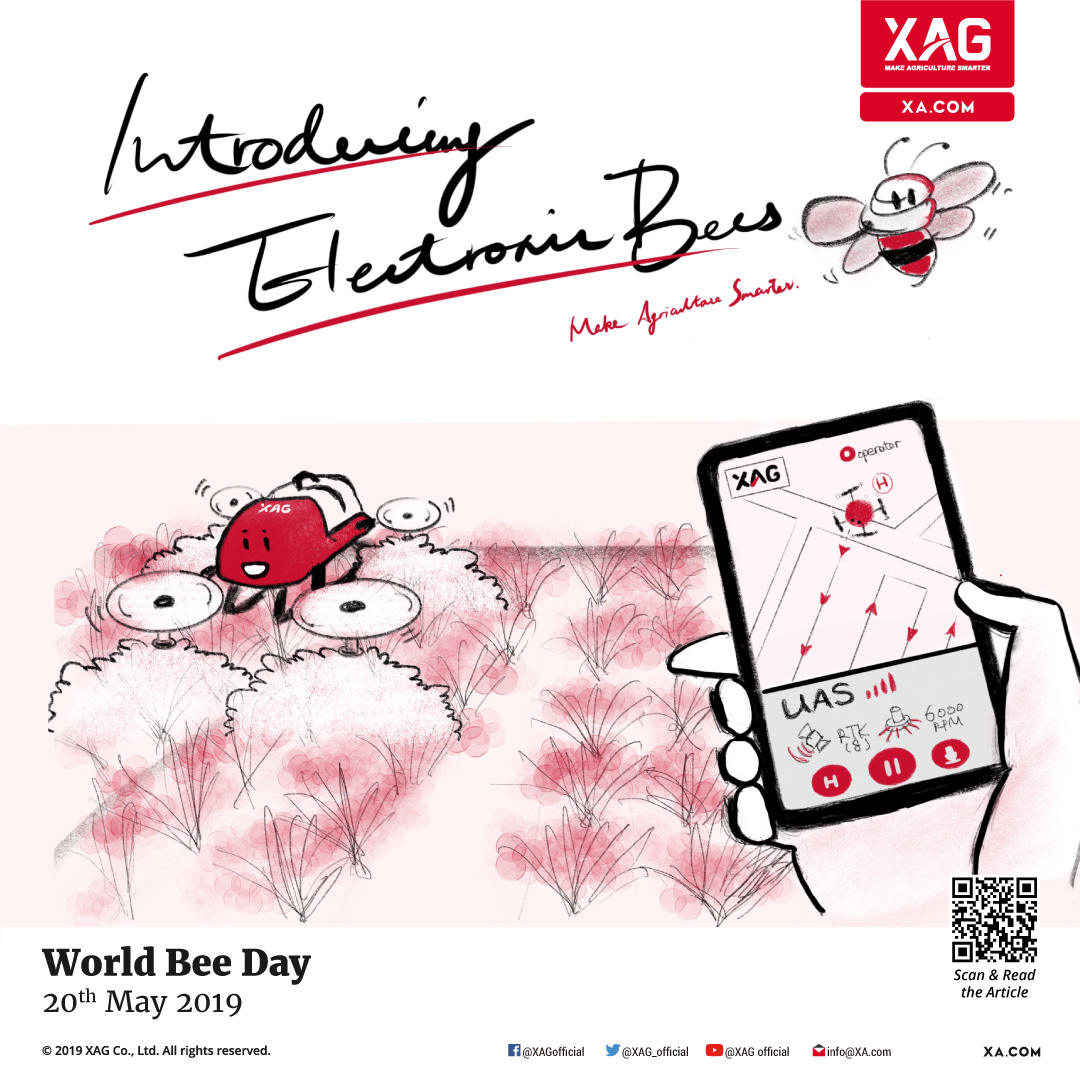