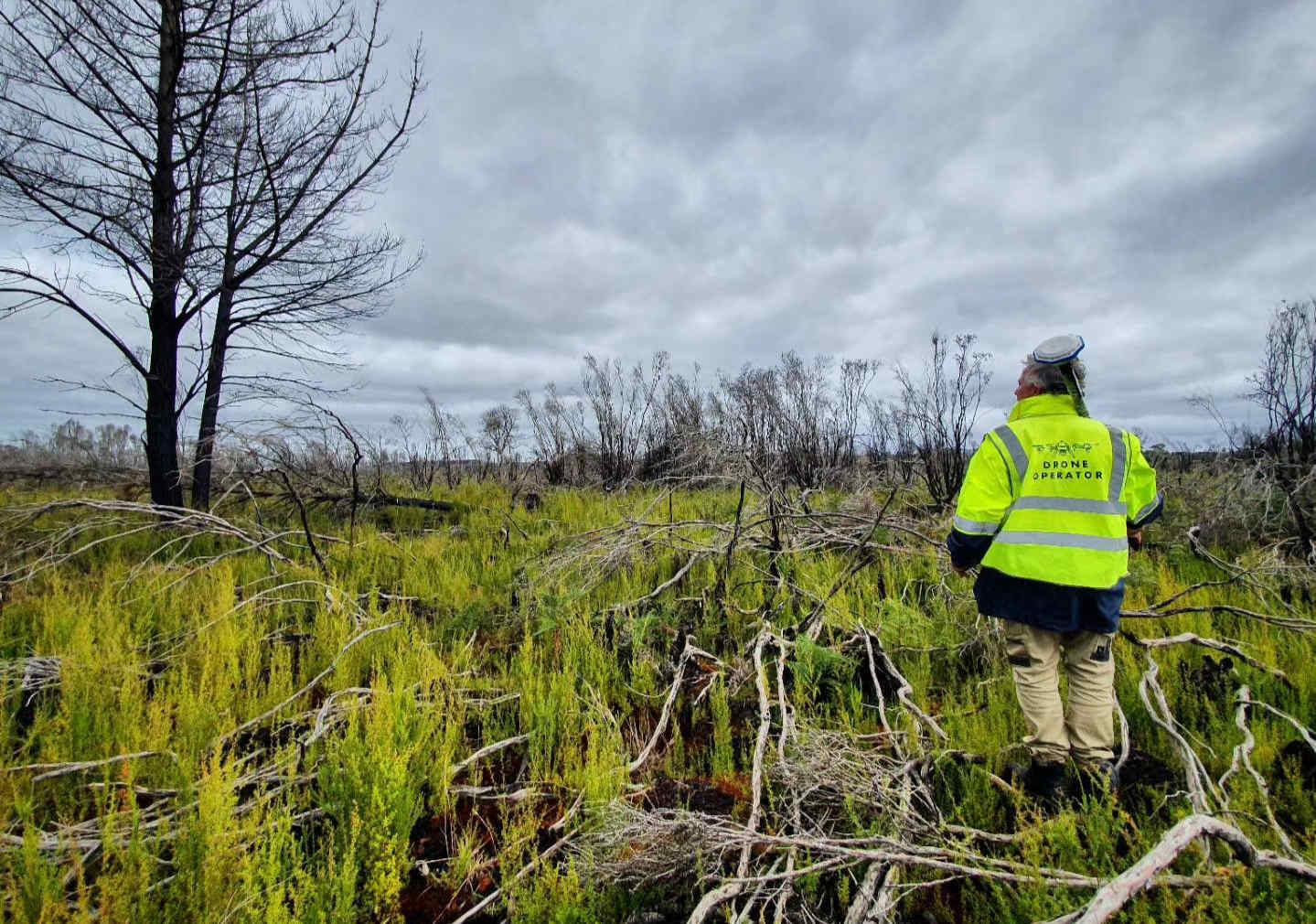 • Drones with intelligent spreading system were used to distribute seeds directly into the fire-ravaged, difficult-to-access areas.

• The trial project in Lake Cobrico demonstrates the best practice of drones to regenerate peat swamps after a wildfire in a safe, cost-effective manner.

AUSTRALIA, 12 May 2020 – In a collective effort to restore Australia from wildfire devastation, XAG has joined the first-ever post-fire drone seeding operation on Lake Cobrico, Victoria. This project was funded by Department of Environment, Land, Water and Planning (DELWP) and managed by Heytesbury District Landcare Network (HDLN). It is the first time that agricultural drones are used to re-establish native vegetation within a fire-ravaged peat swamp in Australia. 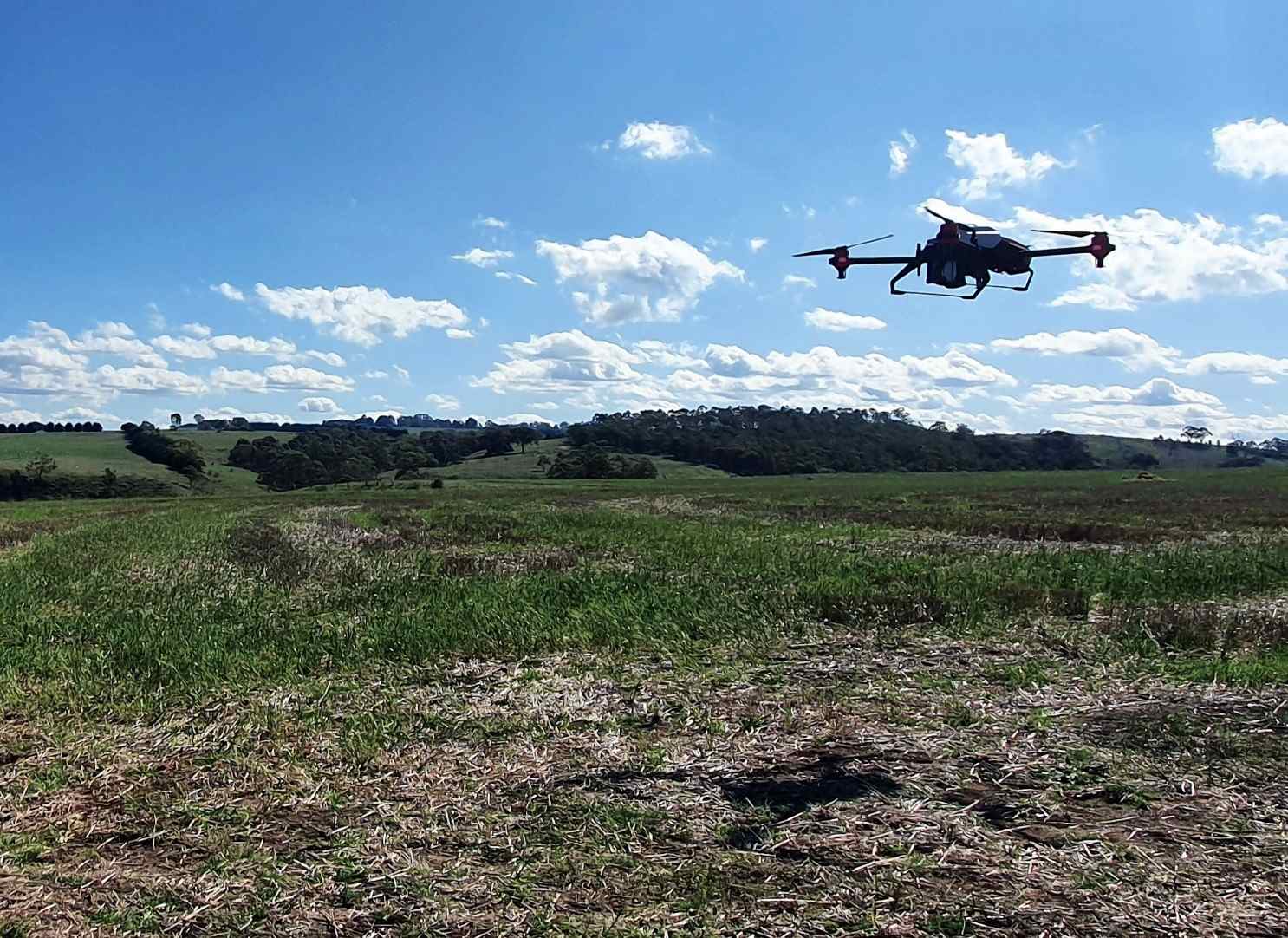 Due to the increasingly frequent, large-scale bushfire, Australia has been facing an unprecedented decline in biodiversity as well as substantial increase in greenhouse gas emission. Particularly, as one of the world’s largest terrestrial carbon reserve, peatlands have been experiencing drainage and fires, which contributes to 5% of global carbon emission. Immediate actions should be taken based on partnership to restore the country’s damaged ecosystem.

This April, XAG sent 3 sets of its P Series drones, equipped with JetSeed granule spreading system, to distribute native seeds directly on Lake Cobrico. Within only two days, approximately 40 hectares of burned land was replenished with new plants, using a blend of 12 different seeds. In the next six months, XAG and HDLN will closely monitor the result of drone seeding, which will be compared with that of the other area where plants are going to be natural regrowth. It is expected that the project would be replicated across the region and state, especially within the areas where traditional techniques are inapplicable.

Lake Cobrico is a swamp wildlife reserve located near Warrnambool in Southwest Victoria. Part of the peatland was severely damaged during the 2018 St Patrick’s Day Fire, with the vegetation and deeper soil layers left in ruins. In areas of high burn severity, the ecosystem itself might be unable to regenerate naturally and requires human intervention, such as direct seeding, for fire recovery. Re-establishment of native vegetation can slow down erosion and sedimentation, and suppress invasive weeds after a wildfire. 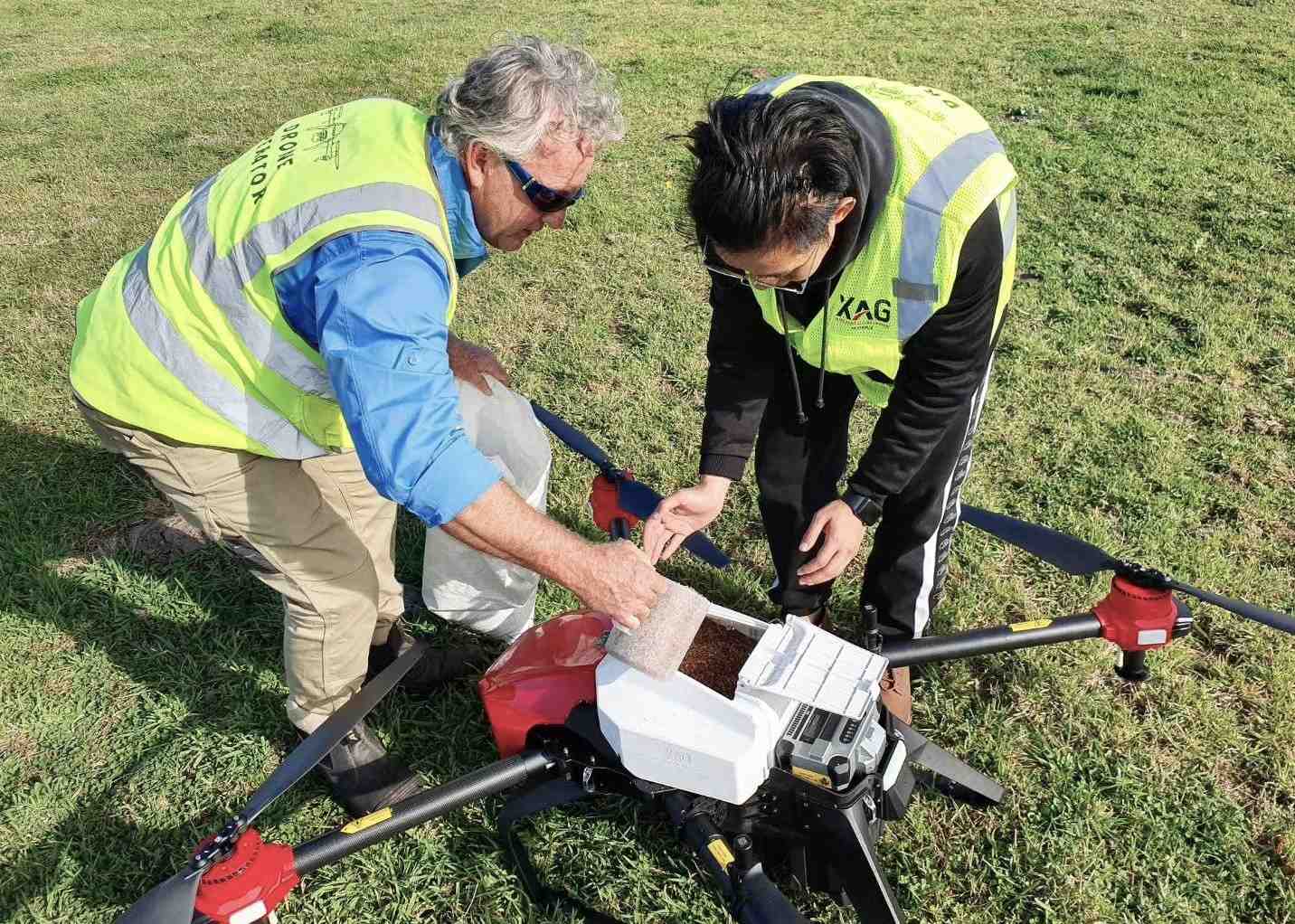 XAG drones allow seeding to be done on Lake Cobrico, where landowners and managers used to find it difficult to restore the wet, inaccessible fire-impacted areas. During the operation, the drones accurately followed the pre-set flight route, while harnessing high-speed airflows to project seeds from 2-3 metres above the ground. Also, seeding rates could be precisely controlled and adjusted in real time to ensure that the proper amount of seed was distributed evenly into the targeted bare land. This has not only limited the exposure of staffs and ground vehicle to rugged terrain, but also avoided using either too much or too little seeds.

HDLN co-ordinator Geoff Rollinson said in an interview with Cobden Timboon Coast Times that, drone technology provides access to all areas despite the complex landforms. “This project wouldn’t be able to go ahead in the normal manner because some areas of Lake Cobrico are unstable,” he said. XAG is the first business in Australia to obtain swarm flight approval from Civil Aviation Safety Authority (CASA), therefore operation of up to five drones by one pilot is made possible to increase efficiency.

By innovatively using drones for direct seeding, XAG has transformed the way ecosystem restoration works are conducted. Seeding by hand or ground equipment is inapplicable to Lake Cobrico where part of the peat swamp is difficult to access; this approach might also disturb the vulnerable post-fire vegetation and soil. Aerial seeding by plane or helicopter can cover a larger area, but besides costly, it might result in seed drift and uneven distribution that might adversely affect a successful outcome. 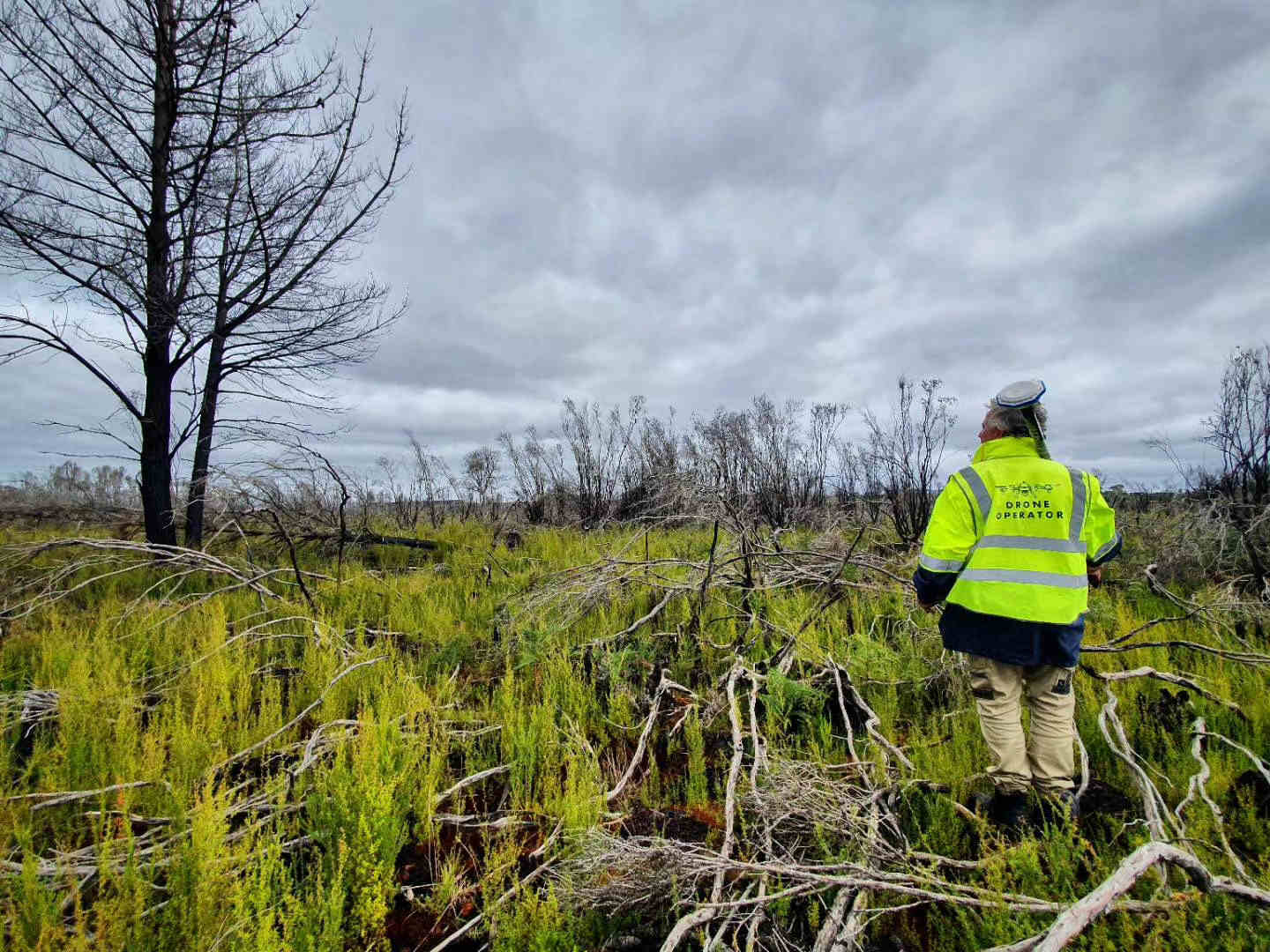 The trial project in Lake Cobrico demonstrates the best practice of drones to regenerate fire-impact peat swamps in a safe, cost-effective manner, without human or mechanical trampling on vegetation cover. XAG’s drone seeding solution is now recommended by DELWP and HDLN as a ‘well-designed and sustainable option for environmental restoration works.’

Bushfires are a natural part of Australia’s ecosystem, in which many plant species develop to become fire-resistant. However, the 2019-20 Australian bushfires, as one of the most severe, has brought devastating, long-lasting impact on the world’s biodiversity. Over 17 million hectares of land was burned across the nation, with an estimated one billion animals killed in the raging fires. 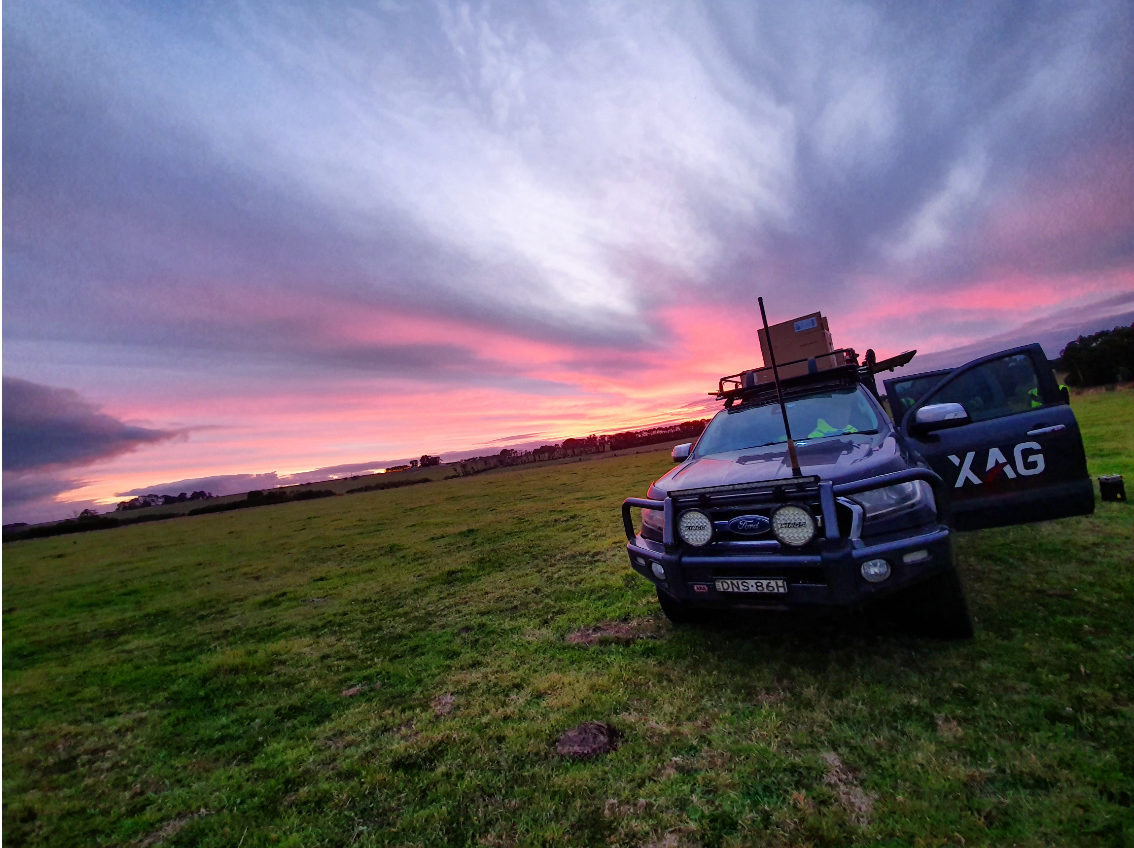 Facing great environmental challenges caused by the fire disaster, Australia has been going through a bumpy pathway to long-term recovery. New technologies can empower government and land managers to restore the fire affected regions under safer operating conditions. XAG’s smart agriculture solutions, including drone surveying, remote sensing, and precision chemical application, have been gradually adopted in Australia. If drone seeding techniques can be scaled up for ecosystem restoration across the states, it would help to accelerate the footstep of Australia’s fire recovery.