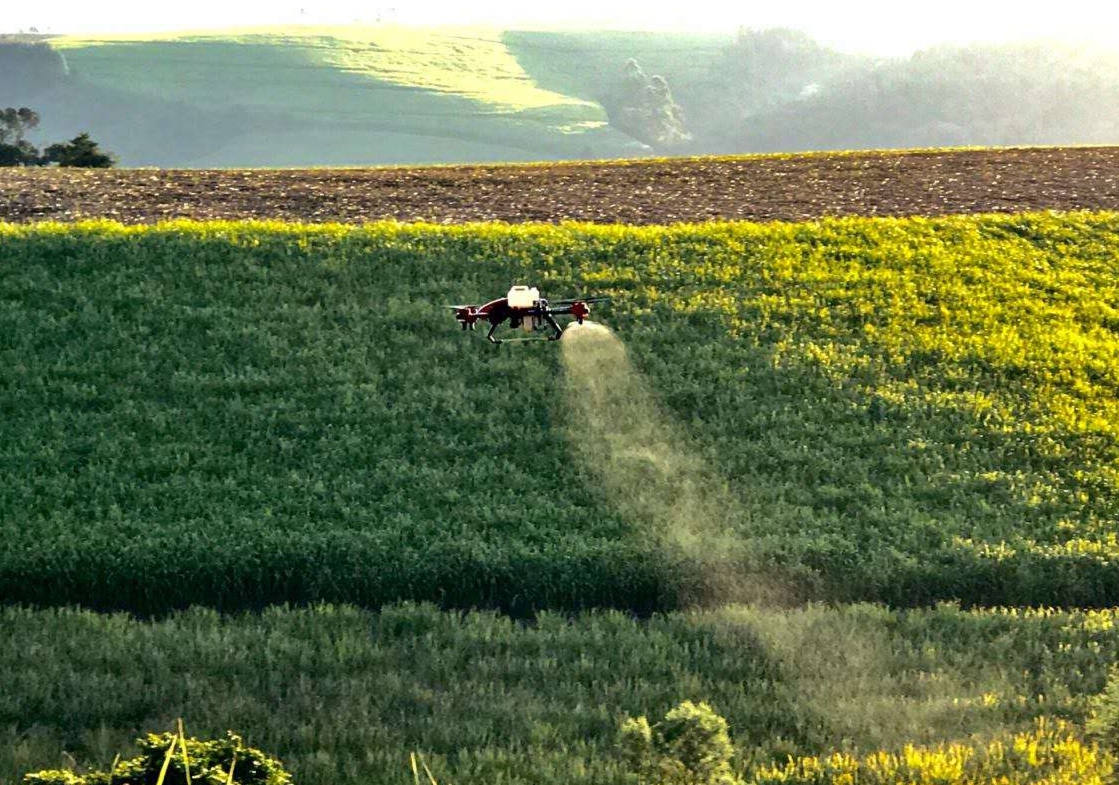 2 July 2020, KwaZulu-Natal – Drones, with specialty spraying technology, was deployed for a recent sugarcane ripening trail in South Africa, showing an evident increase in the amount of sugar extracted from these canes. This might signal a potential improvement in profit margin for the cane growers, who have been incurring loss from the country’s ailing sugar industry.

Primarily grown in tropical and subtropical regions, sugarcane is the type of perennial, high-value cash crop that serves as juicy fruit as well as the major feedstock for sugar production. South Africa ranks the world’s top 15 sugar-producing countries that provide cost-effective, high-quality sugar products. However, due to a series of interweaving threats, mainly the influx of cheap imports and the imposition of sugar tax, South Africa’s $833 million sugar industry has been struggling to stay competitive in the global market. Crop-spraying drones, meanwhile, gently tap in and get prepared to give a new lease of life to this industry. 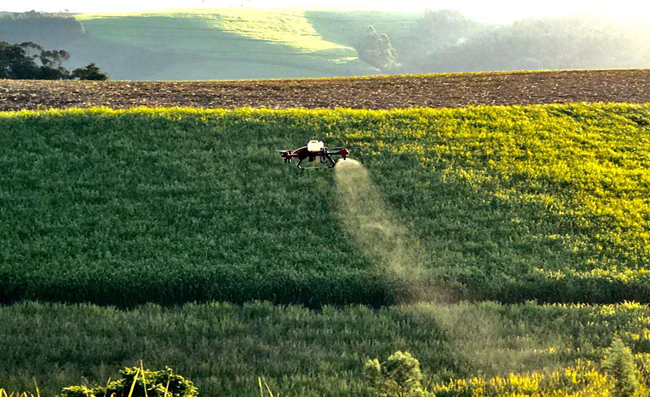 This June, in Seafield Farm, located at the Midlands South region of KwaZulu-Natal, a new round of sugarcane harvest arrived. What made this harvest season special was that a commercial ripening trial was conducted for the first time to compare the efficacy of drone and helicopter. Ripening refers to the process of applying chemical ripener to enhance the content of sucrose in the sugarcane plants usually six to nine weeks before harvest. The ripening application has been widely adopted as routine management that proves to effectively improve cane quality and sugar yield.

In this trial, different fields of the Seafield Farm were selected, each of which divided into two areas between 1 to 5 hectares assigned to different ripener applications. The drone used was XAG P20, which carried a custom spraying attachment and 12-litre smart liquid tank designed in a modular fashion. It followed the pre-set flight route, operated at a fixed height 2 to 3 metres above the crops, and sprayed accurately into the target fields. Results show that the traditional manned helicopter was considerably outperformed by XAG drone in both cane yield and quality of the harvested crops.

The areas ripened with drones had a small, yet significant 1% increase in recoverable value (RV), compared to those ripened with helicopter. In South Africa, RV is the accepted measure of the amount of sugar recovered from every ton of cane crushed in the mills. “This means a lot to us. With higher sugar extracted from every ton of sugarcane, we get paid higher and my farms become more profitable,” said Kim Hein, the licensed operator of XAG drone as well as cane grower who has been testing the feasibility of drone spraying solution in sugarcane cultivation.

Under the RV Cane Payment System since 2000, the South African farmers are remunerated for their harvested sugarcane based on recoverable value. As RV% generally falls within 9% to 14%, the more than 1% increase is a relatively satisfactory progress for sugarcane growers to obtain a greater return on investment. This smallest breakthrough could mean a great deal to individual farmers facing an ailing sugar industry.

The recent two years have seen a considerable drop in the market price of RV, which means that farmers are paid less for the sugarcane of the same recoverable value. This is largely attributed to the flood of low-priced sugar import and the introduction of tax on sugar-sweetened drinks (or health promotion levy) that brings down the demand for local sugar.

Small-scale growers being the early adopters

Despite the market chaos of the sugar industry, South Africa has granted the legal take-off of agricultural drones last year which could innovatively transform the labour-intensive farming ecosystem. Kim Hein, the man behind the Seafield Farm ripening trial, has purchased agricultural drones from XAG to tend its self-owned 200ha sugarcane field as well as those of his farmer counterparts.

“Drone, imagery, and smart agriculture system can help us solve many environmental and labour problems,” Hein said. Drones with precision spraying ability can address the increasing pressure to use less chemical, while reducing labour usage to tackle the rising labour cost that is disproportionate to the quality of work done. As the advantages of drone technology start to shine through, there has been a growing acceptance of drone-based treatment by cane farmers, who has been dealing with difficulties to manage this specialty crop.

Sugarcane plants can reach 3 to 7 metres high, that ground equipment such as tractors are inapplicable. Manual option with knapsack sprayer can expose field workers directly to the chemicals. This leaves manned aerial approaches, such as helicopter and airplane, to be used for sugarcane ripening over the past 20 years. 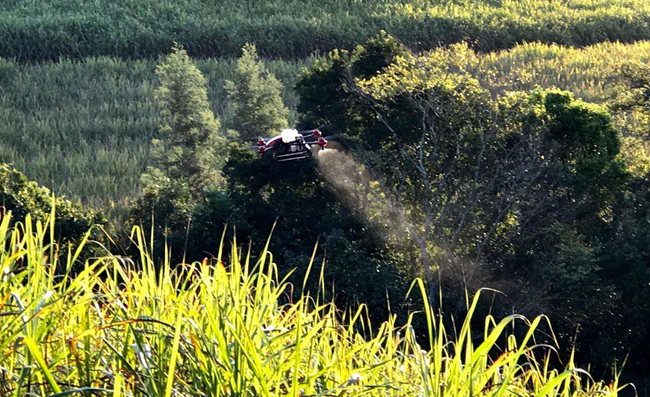 According to Heim, helicopter spraying can treat large areas very quickly, but the downside of it was that most sugarcane fields are quite small in size. According to the South Africa Sugar Association (SASA), small-scale farmers constitute 90% of the nation’s 22,949 registered sugarcane growers, predominantly located in two provinces namely Mpumalanga and KwaZulu-Natal. They form the backbone of the sugar industry value chain.

“We usually end up with problem with the helicopter company which offers a minimum spray of 50 hectares a day, but we only want to do 2 to 3 hectares a week. This does not allow any flexibility in the ripening process which means the outcome might fail,” explained by Hein. Large airplane and helicopter can only be subject to blanket spray, which means they work on huge areas at a time that does not match well with farmers’ harvesting schedule.

Instead, the drones that Hein uses are designed by XAG to facilitate precision applications in agriculture. They can smoothly operate on various terrains, no matter steep slopes or irregular-shaped plots, which are common places where most South African sugarcane plants are grown. Owing to real-time kinematic (RTK) positioning and the special atomised nozzles, XAG drones can spray more precisely and evenly on target areas without affecting the neighbouring fields not yet ready for ripening. This help cut down the use of chemicals by 30% and converse agricultural water by 90%.

Get ready for the Sugar Master Plan

The introduction of precision drones into farming complements government’s determination to rejuvenate the sugar industry. The Department of Trade, Industry and Competition has announced the Sugar Masterplan this June that marks a major milestone in efforts to ensure the health and longevity of the industry.

The sugar industry makes important contributions to South Africa’s economic activities and rural employment. Its direct and indirect employment is estimated at 435,000 jobs, as well as representing over 11% of the total agricultural workforce. However, based on the SASA statistics, the annual sugar production has declined by 25% over the past 20 years, while the number of sugarcane farmers experienced a decline by 60% along with a reduction by 45% in sugar industry-related jobs. 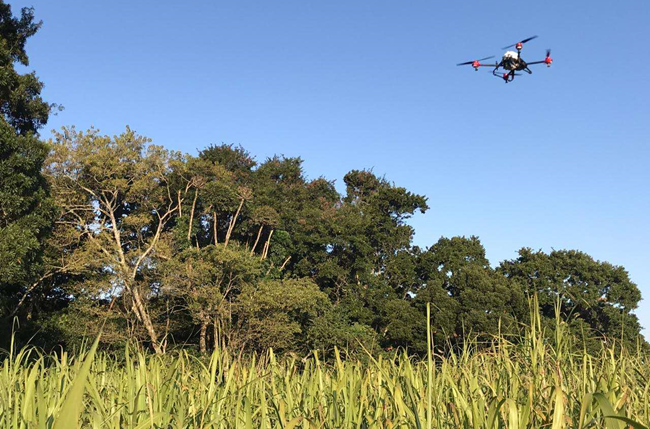 XAG drone flew at a fixed height above the sugarcane fields

Amid industry reconstruction, smart agriculture technology such as drones could play a new role in the upstream part of the sugar value chain. Through generating higher recoverable value, reducing labour costs, and minimising the use of chemicals, drones could help to guarantee sustainable supply of sugarcane and improve the profitability of small-scale growers.

When talking about his future plan, Kim Hein expressed positive attitudes towards the scale-up of smart agtech. “The number of tasks that can be done with drones have growing. We are now testing new applications to treat sugarcane crops at different stages in ways we could never imagine in the past.” In South Africa, sugarcane is harvested in an 18 to-24-month rotation, when agricultural drones can apply throughout the period from field mapping, fertilisation, controlling diseases, weeds, and pests, to ripening.