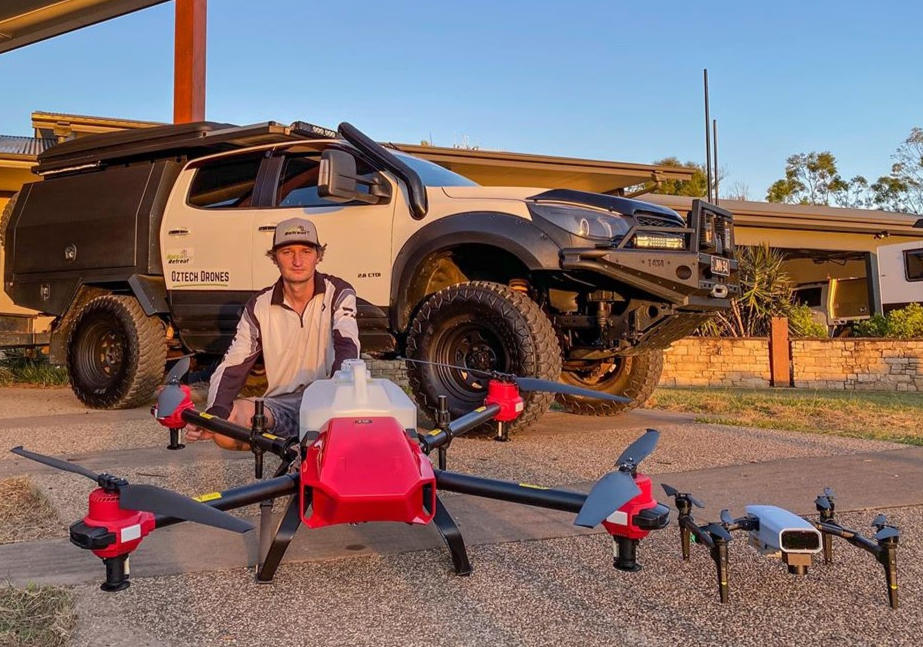 Bundaberg, Australia, August 14, 2020 – After three years of intense drought and months of bushfire devastation that had badly battered the continent, Australia now speeds up its recovery gazing into a long-awaited bumper harvest from the resurgent winter cropping season. Among the various technologies tending the expanded size of sown areas, drones designed by XAG are on track to take the pressure off chemical use and water scarcity. They get into the difficult-to-access cropping areas which used to be left in ruin, while spreading seeds to restore the overgrazed pasture. 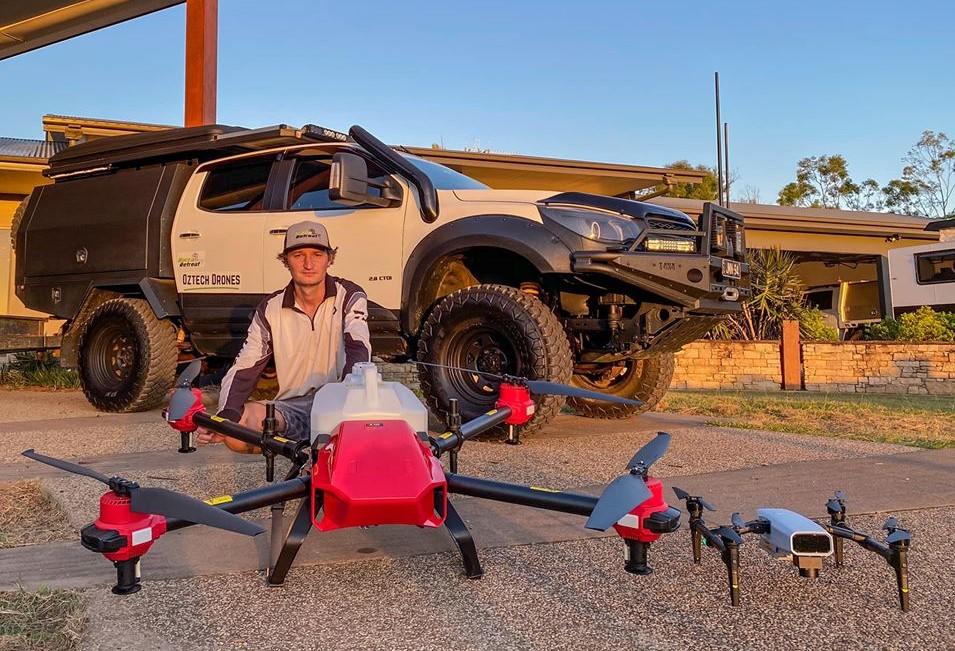 The Australian Bureau of Agricultural and Resource Economics and Sciences (ABARES) has forecast the winter crop yield to be 44.5 million tonnes in 2020–21, which is 11 percent above the average annual level of the past ten years. This is owing to the favourable weather conditions, as rain began falling steadily and soil developed a good moisture profile.

Despite the COVID-19 pandemics keeps presenting challenges amid a second wave, agriculture has shown strong resilience, becoming one of the few bright spots of Australia’s economic activities. Sales of agricultural machinery are booming, as well as farmers’ demand for crop protection services.

Heed the call of countryside

Jamin Fleming, a fledgling drone entrepreneur based in Bundaberg, south-east Queensland, has been working flat out between farms since June, to provide aerial treatment on pests, weeds, and crop diseases. He is among the tech-savvy, keen millennial generation who passionately embrace a fulfilling career in agriculture.

Unlike other parts of the world with an ageing farming population, Australia has seen a return of young talents into the countryside, either inheriting the land to be the next generation of farmers, working for farm businesses as farmhands, managers, and agronomists, or starting their own companies as service providers. An insight snapshot from ABARES has highlighted that more people are now entering into the agricultural workforce, with the proportion of those under 35 years old is on the rise.

“Australia’s agricultural workforce is getting a lot younger now, because I think a lot of young people don’t want to be in an office or doing the same thing every day. Agriculture has a great range and the technology is getting better every day,” said by Fleming. Since Australia’s agriculture is a significantly volatile industry plagued by harsh, unpredictable weather conditions, innovations are desperately needed from these new faces to help manage the enormous risks of climate change. 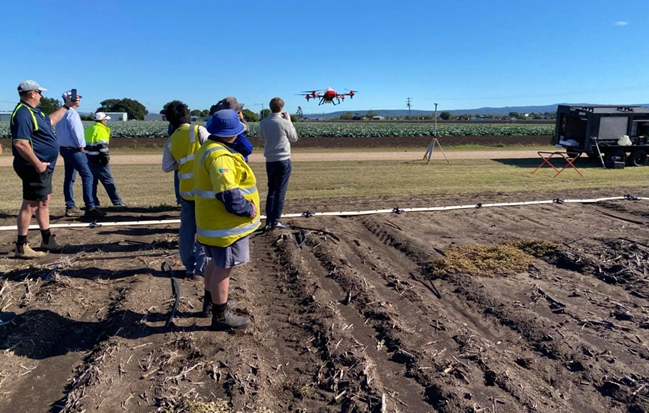 Growing up in a large cattle farm, Fleming upholds the history and culture of Australia’s agriculture, but also breathes new life into the social, environmental side of its sustainability. With a whole set of XAG’s agricultural drone gear, he founded his own agribusiness Oztech Drones to exploit the huge untapped potential of drone technology, specific to Australia’s vulnerable farmland. Fleming has been closely working with XAG, an agri-tech company and one of the world’s largest drone makers, to dismiss farmers’ suspicions and scale up drone applications across the state of Queensland.

“The biggest challenge I find is people find it hard to believe that our drones can do what we say they will do. Hence why I often drive and take time out of my day to visit potential clients to show them what we can do, and then they are always blown away with what we are able to achieve,” he said.

Until recent weeks, Jamin Fleming has been working with Queensland’s local growers, such as Redrock and Suncoast Gold Macadamias, on a series of trials to apply fungicides and fertilisers with XAG’s drones on macadamia trees. The Australian macadamia industry, with a farm-gate output value of AUD 267 million in 2019, has been leading the world in its adoption of sustainable farming practices and climate-resilient productivity. 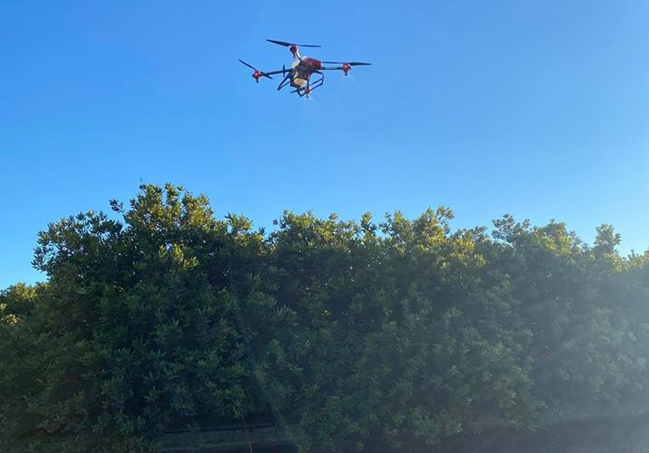 Macadamia tree spraying trials for uses of fertiliser and fungicides

Macadamia trees have the natural ability to optimise water consumption, adapt to dry condition, and absorb substantially higher amount of carbon, suggesting in-built sustainability unmatched by many other crops. According to the Australian Macadamia Society, each year 70% of its macadamia crops, as confectionary and healthy snacks, are exported to over 40 countries, while this constitutes 30% of the global production.

However, tractor-mounted spray cannons are still widely used as the spray tool for pest and disease management in macadamia orchards. As the industry is committed to minimising its carbon output, the use of heavy diesel machinery should be further limited, and this creates an untapped area where drone-based solutions from XAG can reduce 30% chemical use and conserve up to 90% water.

Fleming sheds light on how drones facilitate precision agriculture. “We first mapped an area of the farm out using the XMission survey drone and found the trees that were lacking in health. Then, we sent the crop protection drone just to spray those specific trees rather than the entire crops as normal spray rigs would do.”

With this fully autonomous drone, farmers can even target at individual plants and skip the spacing between trees. “We found the spraying drone can spiral over larger trees with better coverage of the whole canopy. Also, you can pre-program the drone to conduct hover spray over the smaller trees, which is more efficient,” he said. 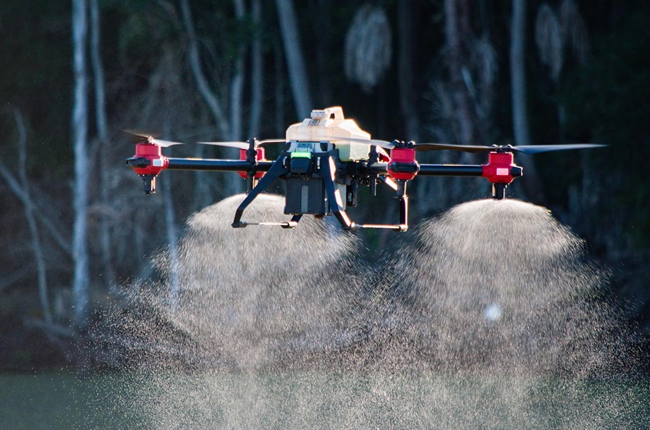 Results from the trial phase also showed that droplets were broken down into tiny particles of different sizes that could reach the lower foliar of the macadamia trees. The big picture here is trying to help macadamia growers prioritise the protection of water, minimise pesticide usage from traditional techniques, and eliminate possible chemical drifts. Given that water shortage has been a persistent issue in Australia, such benefits of drone applications should be seen across the entire agriculture industry which accounts for three quarters of total water use.

Fly over the toughest places

Though as an industry newcomer, Fleming’s drone business has really taken off to accumulate field experience on a wide variety of crops, including grains, fruits, nuts, and vegetables. Fleming said drones can flex their muscles over complicated terrains, where large manned machinery such as tractors or helicopters find it difficult to handle the operation. He has just contracted to one of the largest sweet potato growers in Australia, managing invasive weeds with XAG drones in all their channels, hard-to-reach areas and around the dams.

“We also help them with controlling weeds around water hydrants in the middle of fields. In one field, there could be 50 hydrants which a tractor used to drive through damaging the crop to get to these hydrants. Now using the XMission drone we can survey the entire field, find the hydrants, and send the spray drone out to only target the hydrant,” he said. Thanks to this nimble, flexible technology, any crop damage is eliminated to help farmers close their yield gaps.

With a good drop of rain and mild temperature, many farmers in Australia are very thrilled to have one of their best cropping seasons in lifetime. Yet, a long-unseen wet winter also brings another big problem to disease management on waterlogged areas after rain. Eyes on the issue, Fleming has also started working with fruit growers on strawberries.

“Some of their fields have low area in them which after rain or excess watering are inaccessible by tractor. And therefore, pesticides and fungicides cannot be applied leaving the strawberry plants prone to diseases and pests. We come in and identify the low areas and then spray them all with applications recommended by the agronomist.” 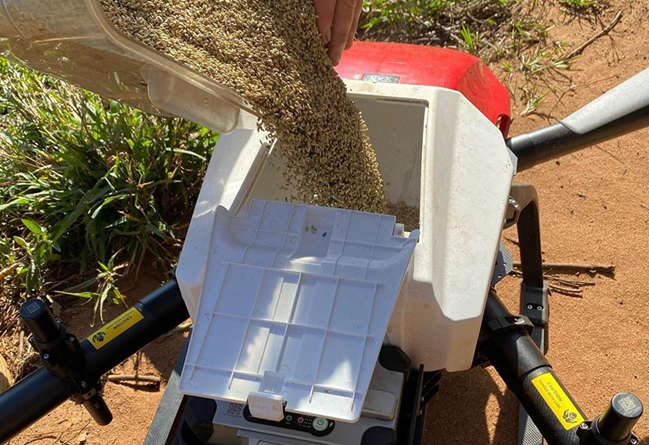 While looking to create a pest suppressive landscape, drones can be of great use in Australia’s 332 million hectares of livestock farms which is 10 times the size of land used for crops. As overgrazing, drought, and the warmer climate have been turning pasture into degraded land, demand for pasture seeding is growing, now added onto Fleming’s long list of pilot jobs. The modular design of spray drone allows it to switch into a “flying spreader” within minutes when embarked on a custom spreading attachment.

“Depending on the application rate, we can seed up to 15 hectares an hour. Now hopefully we get some more rain at the end of the week to help it sprout,” he said. It is hoped that the more precise, safer method of distributing grass seeds would be scaled up to rehabilitate the fertile land of Australia.