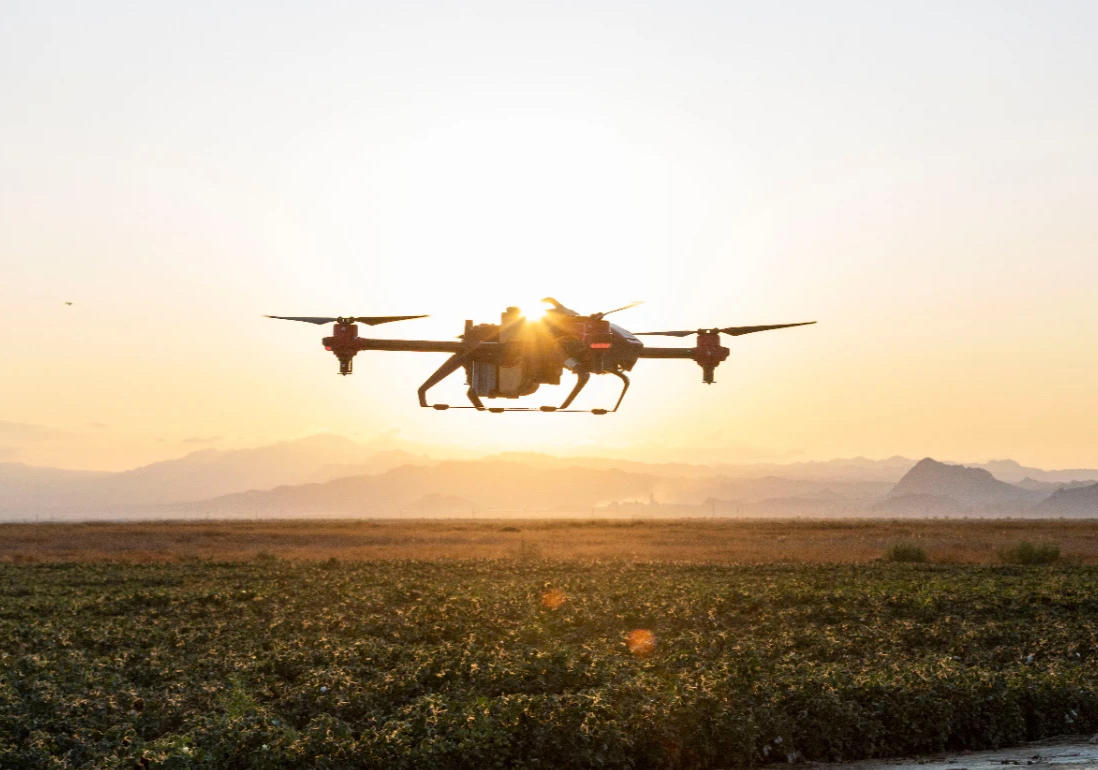 14 October 2020, LONDON – XAG received recognition for its sustainable farming solutions by Reuters Responsible Business Awards 2020, the world’s leading Awards celebrating leadership in sustainable business. The company was named a winner of the Sustainability Innovation category with its unremitting efforts to scale up agricultural drones, robots, Internet-of-things, and artificial intelligence in rural areas of developing countries. As food insecurity is aggravated in the wake of COVID-19, these unmanned technologies have been leveraged to shape the future of smart farms by addressing rural ageing crisis and loss of biodiversity.

The 11th Reuters Responsible Business Awards were announced at a virtual ceremony on 8-9 October, recognising those that truly have an impact on business, society, and the environment. For the past 11 years winners of the Awards spanned the globe, covering both industry giants and new tech forces, such as Unilever, IKEA, Intel, Mastercard, Coca-Cola, Goldman Sachs, UPS and etc, which developed innovative strategies pushing forward the boundary of corporate responsibility and sustainability.

This year’s Sustainability Innovation Award, one of the thirteen award categories, was given for agriculture technology company XAG which puts sustainability at the heart of its business strategy. The company is committed to empowering smallholder farmers with smart agtech to grow more nutritious food with less environmental footprint on the planet. This is achieved through the three core pillars of XAG’s smart agriculture solutions that are incomparable in terms of scope, impact, and scalability.

• Develop precision farming equipment, including drones and unmanned ground vehicles, which are nimble, flexible enough to adapt to farms of different sizes and operate on varied terrains.

The judges were very impressed by the innovative and scalable actions of XAG to bridge the gap between resources and skills for smallholders and family-run farms. “This is an excellent example of utilising technologies to drive social, environmental impacts which have been demonstrated immediately, particularly in the developing part of this world,” said Aris Vrettos, Director of Centre for Business Transformation, Cambridge Institute for Sustainability Leadership (CISL). 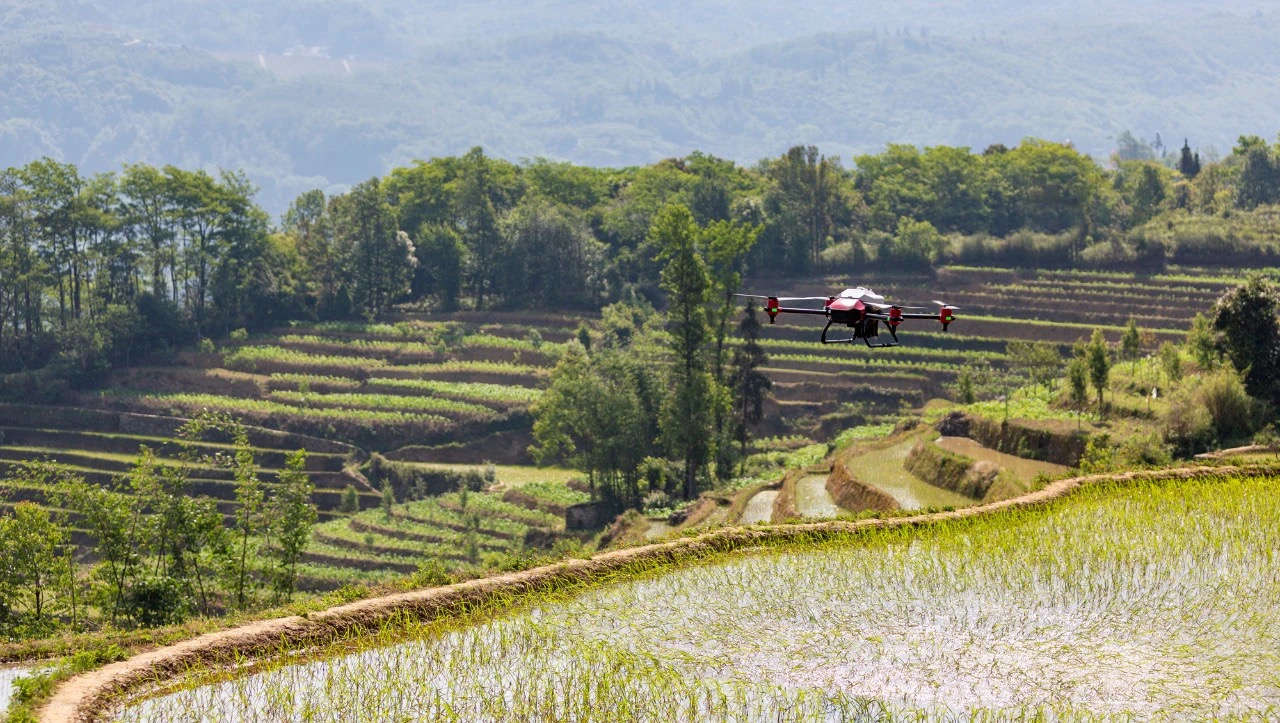 Since the transition from drone maker to agtech innovator in 2013, XAG has managed to introduce over 50,000 unmanned farming devices across 42 countries and regions. A wide range of drone operations involving precision agriculture practices, from sowing seeds and spreading fertilisers to crop spraying and field monitoring, have been delivered to 8.72 million farmers on 40 million hectares of farmlands.

The company is helping to efficiently improve crop yield and protect the health and safety of agricultural workers by eliminating the risks of chemical exposure on fields. Besides cutting down carbon emissions in response to climate change, the replacement of diesel tractors and knapsack sprayers with electric-powered drones also reduces the use of pesticides and fertilisers, as well as conserving water resources.

Safeguard one of the toughest rice terraces

XAG’s agtech scale-up actions were initiated under the challenge that, with less workers to farm and no more arable land to exploit, the global food system will be struggling to feed the world’s whopping 10 billion people by 2050. Small and midsized farms are the major forces of food production in most developing countries; however, they still depend on manpower to grow crops and usually apply an overdose of pesticides due to lack of smart tools. Large ground equipment cannot be adopted in these areas because of the varied terrains, smaller size of land and high cost. 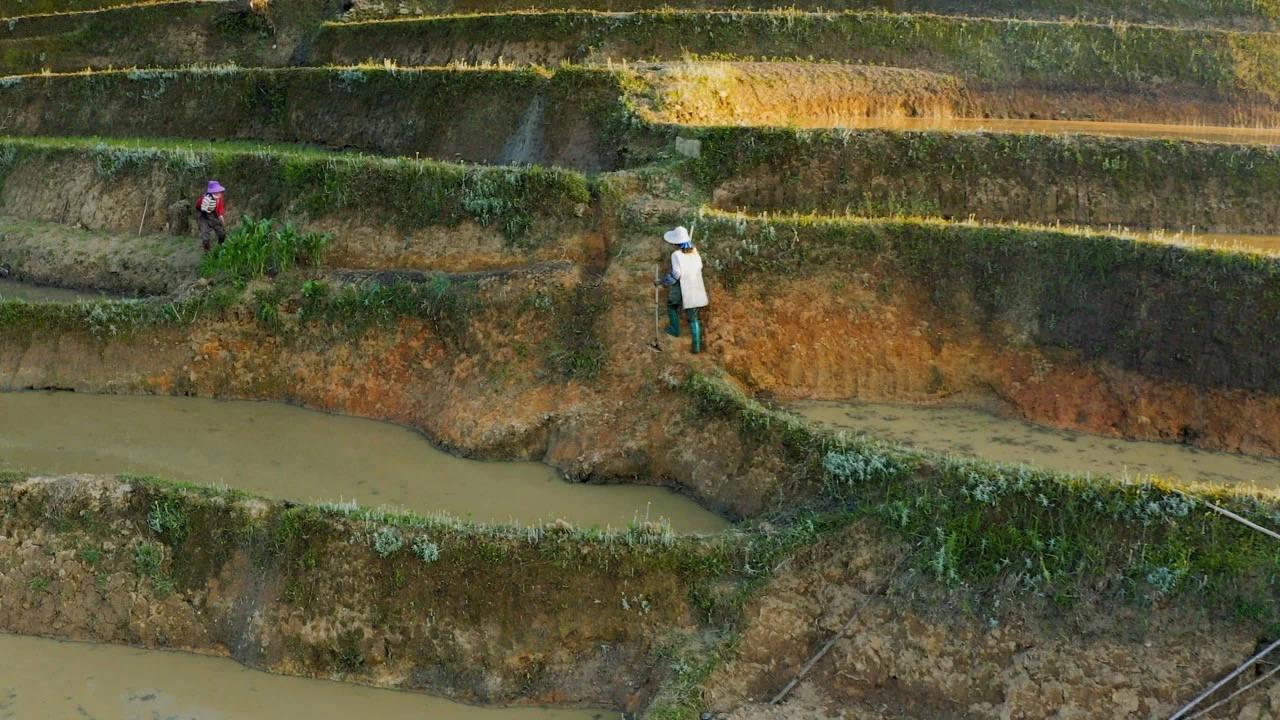 Farmers climbed over the sloped rice terraces to manage the crops

Honghe Hani Rice Terraces, located in China’s Yunnan Province, is one of the key places for red rice production that responds to both difficulties and opportunities of the high mountainous environment. Listed as UNESCO World Heritage Site in 2013, these rice terraces were crafted out of dense forests and have been developed into a complex farming system by the Hani people over the past 1300 years. But now, its agricultural civilisation is under threats of the shrinking and older rural workforce.

Since March 2020, XAG has galvanised a team of young professionals to bring its autonomous agricultural drones to cope with the rugged, irregular terrains where the red rice is grown. The rice terraces cascade down the steep slopes of the towering mountains, which at its narrowest point is less than one metre that traditional agricultural machinery was unable to reach. Since more and more youngsters are leaving the villages to seek better jobs in cities, elderly farmers form the backbone of the manual labour to cultivate the rice terraces.

Instead of putting people within the fields, XAG deployed its terrain-adaptive drones to release seeds and spray chemicals accurately over the pre-programmed route. This was the first-of-its-kind drone operations of direct rice seeding and spraying in the areas of Honghe Hani Rice terraces, unshackling the Hani people from labour-intensive fieldworks.

When it comes to the barriers to scale-up, XAG has been striving to dispel farmers’ suspicions about new technology through continuous training and demonstration. “Our ultimate goal is to create a smart agriculture ecosystem in which all the repetitive, tedious, and dangerous jobs are handed over to drones and robots, therefore farmers can focus on the process of decision making with the aid of big data and AI,” said Justin Gong, Co-founder of XAG.

Founded in 2007, XAG is an agriculture technology company and one of the world’s largest agricultural drone makers. It is devoted to advancing agriculture that can sustainably feed the world’s growing population with positive social impact on earth. XAG’s vision is to build the infrastructure of agriculture for the next 100 years, that will provide the world with sufficient, diversified, and safe food. To grow more nutritious food with minimal ecological footprint on earth, XAG has designed the three-pillar smart agriculture solutions that innovatively integrate drones, unmanned ground vehicles, internet-of-things, and artificial intelligence.