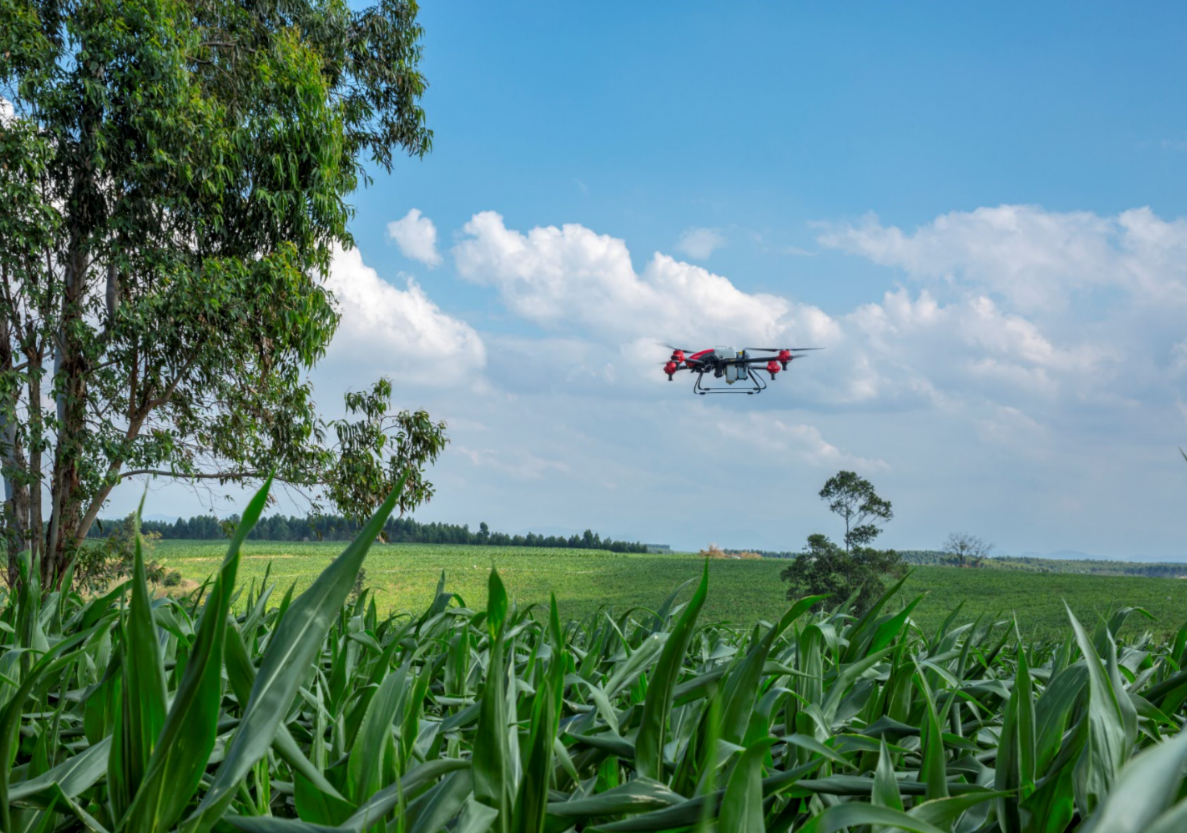 Ravenous, prolific and fast-moving, a mysterious pest is lingering luxuriously over the farmlands around the world, munching the entire cornfields almost overnight. This pest is called Fall Armyworm (FAW), a polyphagous grub that attacks more than 80 crop varieties and gets the name because it can rapidly troop into the croplands like an army. Since 2016, it has spread from the Americas to other 100 countries including China, where drone is utilised as one of the innovative solutions to fight against the pest. 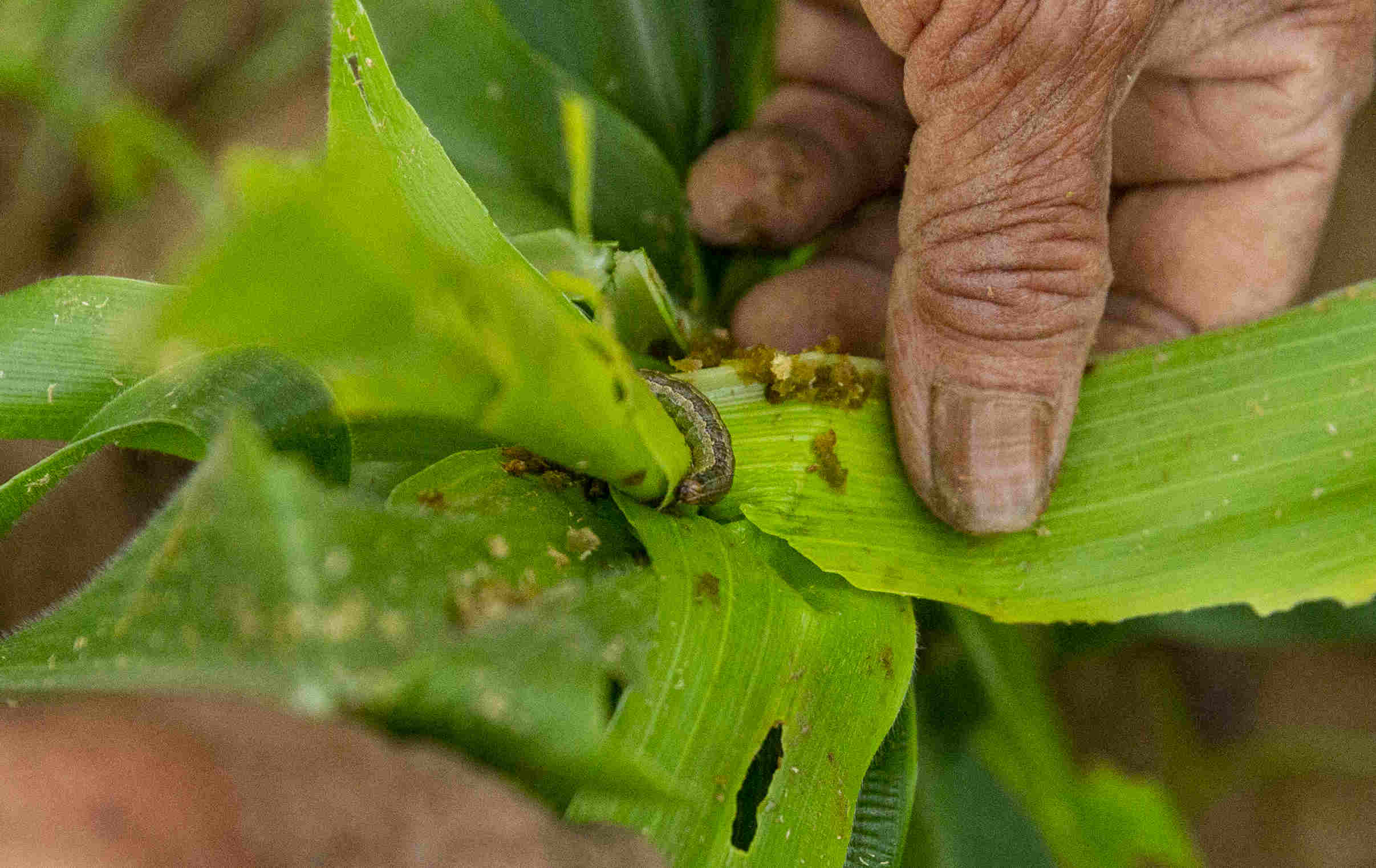 Fall armyworm, most fascinated with maize, is a highly invasive, destructive insect other than worm. At the larval stage, the FAW caterpillar, distinguished by a white inverted-Y mark on its head and four black dots arranged in square on upper surface of the last body segment, causes the greatest damage to the maize plant. If uncontrolled, they would devour the leaves, stems and cobs of the plants until nothing left. When growing larger, they even become cannibalistic and feast on their siblings until only 1 or 2 larvae remain on each leaf. 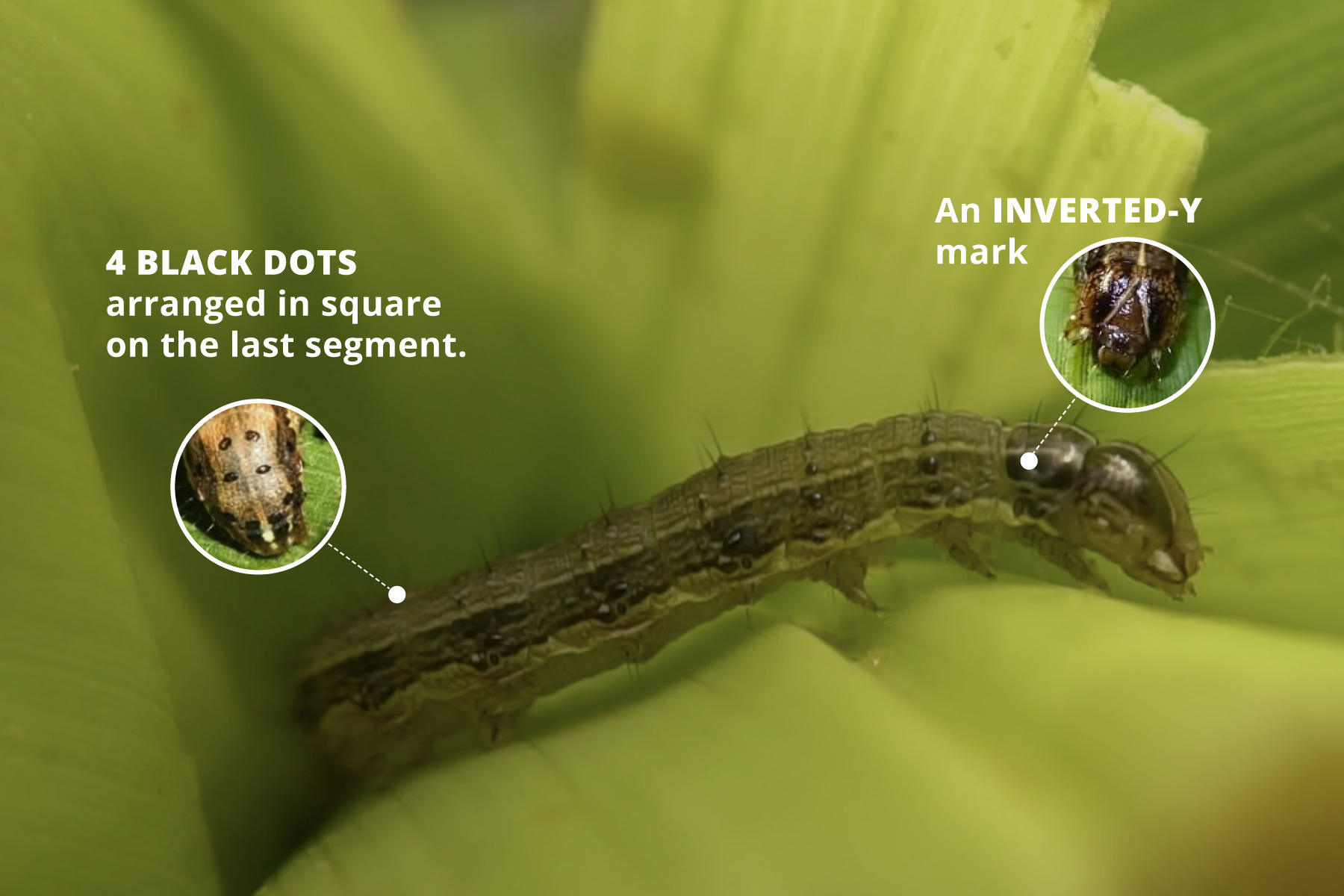 How to identify fall armyworm

What’s worse, the fall armyworm can attack all stages of the crops throughout the year in warm temperatures and do not require certain conditions for mass migration and outbreak to occur. It can fly up to 100km in one night, when grown into a moth; for example, a record of 1,600 km was made decades ago when the adult moths winged from Mississippi, U.S. to southern Canada in only 30 hours. A female moth, with strong reproductive ability, can lay as many as 1000 eggs during her lifetime.

Unsurprisingly, this tiny squirmy pest has been wreaking havoc over the main grain-producing areas. Native to tropics and sub-tropics of the Americas, fall armyworm for the first time crossed the Atlantics and invaded West Africa in early 2016, then sweeping across over 40 African countries in only two years. With its presence first detected in India in July 2018, these pests have now aggressively marched into Asia and spread eastward to most Southeast and Northeast Asian countries including Thailand, Sri Lanka, Myanmar, China, Japan and South Korea. 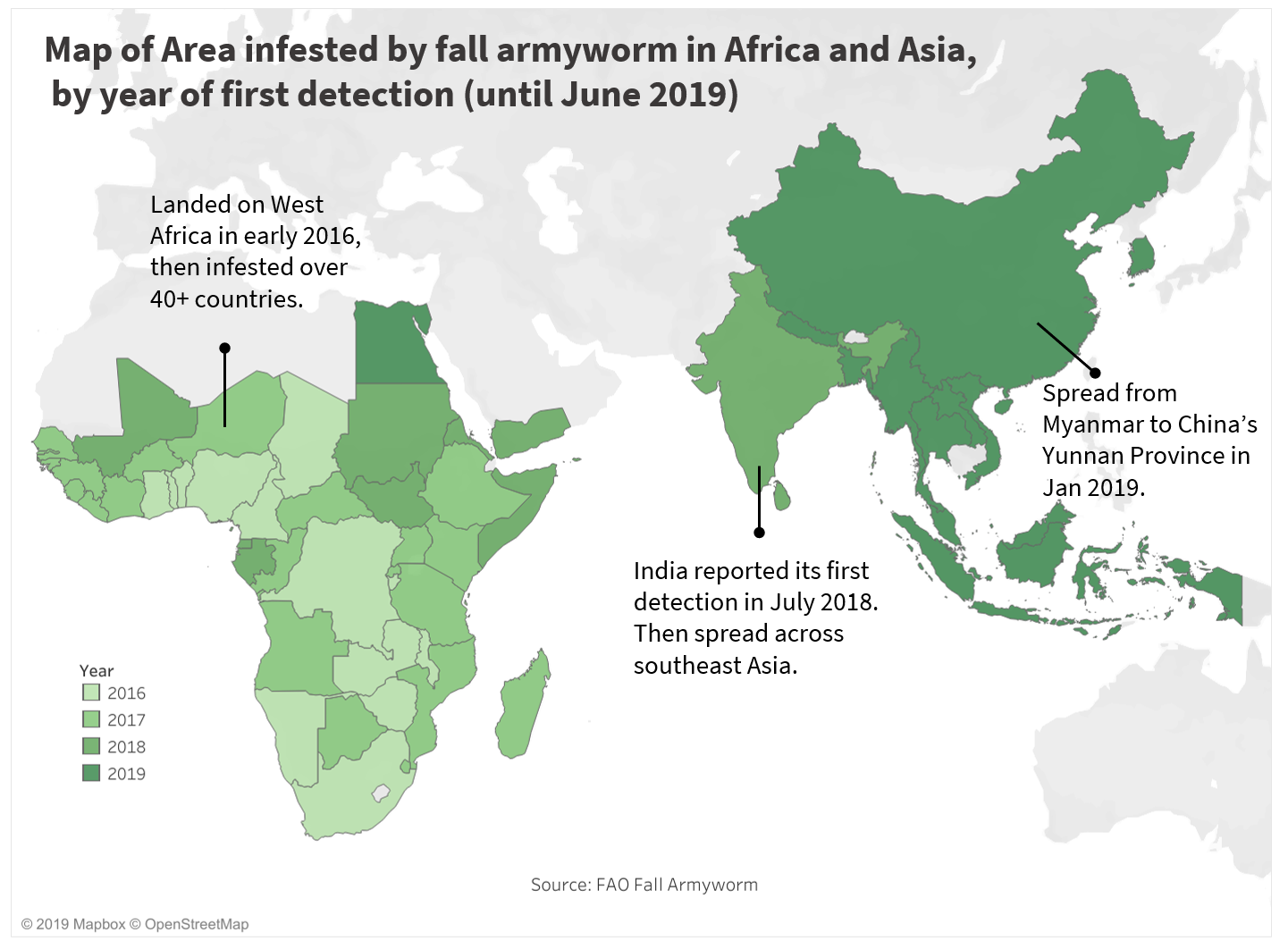 Area infested by fall armyworm in Africa and Asia, by year of first detection (until June 2019)

The prevalent infestation of fall armyworm has resulted in different extent of yield reduction, threatening food security and the livelihood of smallholders. According to the estimates of some international institutes, in Africa, FAW has struck over 1.5 million hectares of cornfields and the annual economic losses of the 12 maize-producing countries lies between $1 and $ 4.6 billion. As for Asia, it is predicted by the Food and Agriculture Organization of the United Nations (FAO) that crop losses can range from 1.2% to 20% in different countries.

A Tough, but Well-prepared Battle in China

Among all the newly invaded areas, China, the second largest maize producer, is expected to suffer a fierce attack from FAW. According to the government officials, since first detected in Yunnan Province this January, fall armyworm has rapidly made its way to 21 of China’s 34 provinces and infested nearly 600,000 hectares of farmlands in only 6 months. Timely reporting and on-going monitoring are helping to prevent a devastating large-scale outbreak in the country.

Also, well-validated chemical control has been leveraged as emergency treatment to cope with this pest disease. The natural habits of fall armyworm and China’s complex landforms have yet brought bigger challenges to the implementation of pesticide spraying in maize fields.

"First, the very hungry caterpillars can destroy a whole cornfield in just several days or even overnight, which requires prompt spraying actions to reduce the damage."

"Second, the FAW larvae always conceal themselves at daytime in the back of leaves, whorls or stems, somewhere traditional spraying is difficult to reach, whereas their feeding is much more active during night." 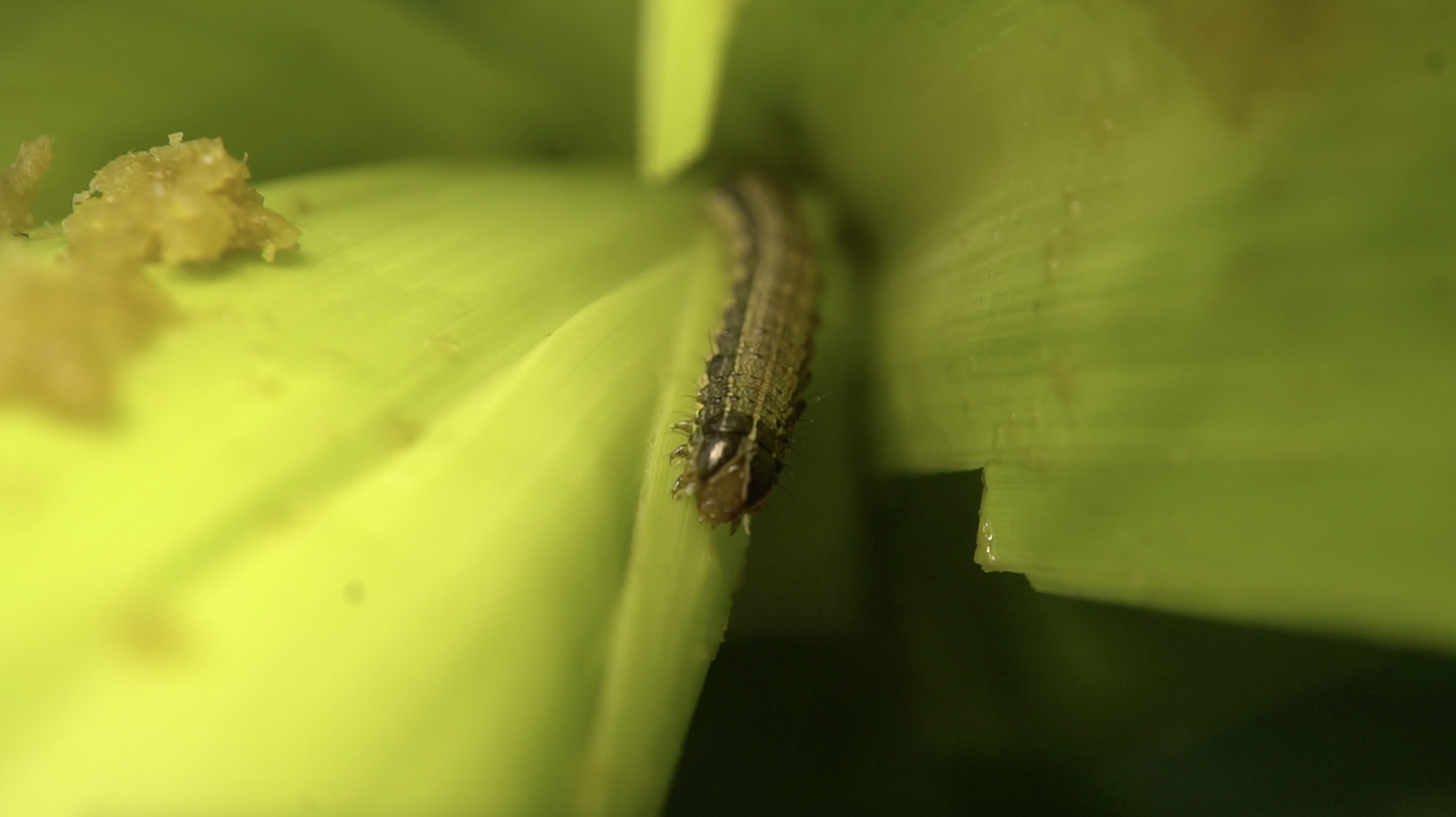 Fall armyworm burrowed into the corns

As for the agricultural environment, China’s main corn-producing areas lie in a long belt along the southwest, central and northeast, constituted by different terrains such as plain fields, hills, mountains and terraces. The severely afflicted southwest region, also the one bearing the brunt of FAW, is primarily covered by mountains. Large ground-based machines are not flexible enough to operate in such rugged terrains.

In some cornfields, where the planting density is too high for people with traditional sprayer to freely walk through the field, crop protection is much more difficult to unfold. Particularly, pesticide exposure is substantially increased, when the corn stalks grow higher than a man who have to direct the spray overhead. 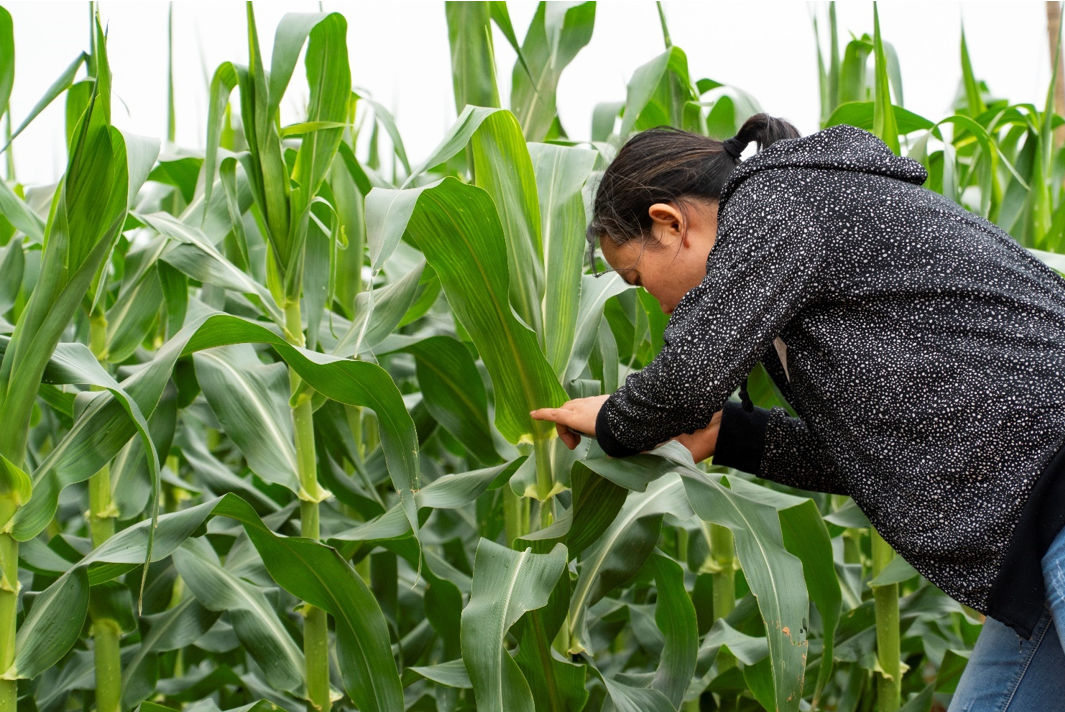 Farmer checking her corn stalks as high as a man

These problems would somehow limit the efficacy of chemical control conducted with traditional spraying approach. Apart from putting the operators in relatively high poisoning risk, manual spraying on tall corn stalks is so ineffective that it fails to meet the demand for a quick, emergent control over the gluttonous fall armyworm. Also, in order to cover a larger surface of the plants, farmers tend to spray multiple times of pesticides, which would lead to chemical overdose and massive waste of water. But in many cases, the pesticides still cannot reach the hidden caterpillars due to uneven sprays by hand.

Given the situation, smart agriculture devices such as drones would come in handy for fixing these problems, possibly with minimal environmental impacts. In China, professional farmers and agricultural service providers have already harnessed the existing drone technology to conduct appropriate chemical sprays and safeguard the country’ s crop production.

The drone, with centimetre-level navigation, can operate fully autonomously over complex terrains and easily adapt itself to different spraying conditions of various crop species, including maize. People hence can free themselves from much physical toil while no longer risking their health in the battle against fall armyworm. 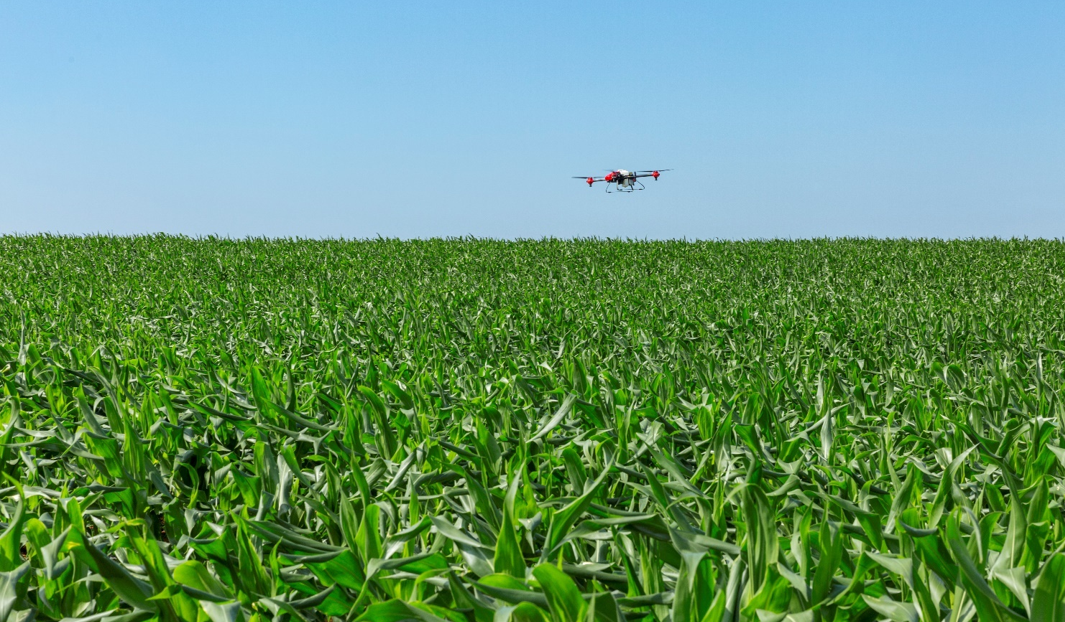 An effective large-scale emergency action is also made possible to suppress the encroachment of FAW in time. For example, the leading agriculture technology company XAG has developed a plant protection drone whose spraying efficiency can reach up to 14 hectares per hour. Drone swarm operation can besiege the infested croplands and kill the pests en masse within a large area, thus reducing the extent of moth migration. This drone can even safely operate to crash down the pests at night, when the caterpillars tend to reveal themselves and actively feed on the plants.

In addition, uniform applications of ultralow-volume pesticides can be achieved by drone as well. Specifically, the drone atomises the pesticides into micron-level droplets, so the chemicals can evenly adhere to the surface of maize plants with higher coverage rate. The strong downdraft generated by the propellers can significantly reduce liquid drifting and increase pesticide deposition, which means that both sides of the leaves and the central part of crops can be more precisely targeted. Such mechanism can not only increase fall armyworm’s exposure to chemicals but also cut down a large amount of pesticide use and better conserve the beneficial insects. 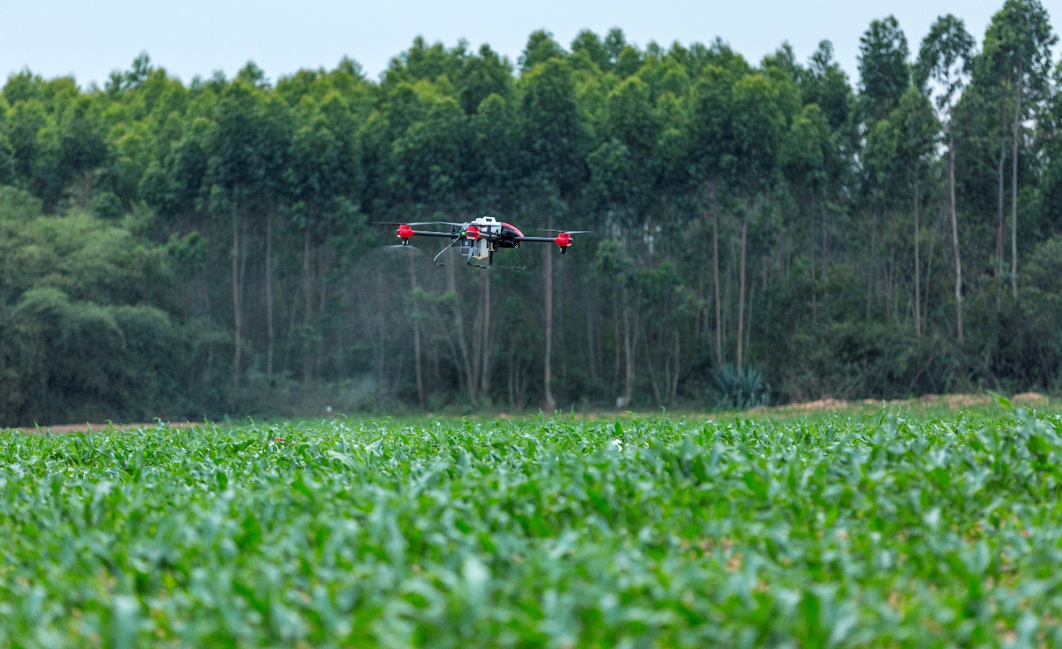 Agriculture drones with such precision spraying technology have started to travel across China and some other countries to help curb the spread of fall armyworm. This April, in China’s Guangxi Province, XAG and Bayer Crop Science has initiated their first-ever emergency control to help local smallholders ward off FAW on their maize fields. The plant protection drones on set, coordinated with Chlorantraniliprole – a low-toxicity synthetic insecticide approved for use, have effectively killed the pests and achieved a larval mortality as high as 98%.

Therefore, drone could be one of the safe, effective tools to improve control efficacy, but it needs some time for the farming community to fully accept and adopt such advanced technology.

Fall armyworm is most likely to remain a significant threat to food security in the foreseeable future. Though it is almost impossible to eradicate these voracious pests in one place, their spread and damage can be limited to minimum. Based on years of research and practical application in the Americas, a science-driven Integrated Pest Management (IPM) approach has been developed and embraced to specifically fight against FAW.

An effective IPM strategy integrates a variety of complementary techniques, including pesticide spraying, biological control, host plant resistance and agroecological landscape management, which aims to economically maximise the control efficacy while reducing the adverse impacts on environment and human. All these methods can fall into two main categories and be selectively adopted in combination, based on the analysis of infestation intensity and crop growth stages.

One kind includes those developing crop species genetically resistant to FAW and strengthening the resilience of the farming ecosystem (e.g., early planting, crop rotation, intercropping or companion cropping), which can lower the likelihood of an infestation. And when an attack does happen on field, the other type of approaches should be applied; for instance, spraying eco-friendly synthetic insecticides or bio-pesticides and introducing natural enemies, such as parasites, predators and pathogens, that prey on FAW can contain the pest population and reduce crop damage.

Chemical control intervention remains one of core approaches, especially when the pest density or the level of crop injury reaches certain action threshold. It is proven by field experience and research that the appropriate use of pesticides in accordance with national and international standards can effectively increase FAW larvae mortality and reduce crop damage in a safe manner. 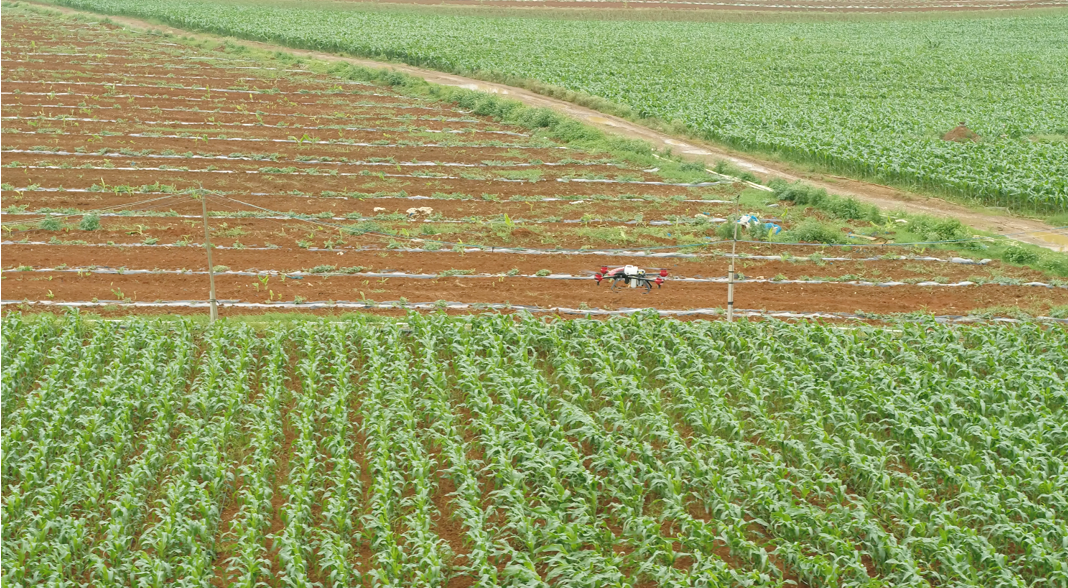 Chemical control initiated by XAG and Bayer in Guangxi, China

However, the application and efficacy of these control measures vary in different regions and crop species. In the Americas, where fall armyworm has existed for decades, some pest strains have gradually evolved resistance to pesticides. But the natural enemies and the genetically modified maize variety (e.g., Bt maize) are helping to effectively keep FAW under control.

By contrast, since fall armyworm is a new invasive species in both Africa and Asia, few naturally occurring biological agents have been present there to provide defences. Many local farmers, without any practical experience or professional knowledge, usually resort to chemical spraying immediately after they detect the damage. The control effectiveness, in some cases, is frustrating due to a mistaken “yes-spray” decision or pesticide misuse, such as improper application rate, wrong dosage, uneven spraying and the employment of fake or highly hazardous pesticides. Awareness and training programmes should be initiated to teach farmers the expertise on Integrated Pest Management techniques.

In conclusion, largely focusing on one single solution cannot help us win the battle against this vicious, crop-killing pest. A strong emphasis should be put into developing a holistic IPM approach supported by smart devices and customised for the local agricultural landscapes.

[1] The Food and Agriculture Organization of the United Nation. (2018). Integrated Management of the Fall Armyworm on Maize.

[2] Feed the Future, United States Agency for International Development, The International Maize and Wheat Improvement Center and the CFIAR Research Program on Maize. (2018). Fall Armyworm in Africa: A Guide for Integrated Pest Management.

copy the link
Previous:
Next:
Previous: A Dedicated Drone Enthusiast Starts New Adventure into Agriculture
Next: From Zambia to China, Drones Unleashed to Defend Crops Against Fall Armyworm
Back to News
More
XAG Drones Get Young People into Farming with Improved Income
2022-11-18 23:20
XAG P100 Drone: The Game Changer for Vietnam Rice Farmers Amid Rising Input Costs
2022-11-17 18:12
Rural Spotlight | Amazements from the Colourful Cash Crops
2022-08-19 15:15
Across Brazil: Drone as New Firefighter in Wildfires Control​
2022-08-03 13:58
WYSD2022 | Transforming Youth Skills for the Agri-future
2022-07-15 14:54