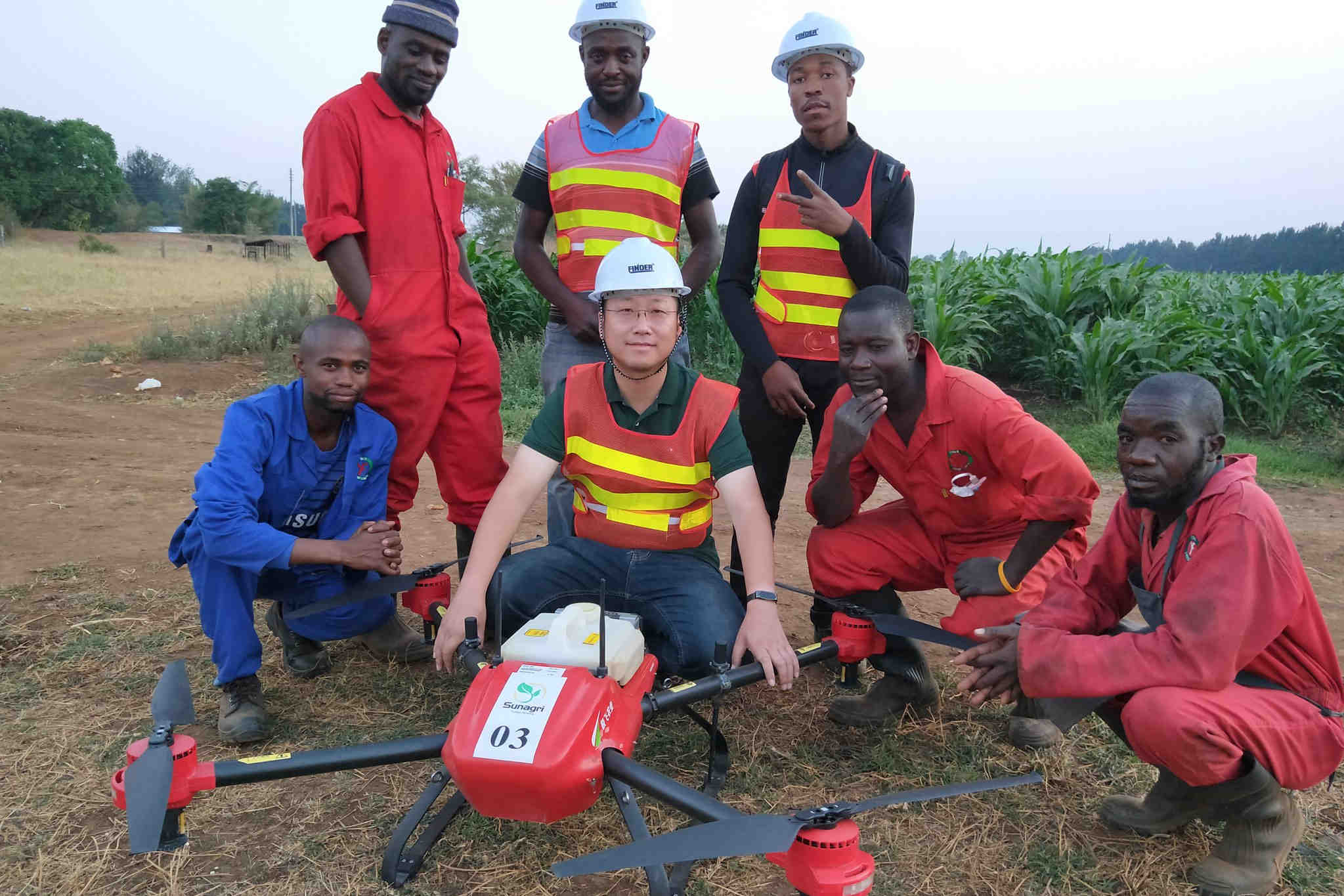 Almost exhausted and sweating all over, Bai Anwei, a crop-protection service provider in Yunnan, China, had been travelling around different cornfields with drones to spray pesticides for maize crops. He had already kept working by fields throughout the day, from 6 a.m. to 2 a.m. the next morning. “We don’t have much time. This is the only way to stop the pests from marching and wreaking havoc over more farmlands,” he said with a hint of bitter smile.

6,005 miles from China, Fraser Zhang was leading his crop protection team for another drone spraying experiment against the same kind of pests at dusk in Zambia. He has witnessed how Zambia has been suffering from the plague of pest disease nationwide. 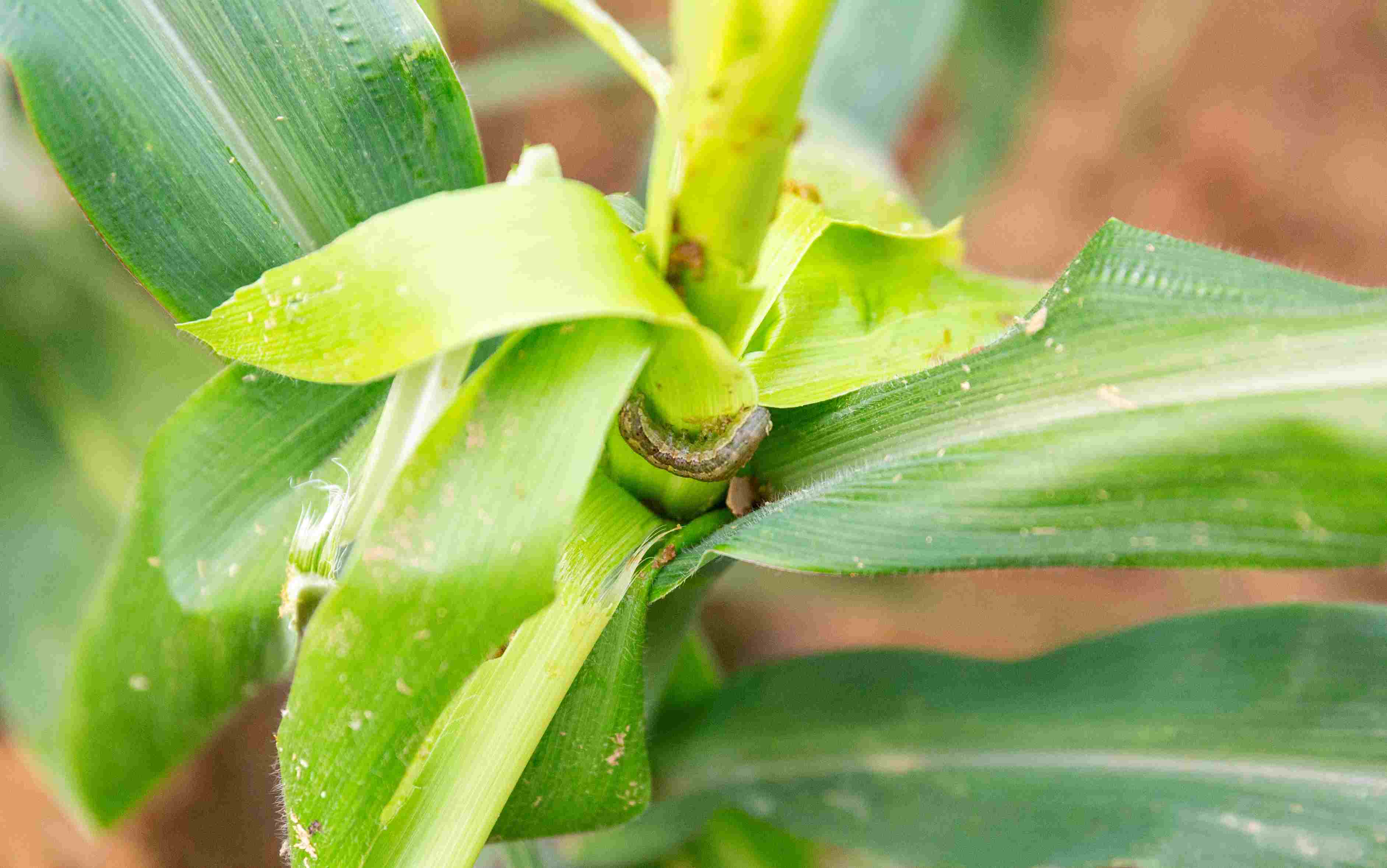 The rampaging pest that perplexed Bai and Zhang is called fall armyworm, a highly destructive crop invader originated from the Americas and spreading rapidly across Africa and Asia in recent years. This pest has been terrifying farmers and causing extensive yield loss around the globe, just like a virus.

Without well-validated natural enemy or genetically modified maize, local farmers in Africa and Asia mostly resort to traditional insecticide spraying but, in some cases, find the effect disappointing. Having developed new technology to replace the old fashioned, XAG starts actively engaging in the fight against fall armyworm in some of most affected areas, such as Zambia and China.

Check out our integrated news report on XAG's collaborative effort against fall armyworm:

Fraser Zhang, founder of Sunagri Investment Zambia Limited, is one of the early adopters who introduced drones into the battle against fall armyworm. As an agriculture technology service provider, he has been utilising XAG’s plant protection drones for aerial spraying in Zambia since 2018.

Fraser Zhang and his team member

Zambia is one of the regions where fall armyworm struck first in Africa in early 2016. The country has been facing a formidable fight, since the pests prefer to feast on maize which is the staple crop for Zambians. According to a national household survey, up to 99% of farmers reported that their cornfields had been infested by fall armyworm, with the average yield loss reaching 35%, equivalent to an economic value of nearly USD 160 million.

“Corn is considered a type of crop easier to grow and manage without any additional chemical treatment. However, the outbreak of fall armyworm changes everything. Farmers have to spray pesticides to kill the pests, otherwise they would be left penniless with a devastated cropland,” Fraser Zhang explained the situation.

In Zambia, use of pesticides involving hand sprayers has remained the most widely deployed method to contain fall armyworm. But obviously, this is not a safe, effective measure to ward off pests with strong migration and reproductive ability. “It is unpractical to conduct manual spraying over farmlands larger than 5 hectares, let alone a massive waste of pesticides and the risk of chemical poisoning,” Zhang added.

In addition, farmers usually get more frustrated when they have sprayed pesticides multiple times but without any effect. Inappropriate use of pesticides might be the reason, as well as fall armyworm’s unique natural habits that make it impossible to eliminate the pests by hand sprayers. 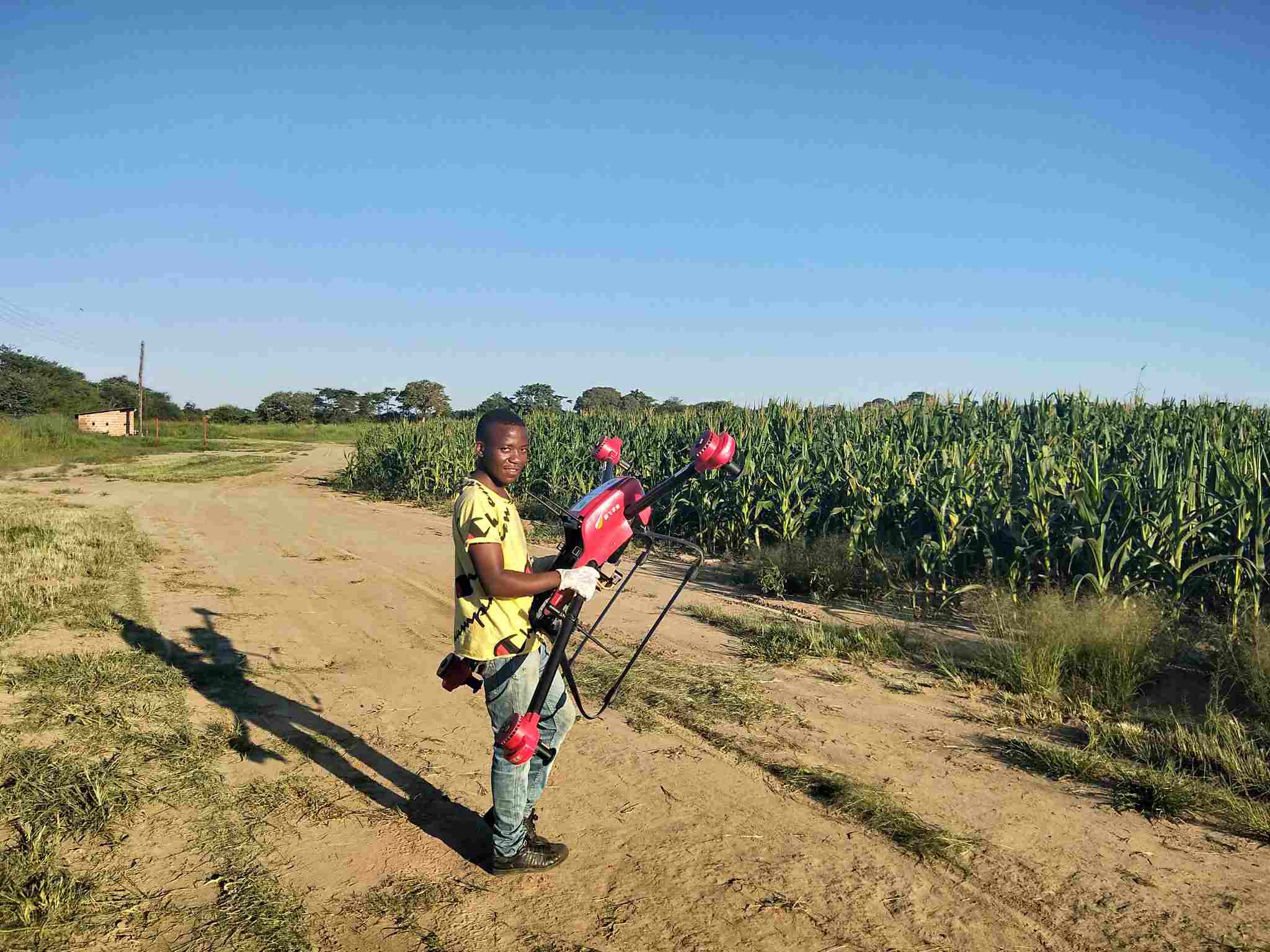 Fraser Zhang describes the pest as a ‘crop-killing monster’, since it not only eats maize but also attack 80 additional crop species, including wheat, sugarcane, sorghum and ginger. “At daytime, the fall armyworm caterpillars usually hide inside the central part of corn and sometimes burrow into the soil. When they grow older, they would generate large quantities of frass to block the whorls, making it difficult for chemicals to contact the pests.”

When facing such tough situation, Zhang realised that the combat against fall armyworm needs to go aerial. So, he reached out to XAG for its precision UAS spraying solution. During last years’ growing season, his team has conducted a series of field experiments and practical operations on three commercial farms, covering approximately 200 hectares of croplands.

At Kalele Farm, located in Kabwe, Zambia, fall armyworms were successfully defeated on 30 hectares of heavily infested cornfield. “The farm manager thought his maize crops couldn’t stand a chance against the pests and decided to place a bet on new tech. We utilised the spraying drones to apply chemical treatment twice, and the result was quite satisfying as a yield loss was avoided,” Zhang said. 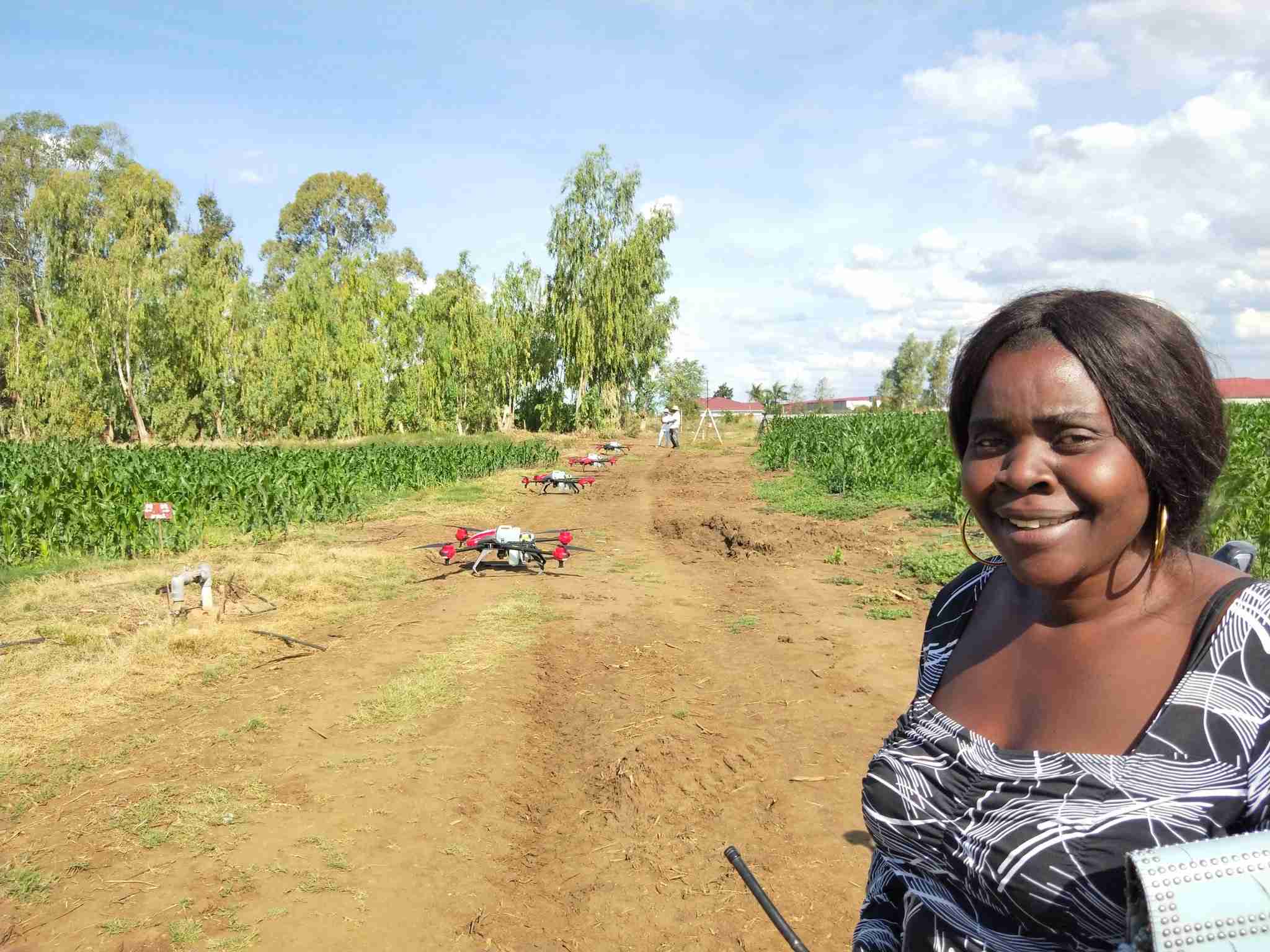 This is how Zhang elaborated the solution mechanism.

“First, drones should be deployed for operation after sunset, when the nocturnal pests stop concealing themselves. Second, with the intelligent atomisation spraying system, the drone can target pesticides uniformly onto the leaves, whorls and stems of the corn. Of course, low-toxicity systemic insecticide would be more effective to increase pest mortality and protect the plants.” 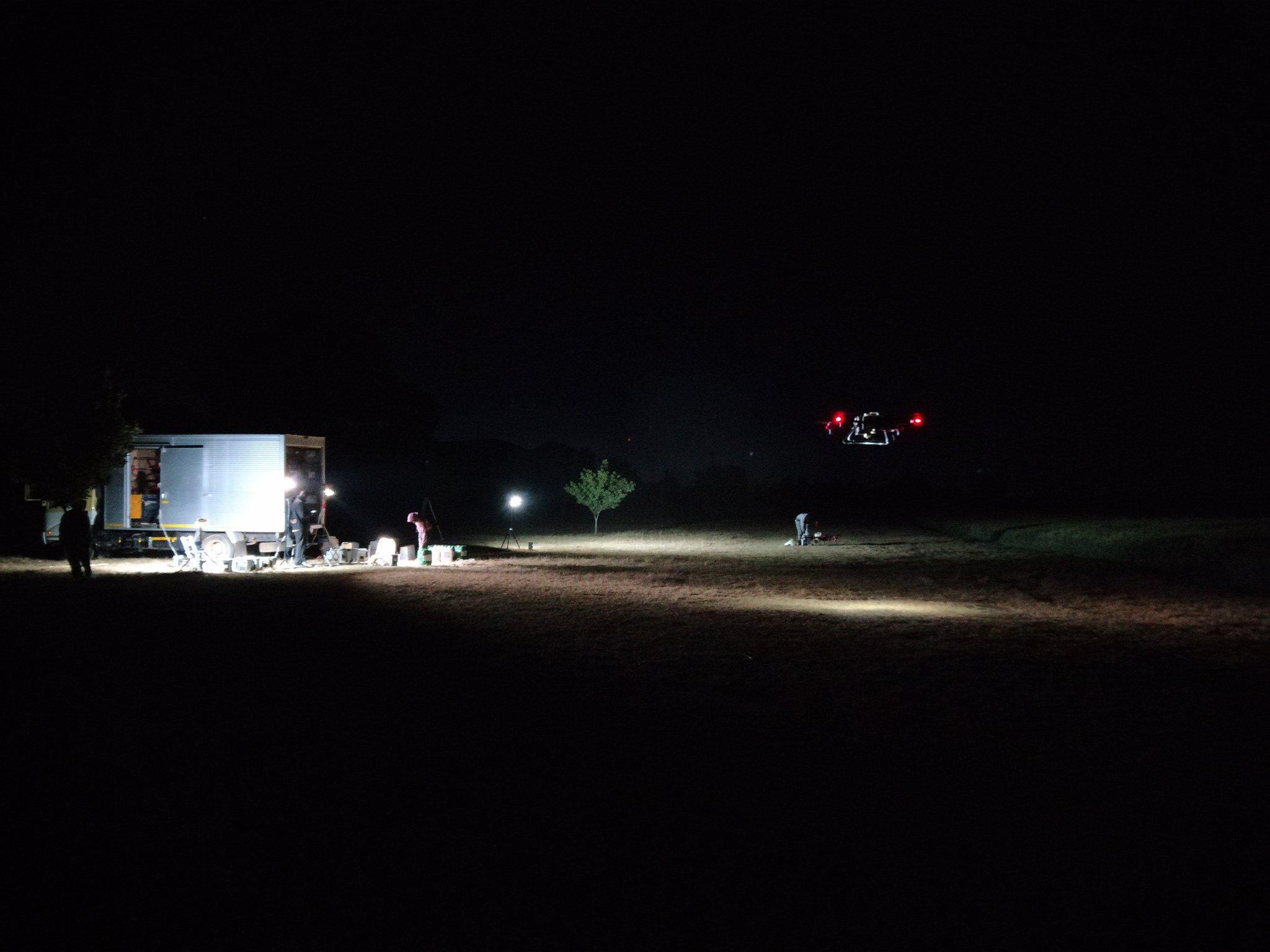 As for the future plan, Fraser Zhang intends to expand his agribusiness and supply smart agriculture equipment to other nearby African countries, such as Uganda, Malawi and Rwanda, which are also subject to the torture of fall armyworm.

An Integrated, Tech-backed Campaign in China

In China, the fight against the ‘fearlessly’ marching fall armyworm is also intractable. Since the confirmation of its presence in January 2019, the pest has reached 21 provinces and is yet to invade the northeast corn-production area. With experience of prevention and treatment on other armyworm species, the agricultural ministry stays highly alert to this new invader. The Yunnan Province, located in Southwest China, was the first to be attacked by fall armyworm migrating from neighbouring Myanmar. It is also the most severely afflicted region, with 86,000 hectares of croplands being infested by mid-June.

“I have never seen such an aggressive pest before. Instead of a picky eater, it can encroach all parts of the maize plant including leaf, whorl, stem and cob. Especially, if the pests attack the young crop at its early whorl stage, the maize might reach a condition called ‘dead heart’ in which the plants stop growing anymore,” Bai said.

Fall armyworm was first spotted in Wenshan at the end of March, when local farmers had no idea what it was or mistook it as other similar pests. Villagers’ slow response to the ambush of fall armyworm and their initial inability to identify this species have resulted in an extensive infestation among corn and sugarcane fields. Crop failures put many farmers’ livelihood at risk and forced them to switch to grow other crops immune to this pest disease. 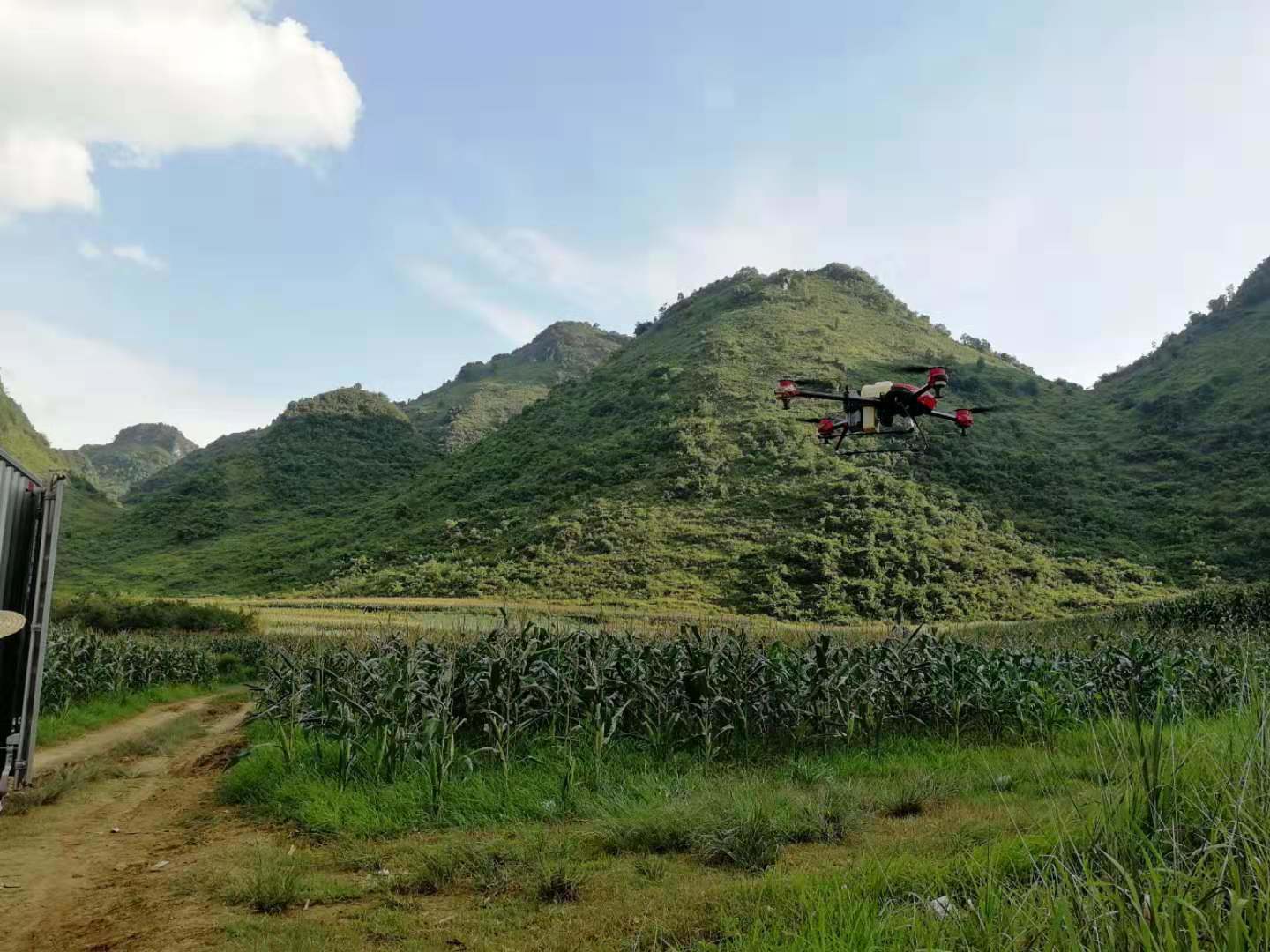 Under such circumstance, chemical control was justified to curb the spread of fall armyworm. However, the manual spraying approach widely used by Chinese farmers is neither effective nor sustainable.

“When you spend the whole day hand spraying one infested area, you would end up finding out that the pests have already invaded other parts of the land that was originally intact. Besides, crops here are mostly grown in mountains, where large ground-based machines are not flexible enough to operate,” Bai explained the reason.

This agricultural combat requires a prompt, effective large-scale operation backed by drones, which are nimble enough to reach tall plants on mountainous area. In June, under the guidance of local authority, Bai Anwei and his team participated a three-week intensive operation with seven P Series plant protection UASs from XAG to spray for the crops infested by fall armyworm. 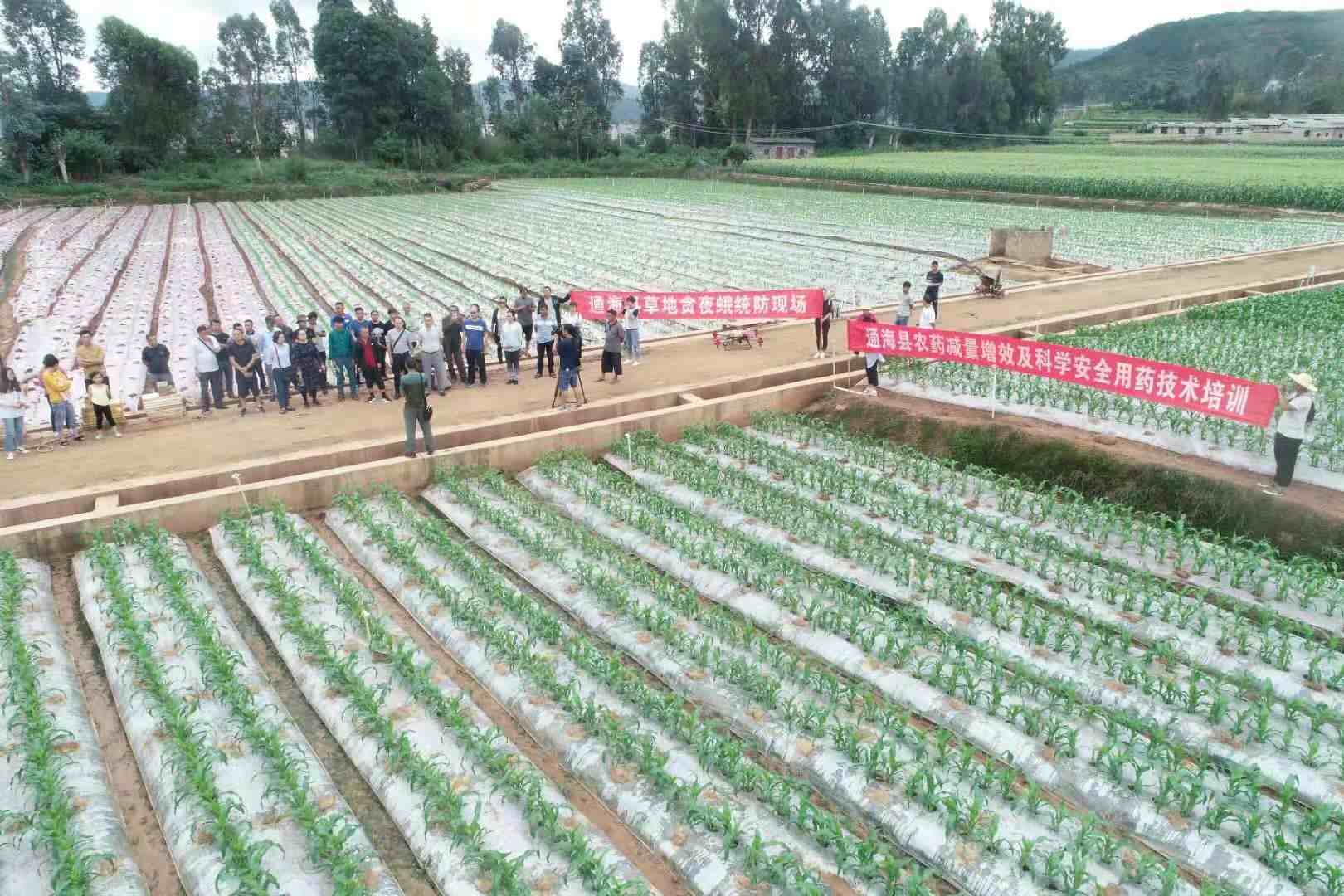 These were tough days, though. During the operation, Bai and other drone operators often worked from morning till night to offer treatment on as many as farmlands, despite that pesticide spraying is most effective at night when the pests venture out for feeding. Bai is clearly aware of the best operation time, but he had no choice but to work day and night because of the large-scale invasion.

According to statistics published by the local government, fall armyworm was detected in 15,000 hectares of cornfields in Wenshan by the end of July. The affected area is too large whereas sufficient smart devices and crop protection professional are both lacking. With only 7 drones available for the operation, Bai Anwei is one of the few UAS crop protection providers in this less developed region. 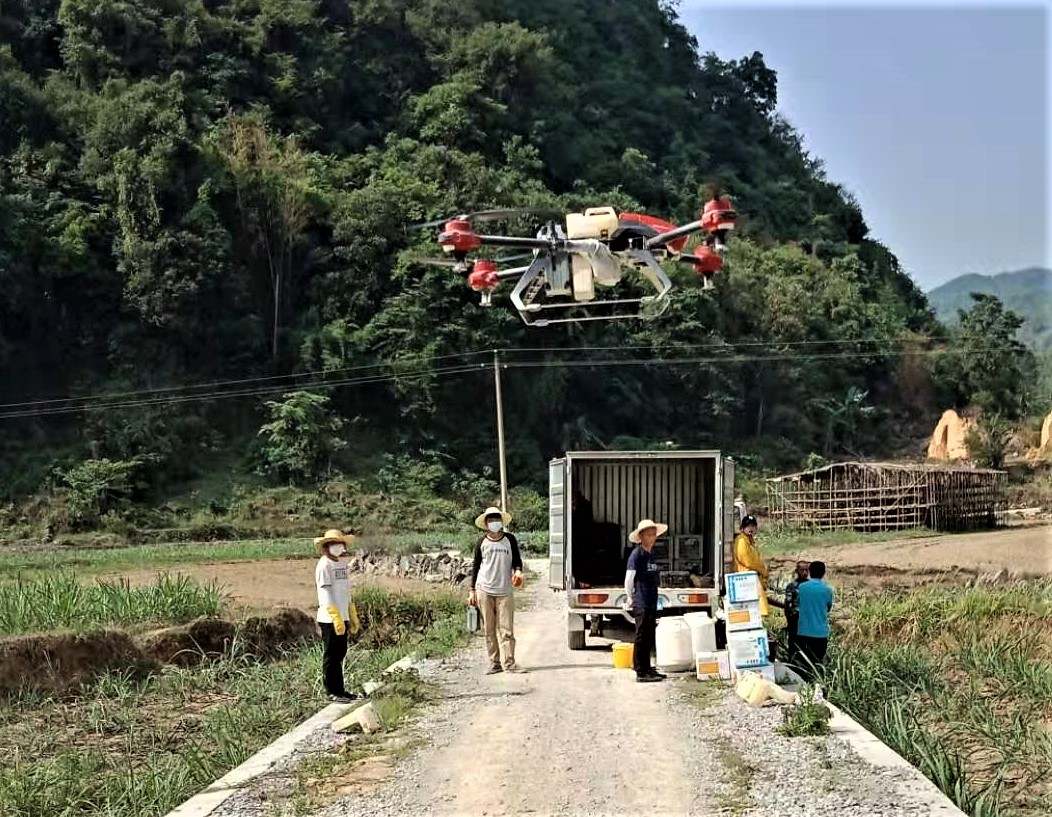 Smallholders’ reluctance to accept new technologies for agricultural production is one of the main reasons why drone remains uncommon in Wenshan. Nevertheless, the aerial battle against fall armyworm has changed the attitude of many local farmers who were sceptical towards agriculture drones at the very first beginning. On nearly 270 hectares of croplands that Bai’s drones had winged over, the pest damage was managed to its minimum.

“XAG’s drone enables a unique spraying application that makes insecticides more evenly adhere to a broader crop surface. Having witnessed its high efficiency and cost-effectiveness, farmers rushed to sign up for our service, hoping to save their broken lands,” Bai said.